Though always left of center, the Atlanta-based Southern Poverty Law Center (SPLC) once had a reputation as a fairly objective civil rights group. Founded by direct-

marketing millionaire Morris Dees and partner Joseph Levin Jr. in 1971, the SPLC made important and honorable contributions to many of the historic civil rights gains of the 20th Century. According to its own materials, the SPLC was “internationally known for tracking and exposing the activities of hate groups.”

Alas, “power corrupts,” as it goes, and the SPLC, having amassed tremendous power and wealth over the years, has regrettably become corrupt to its core. By way of an ever-escalating wave of “us-versus-them” money-grubbing schemes, Today’s SPLC has morphed into a far-left political activist outfit, famous for promoting a panoply of extreme liberal causes.

“Today’s SPLC spends most of its time – and money – on a relentless fund-raising campaign, peddling memberships in the church of tolerance with all the zeal of a circuit rider passing the collection plate. ‘He’s the Jim and Tammy Faye Bakker of the civil rights movement,’ renowned anti-death-penalty lawyer Millard Farmer says of Dees, his former associate, ‘though I don’t mean to malign Jim and Tammy Faye.’

“The American Institute of Philanthropy gives the Center one of the worst ratings of any group it monitors,” continued Silverstein. “Morris Dees doesn’t need your financial support. The SPLC is already the wealthiest civil rights group in America, though [its fundraising literature] quite naturally omits that fact. … ‘Morris and I…shared the overriding purpose of making a pile of money,’ recalls Dees’ business partner, a lawyer named Millard Fuller (not to be confused with Millard Farmer). ‘We were not particular about how we did it; we just wanted to be independently rich.’” (You say Fuller. I say Farmer. The two Millards say “call the whole thing off.”)

So, what happens when a dragon slayer – paid per dragon head – runs out of real dragons to slay? Well, he invents new ones, of course. Gotta keep those sprinklers-a-sprinklin.’ (According to Harper’s, “Dees bought a 200-acre estate appointed with tennis courts, a pool, and stables.” SPLC’s 2008 Form-990 shows net assets of over 219 million at the beginning of that year. Yup, there’s a spate to be made in the hate trade.)

“The Ku Klux Klan, the SPLC’s most lucrative nemesis, has shrunk from 4 million members in the 1920s to an estimated 2,000 today [year 2000], as many as 10 percent of whom are thought to be FBI informants. But news of a declining Klan does not make for inclining donations to Morris Dees and Co., which is why the SPLC honors nearly every nationally covered ‘hate crime’ with direct-mail alarums full of nightmarish invocations of ‘armed Klan paramilitary forces’ and ‘violent neo-Nazi extremists…’

So, sadly – shamefully, really – today’s SPLC has become nothing more than a “non-profit” extension of the black helicopter, Huffpo-wing of the Democratic Party – a gaggle of partisan hacks bent on lining their pockets, defaming good people (along with the bad) and filling DNC coffers. (SPLC Director Mark Potok even doubles as aHuffington Post columnist. Seriously. They make it that easy.)

The real problem lies in the fact, however, that the SPLC holds itself out as an objective monitor of potentially violent or subversive hate groups. It presents to municipal, state and federal law enforcement, regular “intelligence files” and an annual “Year in Hate” report. Ostensibly, these reports contain facts – even actionable intelligence – aimed at helping law enforcement officials prevent and/or monitor potentially violent criminal activity.

Bishop Harry Jackson, Jr: Will You Stand With Me?

Then? Perhaps. Now? Not so much.

In recent years the SPLC reports have been utterly tainted – weaponized and used against the leftist group’s ideological and political adversaries. This is a despicable, bad faith abuse of others’ good will, and of the SPLC’s past reputation.

Case in point: Recently, the SPLC came under fire for comparing the “Tea Party” movement and other grassroots conservatives to “terrorists.” Potok slandered “Tea Party” goers, suggesting that “they are shot through with rich veins of radical ideas, conspiracy theories and racism,” and are widely linked to “hate” and “vigilante groups.” Of course there are always a few nuts in any movement, but clearly Potok’s intent was to defame tens of millions of patriotic “Tea Partiers,” simply because he disagrees with them.

It was earlier reported that Janet Napolitano and the Department of Homeland Security relied upon similar reports by the SPLC in preparing the DHS’ own slanderous – now infamous – “Right Wing Extremist” report. You may recall: it painted pretty much all conservatives with that broad, multi-colored brush of “domestic terrorism.” (The report was later pulled, and Napolitano forced to apologize in shame.)

Even more recently, the SPLC launched another in a series of politically motivated attacks against a well-respected Christian organization. The group arbitrarily tagged as an official “hate group” Americans for Truth about Homosexuality (AFTAH).

AFTAH promotes biblical morality, opposes the radical homosexual activist lobby and publicly decries both violence and hatred against homosexuals or anyone else. Although it has been in operation for a number of years, the SPLC only recently labeled AFTAH a “hate group” after being pressured by the Chicago-based “Gay Liberation Network” to do so. 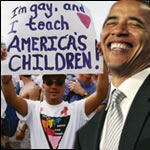 GLN is a fringe group of self-described Marxists and sexual anarchists best known for disrupting peaceful Christian gatherings with raucous, bullhorn-laden protests. In a twist most ironic, GLN leader Bob Schwartz once threatened AFTAH founder Peter LaBarbera in front of witnesses, telling him that if the police weren’t present at a rally, he would have pushed LaBarbera into oncoming traffic. (“Hate crime, anyone?” Love that “tolerance” and “diversity.” Where’s the SPLC when you need them?)

You can only cry wolf so many times before people begin to ignore you. Today, the SPLC’s “hate group” reports have begun to resonate almost exclusively within a far-left echo chamber. Newsflash:Moveon.org wants Bush tried as a “war criminal,” Charlie Sheen thinks the U.S. government was behind 9/11 and, yes, the SPLC has once again awarded its now meaningless “hate group” distinction to yet another conservative organization with which it is admittedly – in every way – both politically and ideologically opposed. Who would’ve thunk it?

Don’t get me wrong. Again, in the past, the SPLC has actually done some good by identifying and monitoring real hate groups such as the KKK, neo-Nazis and Skin Heads.

But now, regrettably, the SPLC has traded in its limited usefulness for radical left-wing activism. It has become much like that which it previously sought to expose. Today it uses the very tactics employed by white nationalists and other bona fide hate groups to malign large groups of people whom the SPLC most decidedly “hates.”

It’s nauseatingly transparent. With empty, ad hominem attacks and pejorative “hate group” smears, the SPLC strives to politically marginalize its ideological opponents. It’s a cynical “guilt-by-false-association” scheme, through which the SPLC hopes – in the public mind’s eye – to equate Christians, “Tea Party” conservatives and other traditionalists to the KKK and neo-Nazis.

Still, in going after Americans for Truth, the GLN surprisingly betrayed its SPLC ally by publicly acknowledging SPLC’s nefarious tactics. GLN boasted that this was the strategy all along. The Gay Liberation Network’s stated goal in goading the SPLC to label AFTAH a “hate group” was to “help assist” in AFTAH’s “political marginalization.”

Of course, by kowtowing to an already deeply marginalized GLN; by so obviously abusing its once-respectable reputation; and by spending its last remaining political capital on such folly, the SPLC has only succeeded in further marginalizing itself.

But, as they say: What’s good for the goose… Let’s try it on for size. It’s a “hate group,” mudslinging good time! In exercise of the SPLC’s trademark “I-know-you-are-but-what-am-I” criterion for arbitrarily determining “hate group” status, I hereby declare the Southern Poverty Law Center an “anti-Christian, anti-conservative hate group.” There, it’s official. Try it. It’s fun!

Matt Barber is an attorney concentrating in constitutional law. He serves as Director of Cultural Affairs with both Liberty Counsel and Liberty Alliance Action. Send comments to Matt atjmattbarber@comcast.net. (This information is provided for identification purposes only.)