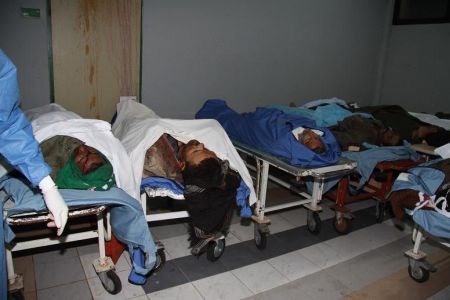 Thousands of innocent unarmed civilians have been murdered by the US, French, UK, and Canadian armed forces. A thousand times more civilians will be murdered by NATO forces than by Gaddafi security forces. $Billions in damages against civilian infrastructure will be inflicted by the US, Canada, the UK and France in Libya.  According to long standing international laws this UN backed war of aggression against Libya is a gross violation of international law.  According the United Nations own Charter this action by the U.S., French, UK, and Canadian armed forces are illegal.   According to International law their actions constitute crimes against peace and crimes against humanity.

What The Bankers aka; NWO Had In Mind, When British Petroleum Orchestrated The Gulf Oil Spill.

The crisis in Libya, however tragic it might be, is an domestic matter. Libya has not attacked any other country nor has the Libyan government made any threats of an armed attack against any other country. However, the US, France, the UK and the Canadian governments have all ordered their armed forces to launch armed attacks against Libya in direct violation of the UN Charter and International law.

Libyan End Game: Hopes Of The Rothschild’s Federal Reserve: Backstabbing Of The Middle East A
rabs –> IN ORDER TO GET OUT OF THE KISSINGER T-BILL DEBT

4. All Members shall refrain in their international relations from the threat or use of force against the territorial integrity or political independence of any state, or in any other manner inconsistent with the Purposes of the United Nations

7. Nothing contained in the present Charter shall authorize the United Nations to intervene in matters which are essentially within the domestic jurisdiction of any state or shall require the Members to submit such matters to settlement under the present Charter;In 1950, the Nuremberg Tribunal defined Crimes against Peace, in Principle VI, specifically Principle VI(a), submitted to the United Nations General Assembly, as:

(i) Planning, preparation, initiation or waging of a war of aggression or a war in violation of international treaties, agreements or assurances;
(ii) Participation in a common plan or conspiracy for the accomplishment of any of the acts mentioned under (i).

Saddam Hussein was accused and hung for allegedly killing a few hundred people in his own country.  In comparison the US killed over 1 million Iraqi civilians in that US / NATO war of aggression. Clearly the United States launched a war of aggression against Iraq.  The U.S. committed the heinous crimes of crime against peace, war crimes, and crimes against humanity as U.S. president George W Bush publicly admitted.  Saddam Hussein nor any political or military member had anything to do with the attacks on U.S. soil on September 11, 2001.

Afghanistan and their Taliban ruling party didn’t attack the US or any other NATO country nor did they kill any US or NATO citizen and yet the US / NATO launched a war of aggression against Afghanistan on October 7, 2001.  Less than 1 month later, in November 2001 U.S. committed their first major war crime when they slaughtered as many as 3,000 captured Taliban prisoners (POWs) outside of Mazar-i-Sharif. Since then the U.S. and NATO forces have murdered  tens of thousand of innocent Afghan civilians in that US / NATO war of aggression.  Throughout the war the U.S. kidnapped and tortured thousands of Afghan civilians.  Hundreds died as a result of being tortured by agents of the U.S. government.

A war crimes tribunal must be formed immediately.  France, the US, the UK and Canada are committing the very same atrocities as those committed by Nazi Germans in WWII.  The Nuremberg Trials, that followed WWII, were a series of military tribunals for the prosecution of prominent members of the political, military, and economic leadership of the defeated Nazi Germany.  We must now demand that such trials be held to prosecute US President Barack Obama, US Defense Minister Robert Gates, Canadian Prime Minister Stephen Harper, Canadian Defense Minister Peter MacKay, French President Nicolas Sarkozy, French Minister of Defense Gérard Longuet, UK Prime Minister David Cameron and UK Defense Secretary Dr. Liam Fox – for violating international law and the laws of war.

The indictments against the political leaders of France, the US, the UK, and Canada are for:

The evidence speaks for itself. The leaders of the US and other NATO countries have committed the above named crimes. Gaddafi is guilty of killing his own people in order to put down an armed rebellion that was started by foreign paid and controlled mercenaries and terrorists. The US and NATO forces are killing thousands of innocent and unarmed Libyan civilians.  The UN backed war of aggression is – a gross violation of International law.

Evidence of a war of aggression in Libya by U.S.

U.S. Special Forces on the Ground in Libya, Covert Operation – in violation of UN Resolution 1973

LIBYA: US Interests at stake

Tanks Don’t Fly – 58th Speaker of the United States House of Representatives from 1995 to 1999 reveals U.S. armed attacks in Libya have nothing to do with enforcing a no-fly zone.  U.S. in violation of UN Resolution and of International law.

Evidence that Muammar Gaddafi has been fighting CIA paid mercenaries in Libya– – CIA personnel were sent in to contact opponents of Libyan leader Muammar Gaddafi and assess their capabilities, two U.S. officials said.  “They’re trying to sort out who could be turned into a military unit and who couldn’t,” said Bob Baer, a former CIA case officer. These statements prove that the CIA were ordered by Obama to enter Libya to form mercenary units. US money was used to recruit and form these armed mercenary units. A “mercenary” force, is basically a military unit.  UN General Assembly Resolution 2465, designated mercenaries as outlaws.

Under Article 47 of Protocol I of the Geneva Conventions relating to the Protection of Victims of International Armed Conflicts it is stated in the first sentence “A mercenary shall not have the right to be a combatant or a prisoner of war.”

On 4 December 1989 the United Nations passed resolution 44/34 the International Convention against the Recruitment, Use, Financing and Training of Mercenaries. It entered into force on 20 October 2001 and is usually known as the UN Mercenary Convention.

A mercenary is any person who, in any other situation:

(a) Is specially recruited locally or abroad for the purpose of participating in a concerted act of violence aimed at:
(i) Overthrowing a Government or otherwise undermining the constitutional order of a State; or
(ii) Undermining the territorial integrity of a State;

Article 2 makes it an offense to employ a mercenary and Article 3.1 states that “A mercenary, as defined in article 1 of the present Convention, who participates directly in hostilities or in a concerted act of violence, as the case may be, commits an offense for the purposes of the Convention.”

USA On Clinton’s Libya: Who Side Are You On? ~ Libya Like Iceland, Is Energy Efficient & Inside Trader Rothschild Will Not Have It BY Using Obama/USA To Murder Them Into Subservience.

World War 3 ~ Rothschild To Strike The Anvil While The Metal Is Still Hot!

Won’t happen!  Have you forgotten the time when members of the Ohio National Guard on Monday, May 4, 1970 opened fire on anti-war protesters at Kent State University, killing four students and wounding nine others.