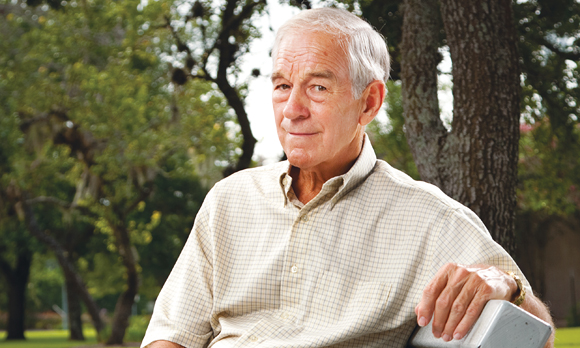 In June of 1976, I was Ron Paul’s speechwriter. Shortly after I joined his staff as his newsletter writer and economic analyst, I recommended that he do what I had been doing for a year: buy a Code-A-Phone telephone answering machine and make a weekly 3-minute recording for people in his districts to call. He could send the tape to his office in the district, where the machine would be set up at a local phone number. Residents could call it for free. He thought this was a good idea. So began his weekly speeches.

I wrote his first talk. He later told me that he didn’t like reading a script written by anyone else, so he had decided to record his own. As far as I know, that was the last speech anyone ever wrote for him.

He used that machine for the next two-and-a-half years. After his defeat in November 1976, he posted a weekly phone message. The weekly report became a tool for a comeback. In 1978, he defeated the man who had barely defeated him (268 votes) in 1976.

So, having been his only speechwriter, I will now offer my second speech that he will not deliver.

My Fellow Americans, as an earlier President from Texas used to say.

I would like to take this opportunity to say something that is both profound and memorable. The trouble is, only two inaugural addresses are remembered today, Lincoln’s second inaugural and John F. Kennedy’s only inaugural. Lincoln said these words: “With malice toward none and charity toward all.” Those are fine words. Kennedy said: “Ask not what your country can do for you. Ask what you can do for your country.” I especially like the first sentence.

Given the fact that hardly anyone remembers an inauguration speech, the likelihood of my saying something both profound and memorable today is low. Therefore, I have decided to do something memorable instead.

I have in front of me a piece of paper. I wrote it this morning. Let me read it to you.

From this point on, you are not obligated to conform to rules and regulations issued under executive orders. Of course, the various executive departments of the United States government will do their best to ignore this, so you had better check with your lawyer.

Just in case someone is prosecuted under a now-defunct executive order, I will pardon anyone so convicted. I may have to spend the second half of my first term in office signing pardons, nine to five, but that would be a very good use of my time. I will come out of the oval office to give a few speeches and hold some press conferences, but you will know that I am doing useful work in my office. I am going to get my branch of the government off people’s backs. I say this with malice toward none and charity toward all.

I hope to have good relationship with the press. If some diligent reporter digs up some dirt on what some agency has done, legally or illegally, or in planning to do, he can ask me about it at a press conference. I’ll do what I can to fix it. Because the government is spying on the people, the least I can do is to cooperate with the press when the press spies on the government.

I will run my office with these rules:

First, I will veto any bill that I think is not authorized by the Constitution. If Congress overrides my veto, that is Congress’s responsibility. They call me “Dr. No.” That’s who I am.

Second, I plan to close hundreds of American military bases in foreign nations. They will be auctioned off, with the money going to reduce the federal deficit. I will announce the first action no later than March 1 of this year.

Third, I will ask Congress to mandate a complete audit of the Federal Reserve System annually by the Government Accountability Office. I want to know where the government’s gold is and who has legal title to it.

Fourth, this afternoon, I will order the Joint Chiefs of Staff to plan the removal of all troops from Afghanistan this year, preferably by June 30.

Fifth, I remind the voters and the world that anyone with the power to fix the nation by political action has the power to destroy the nation by political power. I am not here to make America better. I am here to veto laws that will hinder American citizens from making America better. I am here to help keep the federal government from making America worse.

In his first letter to Timothy, chapter 2, the Apostle Paul told Timothy to tell the churches to pray for civil rulers. I strongly suggest to churches they do just this, weekly. Twice a week would be twice as good.

Now, I must bring this speech to a close. I wish you the best in building a better America. I will do what I can to free you from the burden of excessive government regulations, so that you can do this.