NWO Rothschild Purchases Weather Central: Why? To Control The Warming Hype What Else?

By Paul Driessen and Madhav Khandekar

What a month it’s been. Rejecting claims of looming cataclysm, the Nongovernmental International Panel on Climate Change (NIPCC) issued Climate Change Reconsidered-II on September 17. This report by 50 experts documents actual planetary temperature, climate, and weather in recent decades – and the ways alarmist scientists have manipulated data, graphs, computer models, and weather events to make it appear that human influences are much greater than they actually are.

Rothschilds And The Geoengineering Empire

On September 20, the U.S. Environmental Protection Agency proposed tough new standards for carbon dioxide emissions (EPA calls it “carbon pollution”) from future power plants – ignoring the fact that this plant-fertilizing gas is essential for virtually all life on Earth. The standards would effectively prevent construction of new coal-fired plants, which could not possibly comply. Older plants would gradually be closed down and, as the limits are ratcheted downward, even gas-fired power plants would be affected.

The September 26 release of the fifth Intergovernmental Panel on Climate Change report marked sea changes for this politicized organization. Though it tried to obfuscate the fact, the panel finally admitted that its models don’t work very well and there has been no global warming for 16 years. IPCC Chairman Rajendra Pachauri nevertheless still insisted that there is “definitely an increase in our belief” that humans are “responsible for climate change,” and his organization is now 95% confident it’s been right all along.

On October 15, the U.S. Supreme Court agreed to review a lower court decision that said EPA could use its regulation of automobile emissions as a springboard to impose power plant and other stationary source emission standards. The court said it would not reconsider its 2007 decision that allowed EPA to treat carbon dioxide as a “pollutant” and “threat to human health and welfare.” However, litigants are certain to raise that central issue in their coming arguments before the court.

All in all, for purveyors of climate alarmism, the forecast calls for increasing cloudiness, severe thunderstorms, and stronger hurricanes for months and years to come. That is hardly surprising. 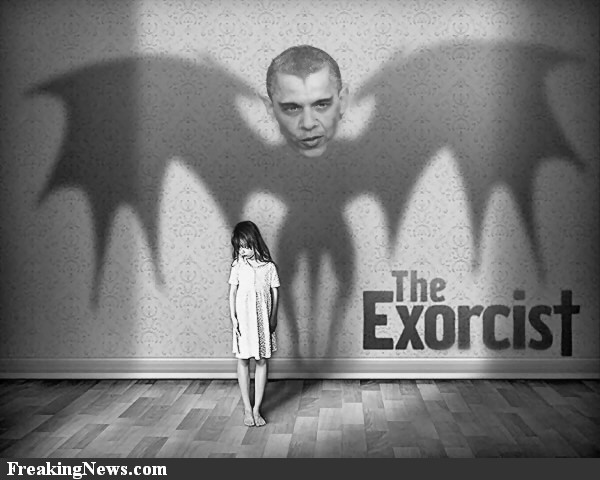 The alarmists have systematically assaulted and corrupted genuine science. They have injected subjective values and ideological tests, while eliminating the most vital components of the scientific method: comprehensive, independent, empirical, and transparent processes that, above all, require that hypotheses and models be confirmed by actual observations, or be rejected and replaced by new ones.

What began as an honest inquiry into possible roles of human activities on “global warming” evolved into assertions that mankind alone is responsible for “climate change,” and society’s carbon dioxide and other “greenhouse gas” emissions somehow replaced the complex, interrelated natural factors that have driven global warming, cooling, storms, droughts and other climatic changes throughout geologic history.

Claims of “manmade climate disaster” are now zealously defended by politicians, eco-activists, alarmist scientists, government agencies, and directors of scientific societies in the United States, Canada, and Europe – at all costs, to the exclusion of alternative explanations. They reject debate, vilify challengers to alarmist orthodoxy, and, by rejecting genuine climate science, make it impossible to predict future climate. Their chief goals are to redistribute wealth, keep “climate chaos” money flowing in – and justify demands that fossil fuels be eliminated, even for developing nations that need them to lift billions out of poverty.

That’s why Brazil, China, and India alone are emitting 180 times more plant-fertilizing carbon dioxide than can be attributed to energy from Alberta’s oil sands:  9 billion tons per year versus 50 million! Moreover, reality continues to be contrary to media stories and what alarmists now refer to as “climate disruption.” Even as atmospheric carbon dioxide levels reach 400 ppm (0.04% of all the gases in Earth’s atmosphere), average planetary temperatures have remained stable for 16 years, and heat-related “extreme weather” events are not increasing. That’s not surprising.

Temperatures In England Plummeting Over The Last Decade: Coldest Winters In 1,000 Years Are On Their Way!

The models assume all warming since the industrial revolution began is due to human carbon dioxide; exaggerate climate sensitivity to CO2 levels; program in temperature data that are contaminated by urban heat sources; and simplify or ignore vital climate influences like solar energy variations, cosmic ray fluxes, clouds, precipitation, ocean currents, and recurrent phenomena like El Niño and La Niña. It’s garbage in – garbage out. That’s why the IPCC climate models predicted that average global temperatures would be as much as 1.6°  F higher than they actually were over the past 22 years.

In fact, modest 1°-3°  F temperature increases, especially coupled with more carbon dioxide, would help green the Earth, spur plant growth, boost crop yields, and feed more people more nutritiously. However, many solar scientists now believe the sun has entered a low activity or cooling phase that could continue for decades. If that is the case, instead of average global temperatures increasing, they could well decrease a few degrees, which would adversely affect forests, grasslands, growing seasons, and the extent of arable acreage. Thankfully, that has not happened so far. 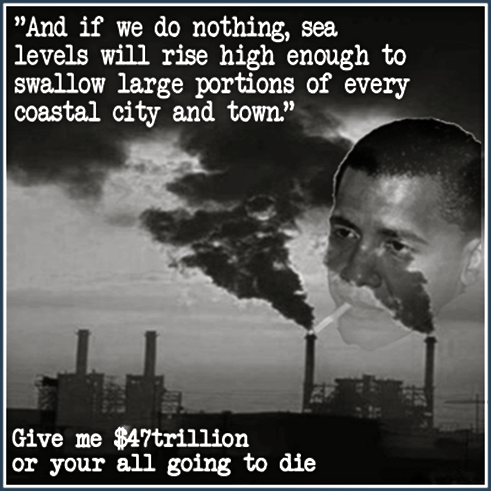 However, extreme cold weather events have occurred in recent years over Europe, northern India, and parts of North and South America. Four of the five snowiest northern hemisphere winters in the last half century have occurred since 2008, closing down villages and killing wildlife, farm animals, and people. Antarctic ice is at a record high. Arctic sea ice is back to normal, after the coldest summer in decades.

But these heavy snows – along with the highly publicized 2010 Russian summer heat wave, severe floods in Pakistan that same summer, and the Midwestern United States 2012 summer heat wave – were all part of natural climate variability, as books, research papers and NIPCC reports have documented.

Climate chaos false prophets like Pachauri, Al Gore, and David Suzuki predicted bigger, deadlier storms and flooded coastal cities, because of global warming. But the opposite has happened. It has been eight years since a Category 3 hurricane hit the United States: Hurricanes Katrina and Wilma, in 2005. That is the most years since the 1860s with no major hurricane making landfall. Tornado frequency is the lowest on record. Droughts are shorter and less extreme than during the Dust Bowl and 1950s. 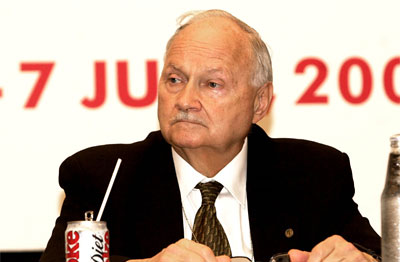 Sea levels continue to rise at a meager half-foot per century – which translates into a maximum possible increase of just 1 inch (25 mm) by 2025. Such a modest rise in sea level poses no threat whatsoever to humanity or coastal communities. It’s also a far cry from the 1-2 feet by 2100 that the IPCC predicted in 2007; the nearly 1-3 feet that its 2013 “scientific report” predicts just for 2081-2100; or the ridiculous 20 feet of sea level rise by 2100 that media-hungry climate charlatan James Hansen has forecast.

Coldest Winter In 1,000 Years On Its Way ~~ While Fear Mongers Of Global Warming, Laugh All The Way To The Bank!

The year 2013 witnessed the fewest U.S. forest fires in a decade; it ranks second in the fewest acres burned. But such conflagrations are really due to irresponsible policies on forest management and fire suppression.

In short, our Earth’s climate may well be changing, as it has repeatedly throughout history. But the changes are natural, and they have been far from catastrophic – nothing like the wooly mammoth ice ages or Little Ice Age, and no worse than the 1930s Dust Bowl. Moreover, the changes are natural in origin. They are not due to humans, and they are not occurring in ways the alarmists and their models predicted

We need hydrocarbon energy: to lift more people out of poverty, maintain our living standards, and ensure the wealth and technology to adapt to any climate changes that nature may visit upon us (with or without some localized contribution from humans). We also need genuine climate forecasting capabilities, to predict and prepare for those future fluctuations. Climate alarmism undermines all of this. 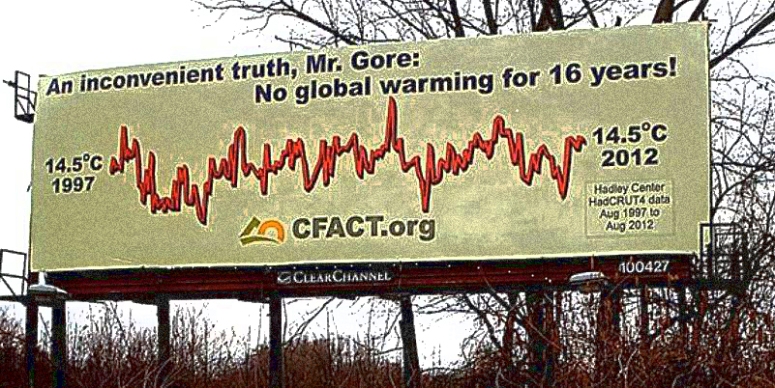 Paul Driessen is senior policy adviser for the Committee For A Constructive Tomorrow (CFACT), which is sponsoring the All Pain No Gain petition against global-warming hype. He also is a senior policy adviser to the Congress of Racial Equality and author of Eco-Imperialism: Green Power – Black Death. 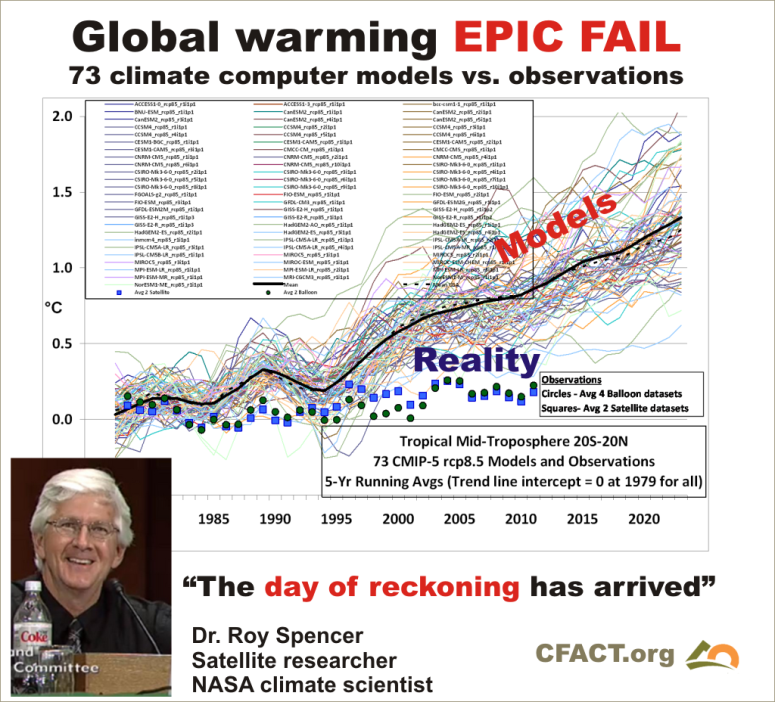