Thanks to the Mossad, Israel’s “Institute for Intelligence and Special Tasks”, the Hamas [aka; NWO Muslim Brotherhood] was allowed to reinforce its presence [To Oscillate Chaos] in the [Israeli] occupied territories.

Meanwhile, Arafat’s Fatah [Military] Movement for National Liberation as well as the Palestinian Left were subjected to the most brutal form of repression and intimidation.

Let us not forget that it was Israel, which in fact created Hamas [Israel & Hamas Are Rothschild Zionists]. Zeev Sternell, historian at the Hebrew University of Jerusalem, “Israel thought that it was a smart ploy to push the Islamists against the Palestinian Liberation Organisation (PLO)”. [This was to polarize & oscillate = chaos]. [This same polarize/oscillate = chaos is in its final phase ~ that of Hamas vs Israel to diminish Palestinian claim to their land].

Ahmed Yassin [Good Cop Pump Phase], the spiritual leader of the Islamist [Not To Be Confused With The Religion Of Islam] movement in Palestine, returning from Cairo in the seventies [They always return from somewhere ~ ‘Shah Of Iran’ & Abadi after 20 years returning from Britain to rule Iraq], established an Islamic charity association. [Islamist ‘bank politics’ is to Islam as zionism ‘bank politics’ is to Jew, they both usurp pump/dump the people]

Prime Minister Golda Meir [USA Bred Zionist], saw this as a an opportunity to counterbalance the rise of Arafat’s Fatah [Military] movement.

Billy Graham once assured a smug and superior Israeli Prime Minister Golda Meir that he would never conduct a “Billy Graham Crusade” in Tel Aviv, Haifa, or Jerusalem.

Billy Graham also remind President Nixon: “The Bible talks about two kinds of Jews. One is called the Synagogue of Satan”.

According to the Israeli weekly Koteret Rashit (October 1987), “The Islamic [political] associations as well as the university had been supported and encouraged by the Israeli military authority” in charge of the (civilian) administration of the West Bank and Gaza. “They ‘the Islamic associations and the university’ were authorized to receive money payments from abroad.” [Pump Phase Exploitation]

After writing the book exposing the fact that Israel and its Zionist leadership are nothing but pawns of the House of Rothschilds’ global counterfeiting-money laundering operation, Jack Bernstein was murdered by the Israeli intelligence agency, Mossad. Mr. Bernstein was a courageous man who gave his life to expose world Zionism and its Orwellian agenda for the global population. 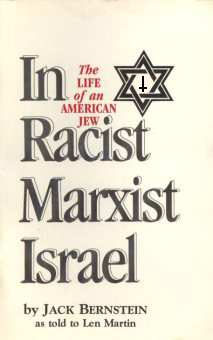 The Islamists [Good Cop Pump Phase] set up orphanages and health clinics, as well as a network of schools, workshops which created employment for women as well as system of financial aid to the poor. And in 1978, they created an “Islamic University” in Gaza. “The [Israeli] military authority was convinced that these activities would weaken both the PLO [Military] and the leftist [sic] organizations in Gaza.” At the end of 1992, there were six hundred mosques in Gaza.

Thanks to Israel’s intelligence agency Mossad (Israel’s Institute for Intelligence and Special Tasks) , the Islamists [Islamist is to Islam as zionism is to Jew they both usurp pump/dump the people] were allowed to reinforce their presence in the occupied territories. Meanwhile, the members of Fatah (Movement for the National Liberation of Palestine) and the Palestinian Left were subjected to the most brutal form of repression.

In 1984, Ahmed Yassin [Good Cop] was arrested and condemned to twelve years in prison, after the discovery of a hidden arms cache.

But one year later, he was set free and resumed his activities.

And when the Intifada (‘uprising’) began [Chaos], in October 1987, which took the Islamists by surprise [I Doubt It],

(The Islamic Resistance Movement): “God is our beginning, the prophet our model, the Koran our constitution”, proclaims article 7 of the charter of the organization. [Good Cop Yassin Now Reverses Rolls Into Bad Cop Dump Phase Because The Palestinians Woke Up] [U.S. Is In This Phase Now]

Ahmed Yassin was in prison when, the Oslo [PEACE] accords (Declaration of Principles on Interim Self-Government) were signed in September 1993. The Hamas NWO Muslim Brotherhood] had rejected Oslo [PEACE] outright. But at that time, 70% of Palestinians had condemned the attacks on Israeli civilians. Yassin did everything in his power to undermine the Oslo [PEACE] accords [Sounds Like What The Muslim Brotherhood Did As Well]. Even prior to Prime Minister Rabin’s death, he had the support of the Israeli government. The latter was very reluctant to implement the peace agreement.

The Hamas then launched a carefully timed campaign of attacks against civilians, one day before the meeting between Palestinian and Israeli negotiators, regarding the formal recognition of Israel by the National Palestinian Council. These events were largely instrumental in the formation of a Right wing Israeli government following the May 1996 elections.

Get Our Boy ‘Yassin’ Back Out There On The Ground.

Quite unexpectedly, Prime Minister Netanyahu ordered Sheik Ahmed Yassin to be released from prison (“on humanitarian grounds”) where he was serving a life sentence.

Meanwhile, Netanyahu, together with President Bill Clinton, was putting pressure on Arafat to control the Hamas. [Arafat was PLO not Hamas ~ Yassin was Hamas]

In fact, Netanyahu knew that he could rely, once more, on the Islamists [Yassin] to sabotage the Oslo [PEACE] accords. Worse still: after having expelled Yassin to Jordan, Prime Minister Netanyahu allowed him to return to Gaza, where he was welcomed triumphantly as a hero in October 1997.

Arafat [PLO] was helpless in the face of these events. Moreover, because he had supported Saddam Hussein during the 1991 Gulf war, (while the Hamas had cautiously abstained from taking sides), the Gulf states decided to cut off their financing of the Palestinian Authority. [Saddam was brought down by the U.S. because he decoupled his country from the Kissinger petrodollar and went to the gold standard ~ not the Rothschild standard of fiat currency and oil control]

Meanwhile, between February and April 1998, Sheik Ahmad Yassin was able to raise several hundred million dollars, from those same countries. The the budget of The Hamas was said to be greater than that of the Palestinian Authority. [Jordan is where ISIS mercenaries were trained]

These new sources of funding enabled the Islamists to effectively pursue their various charitable activities. It is estimated that one Palestinian out of three is the recipient of financial aid from the Hamas. And in this regard, Israel has done nothing to curb the inflow of money into the occupied territories.

The Hamas had built its strength through its various acts of sabotage of the peace process, in a way which was compatible with the interests of the Israeli government. In turn, the latter sought in a number of ways, to prevent the application of the Oslo accords. In other words, Hamas was fulfilling the functions for which it was originally created: to prevent the creation of a Palestinian State.

And in this regard, Hamas and Ariel Sharon, see eye to eye; they are exactly on the same wave length.

President Nixon Speaking On The Dangers Of The Synagogue of Satan Said This:

But Then It Appears President Nixon Was Cowed Into This:

The ‘Jewish homeland’ was from the start a Rothschild fiefdom orchestrated through the global secret society network of interbreeding families known as the Illuminati.

We need to drop the ludicrous, childish, labels of Jew and Gentile and Muslim and all this illusory crap and come together in the name of peace and justice for all. There is not a Jewish injustice or a Palestinian injustice, there is simply injustice.

Justice for one and no justice for another is ‘justice’ for no-one. For justice has no meaning unless it applies to all, and it will never apply to the Palestinians while the world stays silent and looks the other way. Rense