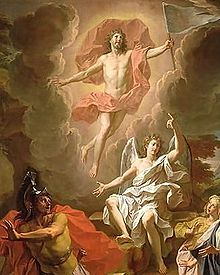 WE WILL WIN THIS BATTLE BETWEEN GOOD AND EVIL

The mystery and holiness surrounding this very special time of the year is palpable.  A gentle breeze has replaced winter’s bitter wind, and the sun again warms us our earth.  The memories of winter’s hardship and deprivation are beginning to fade.  Today Christians have awakened to the promise of new and everlasting life through the Resurrection of Jesus Christ.

Our Judeo-Christian Nation: Forbes – EVIL DID NOT REASON – ONLY WITH GUNS WAS THE UNITED STATES FOUNDED!

Both Passover and Easter celebrate freedom and new life.  Passover commemorates the freeing of the Israelites from slavery to the Egyptians.  The Ten Plagues were released upon Egypt when Pharaoh refused to grant the Israelites their freedom, and the last plague took the lives of all firstborn Egyptian children.  However, the firstborn of the Israelites were spared, as the Angel of Death “passed over” those homes marked with the blood of a lamb.

Easter is the celebration of the resurrection of Jesus from the dead and the salvation bestowed upon Christian believers through the sacrifice of God’s only son.  Jesus Christ is the “Lamb of God” who took away the sins of the world.

America’s Not A Christian Nation? – And I’m A Fat Lesbian Who Hates Hunting!

For several centuries after the death of Jesus, many Christians celebrated both Passover and Easter.

This Republic was founded on principles which came from the Judeo-Christian belief system.  These principles include the sanctity of life, the dignity of work and self-sufficiency, the obligation to deal fairly and honestly with others, and the responsibility to contribute meaningfully and lawfully to society.  Most of us were taught not to lie, cheat, or steal, and we live by those principles today.

America’s Gentile Whites, Died For The African’s Freedom In The United States

For that very reason, many Americans have been unable to grasp exactly what has occurred in our nation over the last 18 months and everything that has led up to it.  Beginning before most of us were born, in 1913, foreign bankers were given control over our economy and the coining of money by President Woodrow Wilson.  Although enacted while Congress was out of session, upon returning from recess, Congress did not act to repeal the takeover of the nation’s financial system by a private group of bankers who still control our economy today in violation of the U.S. Constitution.

Over the years we have seen a tremendous eroding of our national heritage and pride.  The scourge of abortion became the “law of the land” through the unconstitutional decision of Roe v. Wade.  Although the Supreme Court greatly overstepped its authority, its ruling was allowed to stand.  God’s people failed to stand up against such evil and uphold their God-given constitutional rights to outlaw a procedure which denied an unborn child the very life which the Constitution guaranteed.

Obama Did You Know: Founding Fathers First War, Was Against The Muslim Ottoman Empire..

The Framers of the Constitution never envisioned a court which was so powerful that it could commandeer the states into passivity.  The function of the judiciary was to provide “checks on the legislature and the executive branch and to perform “judicial review,” with all seats being retained based “on good behavior.”  Similarly, as acheck on the chief executive, the “Vice President and Cabinet can vote that the President is unable to discharge his duties.”

When is the last time that a Vice President and the President’s cabinet decided that the president could not perform his duties?  Why haven’t they done it now in the case of Obama, who is ineligible to serve?

We have drifted far from the spirit and intent of the Constitution by voting in entitlements year after year, term after term of our congressmen, senators and state and federal executives.  As a nation, we have become greedy and lost our incentive to work and remain independent as the government has continued to expand.  That is what government wants:  the dependency of many people so that it can continue to grow.  These entitlements must be stopped for two reasons:  they breed laziness and dependence on government, and there is no more money with which to pay them.

Government dependence also breeds fear.  We now have a nation where many people are afraid to speak up, do not know their constitutional rights, and are more concerned with what is on television than what their government is doing to them in the name of making things “easier,” all the while confiscating the freedoms which many of us hold so dear.  Every entitlement bears a price, and that price is a little bit more of our freedom.

I believe that most Americans now know that we have reached a turning point, an awakening, a reckoning.  We either return to constitutional governance or perish as Rome did.  Our government is financially and morally bankrupt.  We can either stand up and refuse to obey any more unconstitutional laws, mandates, and executive orders or succumb to the government criminals like sheep.  As sovereign citizens of our individual states, we possess the ability to nullify unconstitutional legislation.  We can expose corruption wherever we find it.  If millions begin to stand up, what will happen to the IRS?

Government schools have been overtaken by teachers’ unions with a strong leftist agenda, yet many continue to send their children to these institutions to obtain an education.  If we do not want more young minds indoctrinated into a socialist mindset, we need to teach our children ourselves.  Fifty years ago our parents raised us on one income, and it can be done again.  Teach your children what you want them to learn, not what a government bureaucrat wants them to learn, including introducing them to aberrent lifestyles as is now occurring in the state of Massachusetts.  If the government schools begin to empty out, there will be no need for them, and the federal government will have lost the control it now has over our children.

As a nation we have been brought to our knees with the usurper Obama and his regime who have seized control of our government and begun a march toward communism.  The fight which our parents fought in World War II is distant to many and not even a memory for most of us.  But now we find ourselves in the fight of our lives and for our country.  Just as the Founders did, we need to pledge “our sacred honor” to save this Republic.  The time is now, and the hour is short.  It is up to us, the “baby boomers” who in many cases were spoiled by our parents so that we could “have the things they never had.”

There is one thing, however, that our parents had which we don’t:  freedom. Our government has turned against us, passing draconian, Marxist legislation that we cannot allow to stand.  If we fail to act to remove the usurper and all others who were complicit in his ascension to power, then freedom will be but a distant memory.  The imposter government now in place seeks more and more of our money like an oversized beast with an insatiable appetite which will do anything to satisfy its desires.

The wealth we should have, the freedom to engage in commerce without taxes and encumbrances, the right to form constitutional militias to protect and defend our communities, must be resurrected.  The foreign bankers must be expelled, and our government must consist of only those who will uphold the Constitution above all else.  We can use the following as our guide as we dismantle the current debacle in Washington, DC, as the Framers did 235 years ago:

When in the Course of human events it becomes necessary for one people to dissolve the political bands which have connected them with another and to assume among the powers of the earth, the separate and equal station to which the Laws of Nature and of Nature’s God entitle them, a decent respect to the opinions of mankind requires that they should declare the causes which impel them to the separation.

We hold these truths to be self-evident, that all men are created equal, that they are endowed by their Creator with certain unalienable Rights, that among these are Life, Liberty and the pursuit of Happiness. — That to secure these rights, Governments are instituted among Men, deriving their just powers from the consent of the governed, — That whenever any Form of Government becomes destructive of these ends, it is the Right of the People to alter or to abolish it, and to institute new Government, laying its foundation on such principles and organizing its powers in such form, as to them shall seem most likely to effect their Safety and Happiness…

On this Easter Sunday, I believe that something is happening.  Something wonderful and brilliant, a renewal of belief in God’s hand upon this nation.  It is no coincidence that this is occurring during this holiest of seasons of the year.

We will win this struggle, regardless of the cost.  We will win because we have God on our side, and evil will be defeated.  Just as Jesus charged the twelve disciples to go out and spread the Gospel, so do we, as guardians of the Constitution and the freedom God guarantees us through it, need to go out and spread the word to everyone we meet that the time to institute new government is at hand.  Whether we survive as a republic or go down in history as another failed democracy turned to mob rule is dependent on what we do now.  By informing others of just how dire our situation is, we will be effecting much-needed change because we will be awakening the masses.  With 310,000,000 of us and 546 of them, it would seem there could be no way we could fail.

With God’s help, we will find the strength and means to do it.  This is our time.  We have a country to save.

Roman Catholic Vlad Tepes: Impaled The Muslim Brotherhood, Thus Saving His Country From The Islamic Headcutters Of The Ottoman Empire.