“Unemployed” respondents [U3] are those within the under-employed group who are NOT employed, EVEN for ONE HOUR a week, but are available and looking for work, inside the 12 month only criteria. Conversely This Says If You Work At Least 1 Hour Per Week You Are Employed.

(Cryptogon) – Real Unemployment Calculation Act looks to force the government to stop using an unemployment rated that under-reports true unemployment by up to 50%.

Congressman Duncan Hunter is pushing to have the official US unemployment number changed to be a figure that accurately reflects the true number of unemployed Americans.

While most Americans don’t know it, the government actually produces 6 different unemployment statistics from U-1 to U6 currently range from (4.2% to 14.9%).

The government publishes “U-3″ as the official number which currently stands at 8.2% but that statistic is manipulated so much with ‘exclusions’ and ‘adjustments’ it doesn’t even begin to show a true picture of US unemployment.

Representative Hunter is pushing to change the “U-5″ number as the official unemployment statistic to because it includes, among other exclusion or adjustments, the 87 million people who the government considered to have dropped out of the labor force altogether because they haven’t been able to find a job in such a long time.

His legislation the ‘Real Unemployment Calculation Act’ — a legislative fix that would require the Department of Labor to get real about what it tells the American people’ is currently being debated in congress. 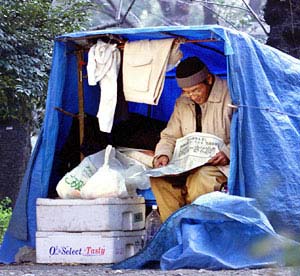 Millions of Americans are no longer even counted as UNEMPLOYED – they are now destitute, because their unemployment benefits ran out without any jobs for them.

HOW TO KEEP THE UNEMPLOYED NUMBER [U3] DOWN IN TIDE WITH THE DIMINISHING LABOR FORCE PARTICIPATION SO AS TO BAMBOOZLE THE U.S. CITIZEN TO THINK ALL IS WELL AND NO ONE IS DRIFTING INTO THE DESTITUTION PHASE.

Yesterday the Obama administration gutted those federal work rules, ignoring the will of Congress by issuing a policy directive that allows the Department of Health and Human Services to waive the work requirements for the Temporary Assistance for Needy Families (TANF) program.

The housing bust has taken a toll on Arizona, as 43.4 percent of houses have negative equity in them, the third-highest rate in the country. Housing prices fell a whopping 52.7 percent from the end of 2006 to the end of 2011, the biggest fall for any state in the U.S. except Nevada. More than 20 percent of the residents of the state are on Medicaid, the only state on this list to crack the top 10 in this statistic. However, underemployment is showing signs of improvement. The underemployment average for all of 2011 was 18 percent, where it was the sixth-highest rate in the country.

Like many of the states on this list, a bruised housing market led to the loss of jobs in the housing industry, leaving many Floridians in less than desirable employment positions. With housing prices cut nearly in half between the end of 2006 and the end of 2011, 45.1 percent of homes are underwater. GDP growth between 2010 and 2011 rose only 0.5 percent, the lowest rate on this list. The labor force out of work at least 15 weeks is 6.2 percent, tied for fourth highest of all states. The state has the highest percentage of people who are over 65, an age group that generally takes longer to find a new job following unemployment.

The difference between the official unemployment rate and the underemployment rate, 7 percentage points, is the lowest difference of any state on this list. This means that the underemployed tend to be officially unemployed compared to other states. Fortunately, South Carolina’s housing market did not crash as hard as other states. Only 19 percent of homes are underwater, a far better percentage than places such as Nevada, Florida and Arizona. The 8.5 percent drop in housing prices between 2006 and 2011 was the lowest on the list. Yet with consumer spending the biggest factor in determining the strength of the economy, South Carolina’s income per capita of $33,673, the lowest on this list, may make it more difficult than other states to emerge from its economic struggles.

When the U.S. automobile industry was on the brink of collapse several years ago, Michigan’s economy went into a downward spiral. Until June 2010, Michigan had the highest unemployment in the country, reaching 15.2 percent in the summer of 2009. While the situation has greatly improved since hitting rock bottom three years ago, the unemployment rate is still 1.2 percentage points above the national average. However, the underemployment situation has also shown improvement recently. Last quarter, 18.1 percent of people were considered underemployed, which was the fourth highest at the time. The drop of 0.7 percentage points is the biggest drop in underemployment of any state on this list.

California is one of only two states where more than a fifth of the labor force is underemployed. The state has the highest difference between the U6 and U5 percentage rates, indicating there are a higher percentage of people involuntarily working part-time than in any other state in the U.S. California has the sixth-highest percentage of homes underwater for all states, at 30.5 percent, and the 46.7 percent change in home prices between the end of 2006 and 2011 is the fourth-largest drop. Higher incomes could help boost consumer spending in the future, perhaps helping to bring down the underemployment rate. Income per capita for the state is $44,481, the highest of all of the states on this list.

Nevada’s highest-in-the-country unemployment rate does not provide an accurate portrayal of the job situation, as the underemployment rate is almost 10 percentage points higher than the official rate. The housing market has pummeled Nevada’s economy. Between the end of 2006 and end of 2011, housing values tumbled 59.9 percent, the sharpest decline of all 50 states. Now a whopping 61.2 percent of houses are underwater, the highest in the U.S. by more than 16 percentage points. As housing prices tanked, underemployment grew. The rate of job losers and people who have completed temporary jobs is 7.7 percent, higher than any state measured. Even as underemployment is falling, incomes are not rising particularly fast. Income per capita rose only 3.34 percent from 2010 to 2011, the second-lowest rate on this list, after North Carolina, and the fourth lowest overall.

← Americans Saying No To Corporate Grocery Control: Demand For Farmers Markets Booming In United States
Obama: The Only U.S. President To Be Sued Part I – Pravda.Russia →