NASHVILLE, Tenn. (Jan. 26, 2017) – A bill introduced in the Tennessee Senate would legalize medical marijuana for qualifying patients in the state, setting the foundation to nullify unconstitutional federal cannabis prohibition in practice.

Introduced by Sen. Steven Dickerson (R-Nashville), Senate Bill 1710 (SB1710) would allow individuals to possess medical marijuana if they suffer from one or more qualifying conditions. Dispensaries would be permissible under SB1710 to provide medical marijuana to qualifying patients as well. Patients would also have the option of naming a caretaker who could grow marijuana on their behalf.

Despite the federal prohibition on marijuana, measures such as SB1710 remain perfectly constitutional, and the feds can do little if anything to stop them in practice.

Legalization of medical marijuana in Tennessee would remove one layer of laws prohibiting the possession and use of marijuana, but [unconstitutional] federal prohibition will remain on the [ir] books.

FBI statistics show that law enforcement makes approximately 99 of 100 marijuana arrests under state, not [unconstitutional] federal law [rules]. By curtailing state prohibition, Tennessee could sweep away some of the basis for 99 percent of marijuana arrests.

Tennessee could join a growing number of states simply ignoring federal prohibition, and nullifying it in practice. Colorado, Washington state, Oregon and Alaska were the first states to legalize recreational cannabis, and California, Nevada, Maine, and Massachusetts joined them after ballot initiatives in favor of legalization [Nullifying The Fed Overreach] passed last year.

With 29 states allowing cannabis for medical use [Nullifying The Fed Overreach], the feds find themselves in a position where they simply can’t enforce [Unconstitutional] prohibition anymore.

“The lesson here is pretty straightforward. When enough people say, ‘No!’ to the [ir Way Ward Employee aka;] federal government, and enough states pass laws backing those people up, there’s not much the feds [Way Ward Employee] can do to shove their so-called laws [Deep State Rules], regulations or mandates down our throats,” Tenth Amendment Center founder and executive director Michael Boldin said.

SB1710 will need to pass the Senate Judiciary Committee before it can be considered in the full Senate. HB1749 had not been referred to a committee at the time of this report. 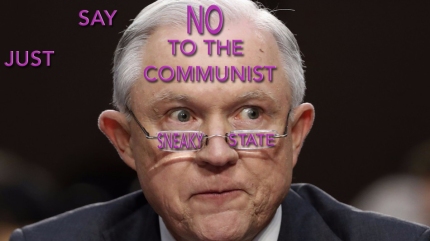