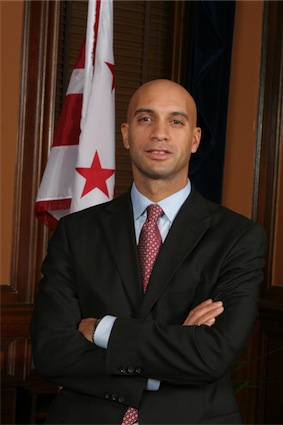 Notice Piece Of Shit & Communist Adrian Fenty, Posing Next To Red Star In His Office

The DC Election Board has refused an initiative to put the marriage issue before voters. Alan Wisdom of the Institute on Religion & Democracy tells OneNewsNow the city council was offered amendments to protect religious groups, but opted to reject them.

“We at the Institute are warning that this really shows the trajectory of same-sex marriage,” notes Wisdom. “The initial appeal is for tolerance, but ultimately same-sex marriage becomes tyranny that is imposed upon Christians and others who support traditional marriage, and they are forced in various ways to accept same-sex marriage.”

The Catholic Archdiocese of Washington, which provides many social services in DC, has told the council it will stand by its faith, meaning it might have to drop some of its services.

In essence, Wisdom says the city council is willing to bow to less than three percent of the population and turn against the faith community.

← Irena Sendler Was Up For The Nobel Peace Prize … She Was Not Selected. Al Gore “Inventor Of The Internet” Won, For A Pick And Choose Data Slide Show On The Global Warming Hoax.
Obama’s Civil Disobedience: Unconstitutional Czar Confronts Hannity For Riot Emoting Empathy! →