A little bird told me today that the worshipping Muslim collective of the Ground Zero community was having its weekly meeting this Friday at the Cordoba House Mosque, conveniently located next to the remains of the infidel community at Park Place 51 in Manhattan. The bird insisted it had reliable information from “insider” sources about a gathering of protesters, even though it was a day away from the big 9-11 rally. Some of them came to support everyone’s human right to say Allahu akbar while ramming planes into skyscrapers, while some others came to oppose it.

So I took my camera and went to take a look.

The bird lied. That is, the protesting community was there, and so were numerous media organs. But the anticipated Muslim teach-in, sit-in, and bendover-in by the local Islamic community had been suspended by the City until next week, to avoid possible scheduling conflicts with certain out-of-town Koran-burn-in communities.

A large BBC community was there, setting up a shop right on the sidewalk. But the cops told them to scramble, and they unhappily complied. They must have been also misled by the bird, only in their case it had to be a big bird named Roc, as seen in the Sinbad movie. It’s probably where the BBC takes all their information about the Middle East anyway. 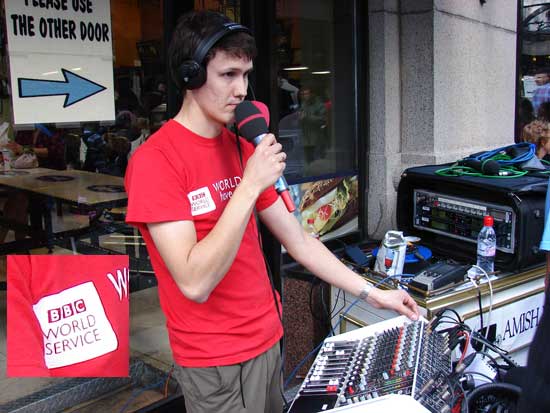 Their uniformed BBC shirts said “You set the agenda,” but among themselves they were overheard saying that “this whole mosque hysteria was caused by everyone’s stupid ignorance.” Which means that not all communities should be allowed to set the agenda, but only the most enlightened ones, like Imam Rauf and the young geniuses at the BBC.

There were also representatives of the open-minded progressive community who looked like candidates for our fall edition of the People’s Dating Service. When approached by a black lady distributing pamphlets of some obscure Christian cult, he reminded her that this was New York and her proselytizing could be offensive to some. But when I pointed out that his Che shirt and Mao hat could be offensive to others, he responded that he found my remark extremely offensive and intimidating. He was a whole head taller than me, but when I stomped my foot he ran away. 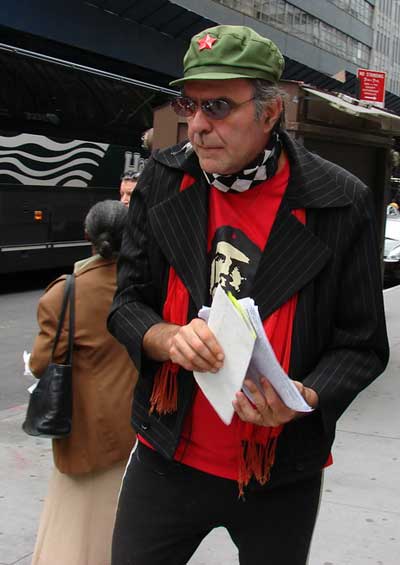 Before stomping my foot I took a picture of him next to one very appropriately titled book.

This is what the hidden mosque looks like today – the former Burlington Coat Factory at Park Place 51. It has no signs and can only be identified by the presence of two cops at the entrance, who are there apparently to protect various peaceful communities from one another. 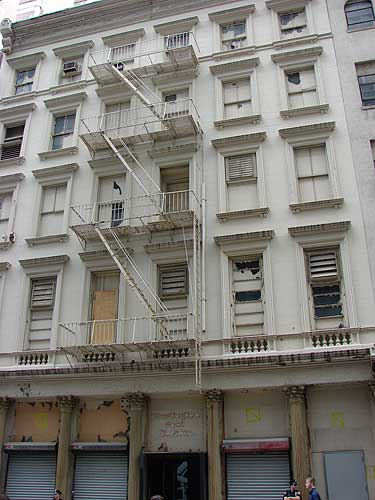 The cops tell everyone to move along – even if your name is Cindy Sheehan, the Mother-Protector of all Muslims.

They were all told to stand on the corner, where they wouldn’t obstruct the traffic. What do you know – around the corner they would all meet a guy looking very much like Imam Rauf, who is now more popular than Jesus and obviously also a progressive chick magnet.

Many workers at the site wore “No Mosque” stickers on their hard hats and shirts.