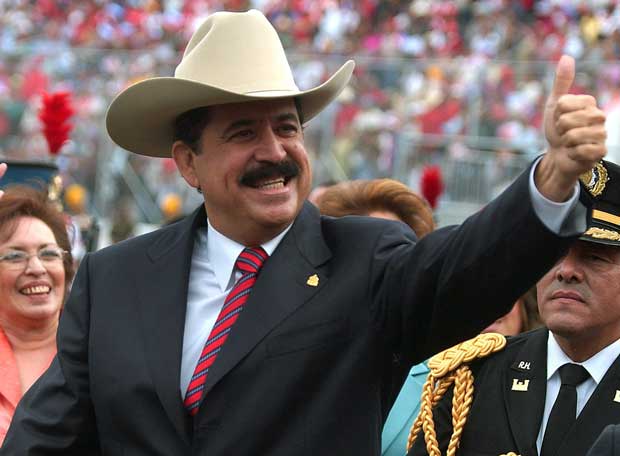 The crisis that led to President Manuel Zelaya‘s ouster underscores the importance of strengthening constitutional controls over both the military and the executive.

The Honduran Supreme Court‘s order to arrest then-president Manuel Zelaya and the military’s decision to deport him to Costa Rica in June of 2009 was a blow to international socialism.

Mr. Zelaya had been flagrantly violating constitutional law by trying to prolong his tenure. But his friends—the Castro brothers and Hugo Chávez and their acolytes—called his arrest a right-wing military coup. As the left often does when it loses a bid for power through violence, they demanded a “truth commission,” so they could trot out “witnesses” to the injustices they claimed had taken place in Honduras.

A truth commission established under the auspices of the Organization of American States (OAS) released its report earlier this month. But the zelayistas didn’t quite get the condemnation they sought. Instead, the report is a solid indictment of the former president as the provocateur of the crisis and a corrupt head of state. Given the intense international pressure to produce something that would save face for Zelaya backers, this can mean only one thing: The evidence against him was overwhelming.

This is not to say that the commission didn’t try to assign some blame to the Honduran institutions that upheld democracy in resistance to Mr. Zelaya’s attempt to stay in office indefinitely. The report was after all, “balanced,” which means it had to offer something for everyone. But the effort to force interim president Roberto Micheletti, the Supreme Court and the military to bear culpability as well is feeble and legally unsustainable.

On June 25, 2009, Manuel Zelaya, wearing a hat, helped his supporters to remove ballots from the air force base where he had stored them in preparation for an illegal referendum.

The commissioners proudly report that they produced “approximately 50,000 pages of documentation.” For the record, I did not read them all. But I did read the 52-page summary.

It finds that “the political crisis was set off” in January 2009. That’s when officials from the president’s office met with congressional members of his own Liberal Party and “threatened them with the rupture of the constitutional order if they did not choose—as supreme court justices—lawyers who were not on the list of 45 supreme court candidates” officially nominated through a legal selection process. According to the full report, Mr. Micheletti testified that U.S. Ambassador Hugo Llorens was party to this pressure on Congress to break the law.

In the year and a half before the crisis, the report finds, Mr. Zelaya had already demonstrated a propensity to abuse power. It says his actions were an “infringement” on the powers of the other branches of government. By June 2009, Mr. Zelaya had made it clear that he planned to hold a referendum to overturn the legal limits on his term in office, even though such a vote is expressly prohibited in the constitution.

Honduran institutions, the report says, “were not effective in resolving the crisis . . . not for lack of actions and resolutions taken but because the authorities’ decisions were ignored and were not acted upon by [the president] who personally took the actions required to execute the referendum.” The human-rights commission, the prosecutor, the attorney general, the electoral tribunal and the Supreme Court all took measures to try to stop Mr. Zelaya.

The crisis was “detonated” when he fired the head of the army for backing a Supreme Court decision against him, and then led a mob that broke into the air force base where he had stored referendum ballots. The report notes that a vibrant democracy requires that “no citizen, regardless of his office, is above the law. Equality before the law is an indispensable condition of democracy and the rule of law.”

The report also says that ahead of the crisis, the international community did nothing to help defend the democracy. On the contrary, the OAS decided to send a mission for the referendum, “despite the fact that every state institution with competency in the matter had issued resolutions that it was illegal and that it should not take place.”

The commission notes that it received “ample information” from the federal prosecutor on charges of corruption against the Zelaya government. But when the commission requested information supporting allegations of corruption during the Micheletti government, it was not provided, despite the fact that Mr. Micheletti’s critics had been quick to accuse him of wrongdoing.

After all this it is difficult to lay blame on Mr. Micheletti, who as the president of the congress was constitutionally the next in line for the presidency when Mr. Zelaya was arrested. But the “balanced” commission tries, calling his government “illegal.” The report also ignores the military’s right to the use of “the state of necessity,” in deporting him. International law allows such action in a grave situation where lives are at risk. Had Mr. Zelaya been detained in Honduras, where his supporters had already demonstrated their readiness to use violence, the consequences could have been deadly.

In the end, the report is not able to call the June 28 event a “coup d’état” but has to call it “a coup d’état against the executive,” which presumably means a seizure of the presidency, not the state itself. In other words, the democracy was upheld while the unlawful president was removed. For most Hondurans this should make Mr. Micheletti, the Supreme Court and the military national heroes.