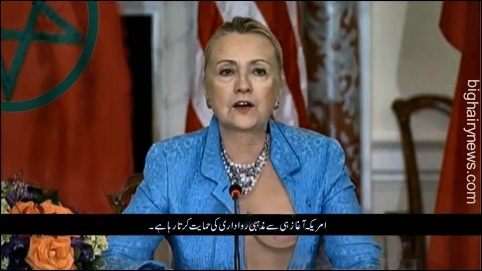 WASHINGTON (BHN) – The Obama administration scrambled Friday to repair damage done by their latest attempt to placate angry Muslims in the Middle East.

Barely 24 hours after the White House’s last failed effort to reach out to the Islamic world, Muslims are in an uproar over a video released by the State Department showing Secretary of State Hillary Clinton suffering a “Janet Jackson” style wardrobe malfunction while apologizing to Muslims.

For reasons yet unknown, the video also features a flag in the background bearing what appears to be a satanic symbol.

The White House issued an apology, and is reportedly editing the video for later release.

RUSH: Do you realize an American was arrested because of this lie?  An American citizen! I know he was arrested ostensibly on a bank fraud payroll violation, and everybody knows that’s a crock.

The death of our ambassador and three other Americans was chalked up in a UN speech and for eight days after or longer to a video that nobody ever saw. Now the State Department has essentially said: “We didn’t link the Libya attack to the video.  We didn’t do that! That wasn’t us.”  Quote: “The State Department said Tuesday it never concluded that the consulate attack in Libya stemmed from protests over an American-made video…”

So some top officials at the State Department, folks, are unwilling to fall on their swords and take the blame for the lies about the Benghazi attack.  The Administration Press, the AP, is reporting that State Department officials have briefed reporters about what really happened at the US consulate there, and they say they never linked the attack to anti-Muslim video.  By the way, the State Department had a conference call yesterday and they neglected to invite Fox News.

It was an oversight, an oversight.  Jay Carney, the White House spokeskid, has not faced the press in over a week and a half.  There hasn’t been a White House press briefing.  I’ll tell you, I’m getting the sense that the wheels are falling off.  There’s something else that’s happening.  You know, Jack Welch came out among many and said that the unemployment number last week had to be wrong. There was something wrong with it. It had to be irregular.  It wasn’t right.

And, of course, everybody jumped on his case. The regime and even some conservative commentators said, “Jack, Jack, don’t go there. There’s no conspiracy here,” and Jack Welch has doubled down.  He’s got a piece in the Wall Street Journal that says (paraphrased), “I’m damn right about this.  I’m not backing down.  There’s something highly unusual about this.”  It was noted in a piece in the American Spectator today that you don’t need Jack Welch.  You got me.

See, I Told You So: Regime Manipulates the Jobless Number Below 8% by Election Day

I predicted a year ago that this unemployment number would be reported at this time under 8%.  How did I know?  Because it’s not an economics issue; it’s all political.  It’s one of the easiest predictions I’ve ever made, that the unemployment would go down. All I had to learn was that no incumbent ever been elected, reelected with the unemployment rate over 8%. (chuckles) Well! Guess what’s gonna happen in the month leading up to the election?

The unemployment rate’s gonna be under 8%.

With this bunch in the White House, you’d be fool not to predict that.

A lot of people in the media and some left-wing bloggers are starting to scratch their heads about the inability of Obama and other members of the campaign and the regime to stop talking about how badly he did in the debate.  “Okay, you had a bad night. Forget it; move on.  Why keep talking about it?  Why keep reminding people how badly Obama did?”  Ann Althouse in Michigan has an interesting theory about this, and I’ll paraphrase her.

You keep repeating it over and over and over again because you don’t want people to realize how great Romney was.  That’s her theory, and I like it.  It’s unique. It’s great thinking. There’s another analysis out there that says that the regime has been totally preoccupied with making sure every week that they are the front-runners, that they are in the lead.  You do this for momentum, you do it for attitude, you do it for fundraising.

And the debate’s thrown all that out of whack.

The momentum is not with the regime and Obama.

They’re not perceived to be leading now in all the polling data.  Clearly the polling data is trending toward Romney now, particularly in independents, and there’s a polling group…  Let me find this.  Suffolk Polling.  Suffolk Polling has pulled out of North Carolina, Virginia, and Florida.  Romney has won those states, in their view.  They’re not even gonna waste any more time or money polling.

If you have been listening regularly to me, you know that I think there has been something big time going on out there for a long time. I talked a little bit yesterday about how I don’t believe these wild gyrations and fluctuations in the polls.  I mean, I don’t think massive numbers of Americans shift their opinions multiple times, drastically, as the polling data would indicate.  But the big story today is the State Department throwing Obama under the bus.

And, at the same time, throwing Hillary Clinton under the bus, which is a not-much-discussed aspect of this.  But I’m gonna tell you: These guys in the Obama camp can’t even… I don’t even think they can do a cover-up well.  It’s amazing how incompetent they are at a cover-up.  But this is a huge story, because you have the State Department now basically saying that Obama was lying, that Jay Carney was lying, that Hillary Clinton was lying, that Susan Rice was lying.

Anybody else from the regime who went out and tried to blame what happened to our ambassador at Benghazi and in Cairo on this video was lying, big time.  Top officials at the State Department are unwilling to fall on their swords and take the blame for the lies.  The AP, Administration Press, is reporting State Department officials have briefed reporters (all except Fox, they weren’t invited) about what really happened at the US consulate there, and they say that they never linked the attack to the anti-Muslim video.

“That was not our conclusion,” and the question about linkage is for others to answer, which, if the State Department says we had nothing to do with it, where else did this lie originate? Where else could it have originated? The White House, which is quite telling. This is a major falling out here between the radical left State Department, the radical left White House. The State Department has thrown everybody at the regime overboard and under the bus on this. This ought to be the lead story. I mentioned yesterday or the day before in a brief monologue about how I think the current acceptance of all of this economic deterioration as the new norm is directly traceable to Bill Clinton and his moral failings and our being told that we had to accept that as the new norm.

Susan Rice Plays the Fool for the Cause

I made the point here that this is bigger than Watergate. If Watergate were to happen today and it was a Democrat president, it would be tolerated. It would be applauded and praised as brilliant political strategerizing and foresight in thinking if the Democrats did it. But, folks, an American citizen is arrested, an American ambassador is dead, three other Americans are dead.

One of them, by the way, Mitt Romney — we got the audio coming up if you haven’t heard this — knew one of the SEALs killed in the Benghazi attack. He met him by accident. Romney showed up at the wrong house in his neighborhood for a holiday party. He showed up at the wrong house, they let him come in anyway, and in the process he met a SEAL, admired him greatly. It turns out he was one of the four killed in Benghazi. We have the audio coming up. You’ll hear this.

Remember that picture of the filmmaker all covered up, being dragged out of his house by sheriff’s deputies out in California, trundled off to jail. Obama at the United Nations, Obama everywhere apologizing for this citizen, apologizing for our First Amendment, apologizing for freedom of speech, blaming the death our ambassador on the video. And we all knew the first time we heard that it was a lie. We all knew the video wasn’t responsible for what happened in Benghazi. The regime said that there was a protest at the consulate and the protest got out of hand. We didn’t have the proper security to handle it and it just escalated, and it was all brought on by the video.

No, there was no protest. That’s the next thing the State Department says. There wasn’t a protest. There wasn’t anything that started innocently and got out of hand. It was a terror attack from the get-go. And the president and Susan Rice and Hillary Clinton and Jay Carney and whoever else they threw out lied for eight to ten days, maybe two weeks. I’ve put together audio montages of all of this for you to hear.

RUSH: Do you remember, the administration spent $70,000 running a television ad campaign in Pakistan featuring Hillary Clinton, featuring Obama apologizing for the video?  Obama went to the UN and apologized to the world for the video.  The producer of the video, nobody, nobody has any idea now who he is, arrested at 1:30 in the morning.  Plenty of cameras there and lights on a bank fraud parole violation.  Seventy thousand ad buy, television, we played the audio for you from that ad.  Where is Hillary Clinton?  I haven’t seen her.  Nobody died in Watergate, let alone an ambassador.  This is outrageous.  It is unreal what has happened here.  Knowingly blaming a video and insulting everybody’s intelligence in thinking that people would buy this. 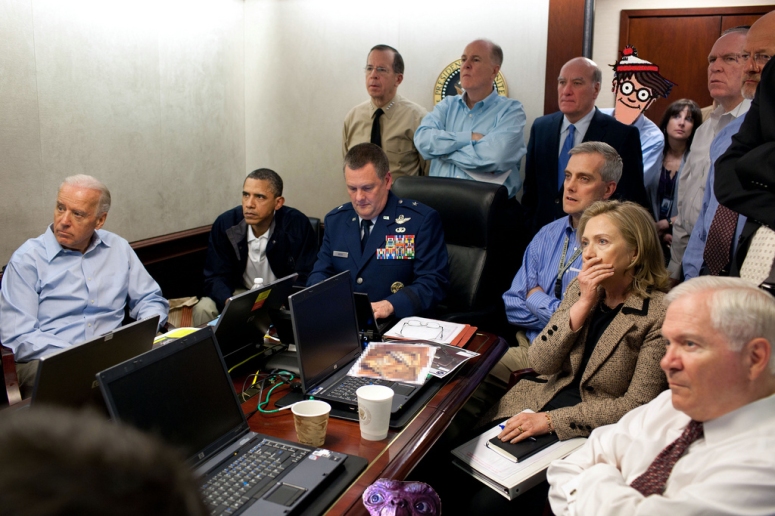 And, in the process, what was Obama actually doing?  Exonerating terrorists.  The terrorists who killed the ambassador, who attacked our embassy consulate in Benghazi, is exonerated. It wasn’t their fault. It was the video.  You know why that is?  Well, because Obama Killed Osama, and along with that he killed Al-Qaeda.  So Al-Qaeda couldn’ta done this. It had to be the video because Obama, why, he killed Al-Qaeda.  Obama’s our hero. He’s our dragon slayer. He got rid of the bad guys. There aren’t any more terrorists.  Uh-oh.  Terrorists just killed our ambassador and attacked our consulate.  Nah, nah, video did that.

From the Administration Press, the AP: “Al-Qaeda Making Comeback in Iraq, Officials Say.”  Right on schedule, Obama proudly proclaims the war in Iraq is over. We’re out of there. It was an unjust and unnecessary war.  And Al-Qaeda is making a comeback in Iraq.  Al-Qaeda is making a comeback in Egypt. Al-Qaeda and the Taliban are making comebacks in Afghanistan and Pakistan.  And the president of the United States blames the American Constitution, the First Amendment, and a guy that makes a video that was on YouTube in June.  Here’s the first of several montage sound bites about all of this.