Amid concerns that some in the mainstream media are downplaying the Libya terror attack, The New York Times’ public editor scolded The Grey Lady this week for burying its coverage of the first congressional hearing on the deadly assault.

The pointed rebuke from Margaret Sullivan

, whose job is to represent the interests of Times readers, said the hearing story “belonged on The Times’s front page.”

Instead, it was on A3 — while other major papers like The Wall Street Journal and The Washington Post put it on the cover Thursday.

“I can’t think of many journalistic subjects that are more important right now, or more deserving of aggressive reporting,” Sullivan wrote, adding that readers wrote to her “in dismay” about the apparent downplaying.

The Times’ editors explained to Sullivan that they thought the hearing was politicized, and that’s why they tucked coverage inside. Meanwhile, stories on Lance Armstrong and other topics made their way to the front page.

Executive Editor Jill Abramson, while defending the paper’s overall Libya coverage, said “congressional hearings are not all about fact-finding.”

Managing Editor Dean Baquet said: “I didn’t think there was anything significantly new in it.”

‘I can’t think of many journalistic subjects that are more important right now, or more deserving of aggressive reporting’

However, as coverage elsewhere of the hearing noted, the lengthy and combative session included testimony from former security officers who expressed deep frustration about being rebuffing in their pleas for more diplomatic protection.

State Department officials, meanwhile, did offer more information about why the administration wrongly claimed the attack was tied to a protest over an anti-Islam film.

BuzzFeed reporter Michael Hastings, who has had his run-ins with the State Department

over Libya coverage, tore into the Times and other media outlets for playing down the hearing.

He claimed the “jaw-dropping testimony”

on the Hill “completely shredded the Obama Administration’s original story about what happened in Benghazi, while offering damning evidence that the State Department ignored multiple, urgent requests for better security.”

Hastings said “this is the kind of unfolding scandal” that usually takes off in the media. But he noted the Times gave it just a “23-word tease” on its front page, and none of the network nightly newscasts on Wednesday led with the hearing.

“Certainly, it’s hard to imagine that under a Bush administration it would be treated the same. If this kind of catastrophic attack — and cover-up — had happened in 2004 or 2008, it would have likely dominated presidential debates and re-shaped election coverage,” Hastings wrote.
Fox News

Convict News Publishers For War Crimes?: We Did It At Nuremberg!!

Julius Streicher (12 February 1885 – 16 October 1946) was a prominent Nazi prior to World War II. He was the founder and publisher of Der Stürmer newspaper, which became a central element of the Nazi propaganda machine.

Is It Possible to Convict Media Personalities For War Crimes?

If there is proof that lets say any war interest such as AIPAC is funding/influencing Faux News and CNN? Aren’t people like Glenn Beck/Murdoch/etc. just as bad as people like Charles Manson or Joseph Goebbels? I believe both Charles and Joseph didn’t murder or kill anyone, but they sure influenced people to support and do it.

Putative President Barack Obama is on the brink of successfully rendering moot the very first clause of the First Amendment to the Constitution: “Congress shall make no law respecting an establishment of religion, or prohibiting the free exercise thereof”.

If he forces the Catholic Church to comply with the Health and Human Services ruling to provide its employees with insurance that covers activities the Church has long held sinful — abortion via the morning after pill, sterilization and contraceptives — then the precedent is clear: when religious beliefs conflict with government decrees, religion must yield. – Forbes 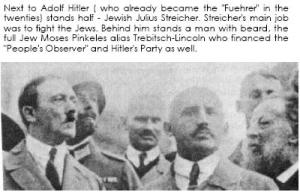 Julius Streicher’s publishing firm also released three anti-Semitic books for children, including the 1938 Der Giftpilz (“The Toadstool” or “The Poison-Mushroom”), one of the most widespread pieces of propaganda, which purported to warn about insidious dangers Jews posed by using the metaphor of an attractive yet deadly mushroom.

NAZI Germany surrendered to the Allies (May 7, 1945). Streicher like many NAZIs decided to commit suicide. He chaznged his mind, however, and married his former secretary, Adele Tappe. Only a few days later he was captured in the town of Waidring by American soldiers (May 23). Stricher was one of the most easily recognizable NAZIs. He claimed to be a painter named Joseph Sailer, but soon admited who he was. The American officer in command was Jewish, Major Henry Plitt.

After the war, he was convicted of crimes against humanity and executed.

Streicher was found guilty of crimes against humanity at Nuremberg War Crimes Trial. He was not accused of actually participating in the Holocaust. He was removed from office by the NAZIs because of a wide range of illegal activities involving using his office for personal enrichment. Thus he was out of Government when the Holocaust was perpetrated.

Accounts of Streicher’s execution vary somewhat. While climbing the stairs, he was the only one of the condemned to shout “Heil Hitler!” His last words before he was habged were “The Bolsheviks will hang you one day. Heil Hitler” (October, 16, 1946). One source claims that Just before he fell to his death, he shouted, “Purim Festival, 1946!” As the black hood was drawn over his head, a muffled voice could be heard, ‘Adele, my dear wife.’ Rge execution was bungled somewhat and Streicher sid not die immediately when the trap dropped.

There were a total of 24 men indicted. Two of them never stood trial. Robert Ley, the head of the Nazi labor movement, committed suicide before the trial began. And the court ruled that Gustav Krupp, an industrialist, was too ill to be tried.

Many other top Nazi leaders, including Hitler and Goebbels, had killed themselves in the final days of the war.

Of the 22 men actually brought to trial, 21 were present (Martin Bormann fled before he could be captured and was tried despite not being present). They were:

The International Military Tribunal finished its work and handed down its verdicts on October 1, 1946, ironically, on the Jewish Day of Atonement. Of the 22 principal defendants, 11 were given the death penalty, 3 were acquitted, 3 were given life imprisonment and four were given imprisonment ranging from 10 to 20 years.

Those sentenced to death were hanged at Spandau Prison on October 16, 1946. Those acquitted were placed in the inept denazification program following the trial. Those who received prison sentences were sent to Spandau Prison. There were originally 24 indictments but 2 of those indicted did not stand trial.

The two were Gustav Krupp (industrialist and major supplier of war armaments) who could not stand trial due to ill health, and Robert Ley (leader of the labor movement) who committed suicide prior to trial on October 25, 1945. ~ Trial Run

Those indicted who did not stand trial: