“From the Great Depression, to the stagflation of the seventies, to the burst of the dotcom bubble last year, every economic downturn suffered by the country over the last 80 years can be traced to Federal Reserve policy. The Fed has followed a consistent policy of flooding the economy with easy money, leading to a misallocation of resources and an artificial ‘boom’ followed by a recession or depression when the Fed-created bubble bursts.”

Under Obama, Fed’s Holdings of U.S. Debt Have Jumped 452%

(CNSNews.com) –  Since President Barack Obama was inaugurated in January 2009, the Federal Reserve’s holdings of U.S. government debt have quintupled, according to the Fed’s official monthly balance sheet. 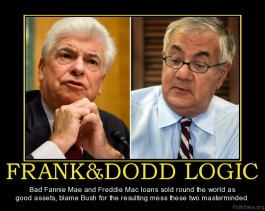 Obama and all the supporters of the resent Dodd/Frank Financial-Overhaul billonly put more Power and Control into the Hands of the Federal Reserve and want U.S. to perceive it as good for U.S.

Since 1913 these freeloaders of Society who have profited undeservedly from Our labors, have only repaid U.S. by corrupting Our government. They want complete Power and Control over U.S. and Our children.

Together, the Federal Reserve, China and Japan had increased their holdings of U.S. debt by $2.2445 trillion since Obama took office.

The $2.2445 trillion of that new publicly owned U.S. government debt that was purchased by the Fed, China and Japan equals 49 percent of all the new debt the U.S. government has sold to the public since Obama took office.

Stand Up America US

“We the People” have paid Interest on Our Own Money for almost a hundred years to The Fed to create the wealth they have used to corrupt Our own government. Our government has now become a big fat Monster! This Monster has been stealing from U.S. for a hundred years now. It’s time to drastically trim the fat. — The Fed Scam

“It is well enough that people of the nation do not understand our banking and money system, for if they did, I believe there would be a revolution before tomorrow morning.”