#1. The AIG bailout(s) was $35 BILLION…
#2. The Fannie-Mae/Freddie-Mac bailouts started around $200 BILLION – (a number roughly seconded here), according to this Bloomberg report, roughly Fannie & Freddie’s owning or guaranting nearly $SIX TRILLION dollars of mortgages.
#3. Bear Stearns: According to wiki, the government – or at least its proxy, the Fed Reserve Banks “the Federal Reserve” agreed to issue a non-recourse loan of $29 billion to JP Morgan Chase” a “non-recourse loan” which wiki continues to explain:

“This non-recourse loan means that the loan is collateralized by mortgage debt and that the government can not seize J.P. Morgan Chase’s assets if the mortgage debt collateral becomes insufficient to repay the loan.”

What is ASTOUNDING about this particular BAILOUT – $29 BILLION guarantees of TAXPYER-DOLLARS – is that the company was SOLD to JPMorgan-Chase…. for just $1.2 billion, which amounts to (a $10 per share price) which was FIVE TIMES as much as the original JPM-Chase offer for Bear-Stearns which was at (a $2/share price).

COULD ANY non-connected Joe Working-stiff in America, get 29-dollars in guarantees, plus an additional 10-dollars in cash, for something that was SO IN DEBT, that it was essentially worthless?
Let us repeat, “THE GOVERNMENT (Fed), on BEHALF OF TAXPAYERS, put itself ON THE HOOK, for TWENTY-NINE BILLION DOLLARS… for a company that sold for just $1.2 billion, and then, only after lawsuits threatened to expose an even larger can or worms!

NOTE that in RESEARCHING THESE BAILOUT FIGURES, they are HARD TO COME BY…
…you have to do a LOT of DIGGING, read through a LOT of web-pages, read through ALL KINDS of factoids, numbers, opinions (masking as “reporting”), and commentary, just to get at a number “HOW MUCH DID THE BAILOUTS cost?” !!

So anways, the above SUMMER of 2008 BAILOUT numbers (which are far, far from complete) are just a PRELUDE to TREASURY SECRETARY HANK PAULSON‘s EMERGENCY request/demand/begging of Speaker Pelosi’s 110th Congress, for… $700 BILLION in BAILOUTS.

So, that right there is nearly ONE TRILLION DOLLARS in SOCIALIZED, taxpayer BAILOUTS DOLLARS – – – that we know about!

BUT!! Those Bush-Pelosi-PAULSON bailouts ARE JUST THE TIP OF THE ICEBERG – even before President Obama was inaugurated in January 2009!

The same time Treasury Secretary Paulson was DEMANDING $700 BILLION in BAILOUTS at the FRONT DOOR of Congress,

Fed Reserve Chairman Ben Bernanke was issuing a $630 BILLION ____BACK DOOR____ bailout to the big banksters!

This Is Where Tim Geithner Comes In.

For when Ben Bernanke, as Chairman of the Fed, quietly “INJECTS” $630 BILLION into circulation, it must pass through the member banks of the Fed… on its way to commercial and investment bank vaults, where banks put that MONEY INTO CIRCULATION. 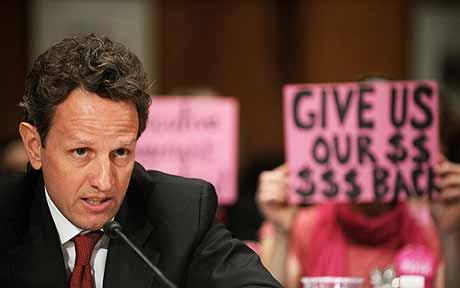 IT WAS GEITHNER’s JOB, to DISBURSE a huge portion of that fed [newly created gravy payola “money”] to the Big Banks on Wall Street –

People who thought those BIG NUMBERS and BIG PROFITS were REAL, when in fact, they were INFLATED NUMBERS, and especially INFLATED STOCK PRICES, ARTIFICIALLY INFLATED by Fed Reserve “LIQUIDITY INJECTIONS” that found their way into Chase, Citi, Goldman-Sachs, and other big bank vaults!

And while Geithner may never have been a private banker, HANK PAULSON and ROBERT RUBIN most certainly were… and LAWRENCE SUMMERS was a protege of Rubin, as is Geithner!

The Elites Responsible For Orchestrating The Destruction Of The Glass Steagall Act Of 1933:

This sea change in regulation was orchestrated by Sanford Weill and assisted by Robert Rubin, who became the second in command at Citibank after his stint at The U.S.Treasury.

Rubin, was Clinton’s Secretary of Treasury and was instrumental in getting The Gramm-Leach-Bliley Act passed. Larry Summers, was then his current Secretary Of Treasury who is now one of Obama’s economic “advisors”. What goes around comes around, they are all culpable.

Now here is our Ace-in-the-hole:

The FED had been quietly, but not so secretly, PUMPING ONE TRILLION DOLLARS into the banks, and banking system

– for at least a year LEADING UP TO the DISMAL SUMMER of 2008 and its three-quarters of a TRILLION dollars of BAILOUTS.

– BEFORE Bernanke’s “LIQUIDITY INJECTION” of 2008.

– BEFORE the spring BAILOUTS of Fannie-Mae, Freddie-Mac, AIG, Bear-Stearns, (and God only knows what other BAILOUT BILLIONS we DON’T even know about).

The Rothschild Federal Reserve had ALREADY “INJECTED” ONE TRILLION DOLLARS to PROP UP the BIG BANKS, and (thereby) to PROP UP the OVERLY INFLATED STOCK MARKET – by March of 2008!

ALMOST CERTAINLY, the STOCK MARKET HIGHS of November 2007, were ARTIFICIALLY INFLATED – SUCKING UNWARY INVESTORS IN, by using BACK-DOOR “money” “INJECTIONS” to CREATE THE ILLUSION of GROWTH and PROFITS.

This is the Definition of a PONZI SCHEME A Violation Of The RICO ACT!

– using money that APPEARS to be PROFITS, but are NOT profits

– TIM GEITHNER, BEN BERNANKE, HANK PAULSON, LAWRENCE SUMMERS, ROBERT RUBIN, CNBC, the ENTIRE CITI, GOLDMAN-SACHS, and CHASE crew were ALONG FOR THE RIDE – a PREMEDITATED ___”PUMP & DUMP” to SUCK UNWARY INVESTORS IN (the “pump” using ARTIFICIAL “liquidity injections” and the DUMP – CASHING OUT on the day of the Congressional Vote on Bailouts, in order to,

– because not only were the markets NOT making a PROFIT, they had become ADDICTED to BACK DOOR BAILOUTS, aka “LIQUIDITY INJECTIONS.”

(our tying “inflated stock prices” with “PUMP & DUMP” was due in part because Karl Denninger the [Ticker-Guy] pointing out that the markets WERE ALREADY DROPPING,