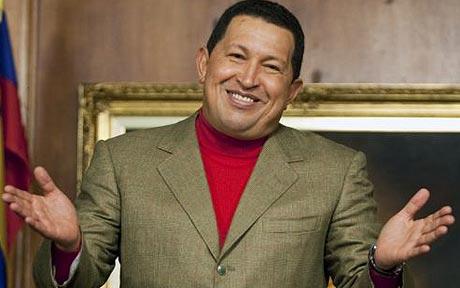 Vice President Nicolas Maduro said the Venezuelan leader died “clinging to Christ.”  The source in Venezuela told CNA that during the last weeks of his life, Chavez requested spiritual direction and asked to receive the sacraments.

I’m no Chavez fan by any stretch of the imagination and I particularly abhor those in Hollywood who saw the man as an icon of sorts.

However, if this report is true, it definitively defines the reason for the Church’s existence:

A reliable source in Venezuela has revealed to CNA that President Hugo Chavez died “in bosom of the Church” and received spiritual direction and the sacraments in his last days.

In announcing Chavez’s death to the nation on March 5, Vice President Nicolas Maduro said the Venezuelan leader died “clinging to Christ.” The source in Venezuela told CNA that during the last weeks of his life, Chavez requested spiritual direction and asked to receive the sacraments.

Ever since he assumed power in 1999, Chavez butted heads continuously with the Catholic Church over statements by the bishops warning of the risks and excesses of his Socialist agenda. In 2002, Chavez accused the Venezuelan bishops of being a “tumor” for his revolutionary goals and demanded that the Vatican not intervene in the internal affairs of the country.

In recent years, Chavez occasionally took part in the religious services of distinct denominations, but he surprised the press in April 2012 when he showed up at a Catholic church in his hometown of Barinas to attend Holy Week services. He wore a rosary around his neck and prayed for strength to fight his illness. Last July, Chavez made public his request to meet with the Catholic bishops.

After Chavez’s death, the Archdiocese of Caracas, led by Cardinal Jorge Urosa who is currently in Rome for the conclave, sent its condolences and asked that those in public office “apply the mechanisms established in the Constitution,” that public order be maintained and that “all political sectors foster peace and harmony among the people.”

Say what you will about Chavez’ life.  But no man should speak against what he did in his dying moments.