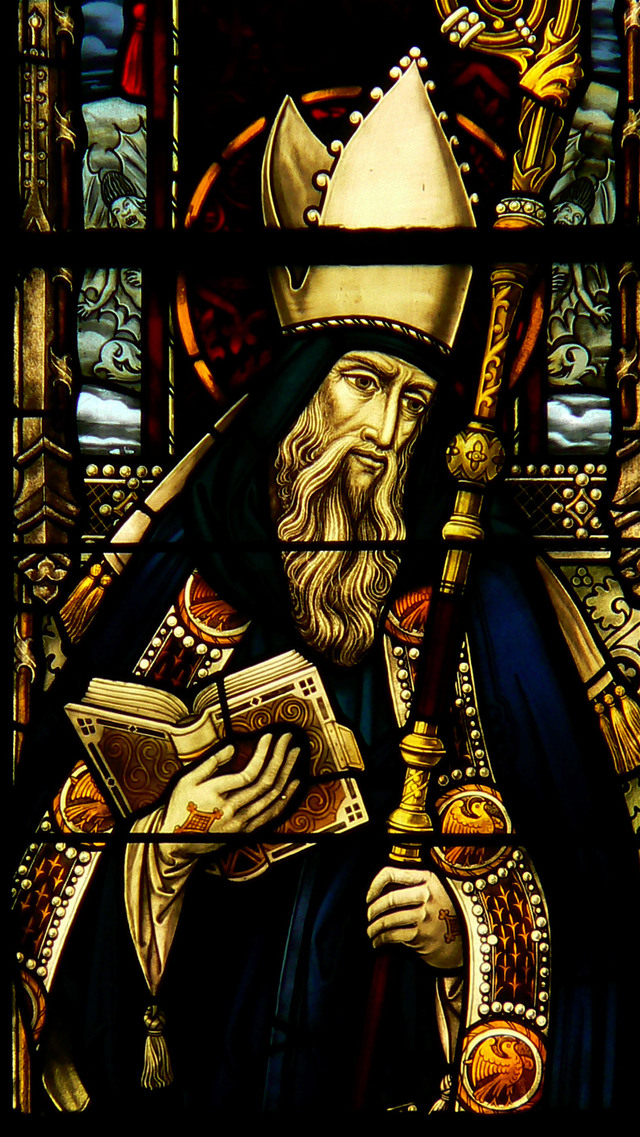 The feast day of Saint Patrick is this weekend. St. Patrick is the famous “Apostle of Ireland” who converted the entire island to Christianity. He was born at Kilpatrick, Scotland, in the year 387 and died at  Downpatrick, Ireland, 17 March, 493.

St. Patrick was the son of a deacon who was kidnapped at the age of 16 and sold as a slave. During his six-year captivity he acquired a perfect knowledge of the Celtic language, which enabled him to evangelize the Celtic people in his adulthood.

As a Providential bonus, his slave master happened to be a Druid high priest; so St. Patrick also became familiar with the details of Druidism which later enabled him to liberate the Irish people from their demonic occult influence. When the time was right, he was informed by an angel that he should flee his oppressive master and return to his native land. From there, the rest is history.

The story of how St. Patrick converted the Irish Celts is a fascinating one. His show down with the Druid occult—where God used him as an instrument to proclaim the Gospel of Jesus Christ, establishing the Christian religion all over the island— is not much different than what you’d read in the Old Testament about Elijah and the prophets of Baal or Moses and the Egyptian magicians. He was up against Satan and his minions, and he won.

Many people do not know that St. Patrick, just like his contemporary St. Augustine (354-430), wrote hisConfessions, a biography of his life.  Like Gideon and Moses, St. Patrick was very unsure of his abilities, claiming that he was not an educated or eloquent man. Yet that didn’t stop God from using him in a mighty way. Below are some excerpts from The Confession of St. Patrick, one of the greatest and most loved saints of the Church.  In his Confessions St. Patrick begins with his kidnapping the age of 16 through to God’s use of him to proclaim the Gospel. . .

9. And therefore for some time I have thought of writing, but I have hesitated until now, for truly, I feared to expose myself to the criticism of men, because I have not studied like others, who have assimilated both Law and the Holy Scriptures equally and have never changed their idiom since their infancy, but instead were always learning it increasingly, to perfection, while my idiom and language have been translated into a foreign tongue. So it is easy to prove from a sample of my writing, my ability in rhetoric and the extent of my preparation and knowledge, for as it is said, ‘wisdom shall be recognized in speech, and in understanding, and in knowledge and in the learning of truth.’

10. But why make excuses close to the truth, especially when now I am presuming to try to grasp in my old age what I did not gain in my youth because my sins prevented me from making what I had read my own? But who will believe me, even though I should say it again? A young man, almost a beardless boy, I was taken captive before I knew what I should desire and what I should shun. So, consequently, today I feel ashamed and I am mightily afraid to expose my ignorance, because, [not] eloquent, with a small vocabulary, I am unable to explain as the spirit is eager to do and as the soul and the mind indicate.

11. But had it been given to me as to others, in gratitude I should not have kept silent, and if it should appear that I put myself before others, with my ignorance and my slower speech, in truth, it is written: ‘The tongue of the stammerers shall speak rapidly and distinctly.’ How much harder must we try to attain it, we of whom it is said: ‘You are an epistle of Christ in greeting to the ends of the earth . . . written on your hearts, not with ink but with the Spirit of the living God.’ And again, the Spirit witnessed that the rustic life was created by the Most High.

12. I am, then, first of all, countrified, an exile, evidently unlearned, one who is not able to see into the future, but I know for certain, that before I was humbled I was like a stone lying in deep mire, and he that is mighty came and in his mercy raised me up and, indeed, lifted me high up and placed me on top of the wall. And from there I ought to shout out in gratitude to the Lord for his great favours in this world and for ever, that the mind of man cannot measure.

34. Thus I give untiring thanks to God who kept me faithful in the day of my temptation, so that today I may confidently offer my soul as a living sacrifice for Christ my Lord; who am I, Lord? or, rather, what is my calling? that you appeared to me in so great a divine quality, so that today among the barbarians I might constantly exalt and magnify your name in whatever place I should be, and not only in good fortune, but even in affliction?

So that whatever befalls me, be it good or bad, I should accept it equally, and give thanks always to God who revealed to me that I might trust in him, implicitly and forever, and who will encourage me so that, ignorant, and in the last days, I may dare to undertake so devout and so wonderful a work; so that I might imitate one of those whom, once, long ago, the Lord already pre-ordained to be heralds of his Gospel to witness to all peoples to the ends of the earth.

So are we seeing, and so it is fulfilled; behold, we are witnesses because the Gospel has been preached as far as the places beyond which no man lives.

41. So, how is it that in Ireland, where they never had any knowledge of God but, always, until now, cherished idols and unclean things, they are lately become a people of the Lord, and are called children of God; the sons of the Irish [Scotti] and the daughters of the chieftains are to be seen as monks and virgins of Christ.

St. Patrick is truly a saint for our modern times; his fearless evangelization is a model for us all as we witness the need in many areas of the world to have Christ’s Gospel proclaimed anew. St. Patrick, pray for us!