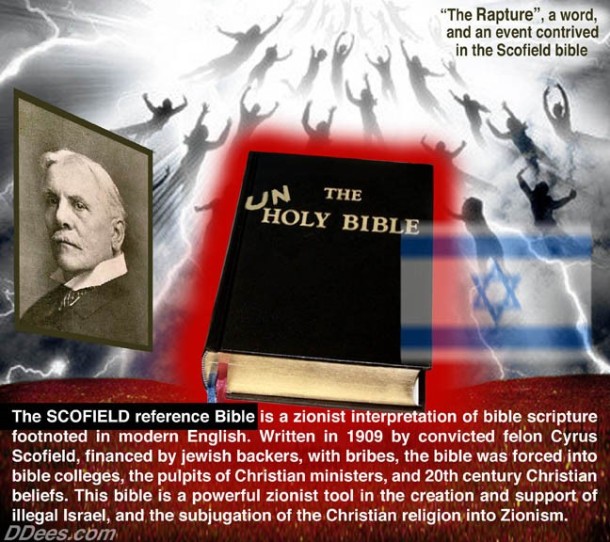 Cyrus Scofield, a forger, felon and trained lawyer, had been hired by the Rothschilds to write this dispensational reinterpretation of biblical events and Christian doctrine.”

Jonas E. Alexis studied mathematics and philosophy as an undergraduate at Palm Beach Atlantic University, and has a master’s degree in education from Grand Canyon University.

Merlin L. Miller is an independent film director, writer, and producer. He was the 2012 presidential candidate for the American third position party. He graduated from the United States Military Academy at West Point and served in the U.S. Army where he commanded two units.

“My personal awakening and quest for truth began when I learned about the attack by Israel on the American spy ship, USS Liberty, while marketing the Western picture, ‘Jericho,’ in 2001-2002.

“I met Bob Scarborough, an independent cinema chain (Carmike) booking agent, and surviving Liberty crewman, who introduced me to their story. Strangely, as a military academy graduate, I had never heard of it, and therefore did not initially believe him. He directed me to Dick Thompson, which began a special friendship and my descent down the rabbit hole.”

What did you find in the rabbit hole?

Miller: What I found was a seemingly never ending maze of parallel and intersecting tunnels…where truth had been totally subverted and a false reality constructed. It wasn’t just a case of nuanced perspectives, but of outright lies and manipulations of fact.

My initial focus was researching the attack on the USS LIBERTY, but there was dearth of accurate and complete information from the mainstream media, and it became increasingly clear that truths were not to be found there.

Personal accounts from the survivors, and others in government and the military, with analyses by independent writers and researchers, finally put things into perspective – revealing a sinister and massive government/media cover-up with the subsequent hijacking of American foreign policy for Zionist interests.

I eventually wrote the screenplay, “FALSE FLAG,” a romantic thriller, which combines contemporary intrigues with the USS LIBERTY story. The protagonist actually goes down similar rabbit holes in pursuit of truths and must ultimately take action to prevent the “War on Terror” from becoming WWIII through a new false flag event. The screenplay can be read at http://merlinmiller.com/false-flag/

“organized the first Zionist lobbying effort in 1891. He recruited J. P. Morgan, John D. Rockefeller, Charles B. Scribner and other financiers to underwrite a massive newspaper campaign for establishing a Jewish “state” in Palestine.

“Today, the preachings of misguided but media-supported evangelical Christian Zionists have convinced the Christian community to support this campaign, and associated warring—which is totally at odds with the Prince of Peace.

“This largely came about after publication of Scofield’s Reference Bible. Cyrus Scofield, a forger, felon and trained lawyer, had been hired by the Rothschilds to write this dispensational reinterpretation of biblical events and Christian doctrine.” Can you expand on this?

Miller: The writing and promotion of “Scofield’s Reference Bible” was a massive effort to subvert true Christianity to serve Zionist/NWO interests, instead. Through subtle but false reinterpretations of the Bible, the evangelical Christian community has come to unquestionably support the Israeli “state” and perpetual war in the Middle-East, rather than the teachings of Jesus, the Prince of Peace.

Throughout the 20th Century and with incredible support from the Rothchild controlled Oxford Press, various editions of Scofield’s Bible would actually create a new religion, Christian Zionism (Judeo-Christianity), altering words and meanings through deceptive footnotes.

Chuck Carlson has produced a powerful 30 minute video, “Christian Zionism, the Tragedy and the Turning”, which explains this orchestrated deception and can be seen at his website “We Hold These Truths” (whtt.org) or on Youtube. [Political Vel Craft]

Others, who are working to reveal this subterfuge, include Texe Marrs (powerofprophecy.com), E. Michael Jones (culturewars.com), and perhaps the ultimate is your masterful work, Jonas, “Christianity and Rabbinic Judaism”.

What Is A Christian Zionist

JERUSALEM (Catholic Online) – Christian Zionism is a false and extreme theological and political philosophy that is has become a corrupting influence in the politics of Israel and the United States, said a Catholic patriarch and three other religious leaders here, urging Christians churches to break their silence. 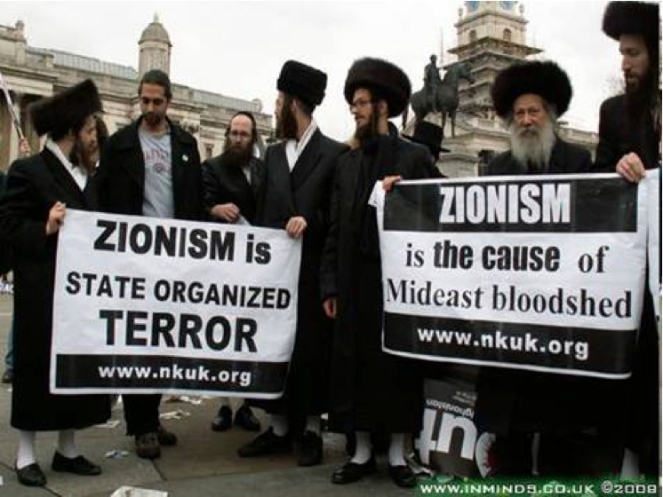 The statement, “The Jerusalem Declaration on Christian Zionism,” released by Aug. 22, was signed by Catholic Latin-rite Patriarch Michel Sabbah of Jerusalem and other leaders of Christian churches in Jerusalem, Archbishop Swerios Malki Mourad of the Syrian Orthodox Patriarchate in Jerusalem, Bishop Riah Abu El-Assal of the Episcopal Church of Jerusalem and the Middle East and Bishop Munib Younan of the Evangelical Lutheran Church in Jordan and the Holy Land.

“Christian Zionism is a modern theological and political movement that embraces the most extreme ideological positions of Zionism, thereby becoming detrimental to a just peace within Palestine and Israel,”

Christian Zionism, the statement said, is an ideology that views the gospel through the prism of “empire, colonialism and militarism identifies,” emphasizing in its extreme form “apocalyptic events leading to the end of history rather than living Christ’s love and justice today.”

”We categorically reject Christian Zionist doctrines as false teaching that corrupts the biblical message of love, justice and reconciliation,”

The Holy Land leaders condemned the influence that Christian Zionism is having in American and Israeli policies concerning the Palestinian Territories. The leaders

“reject the contemporary alliance of Christian Zionist leaders and organizations with elements in the governments of Israel and the United States that are presently imposing their unilateral preemptive borders and domination over Palestine.”

Christian Zionism, they said, “facilitate and support” policies that “advance racial exclusivity and perpetual war rather than the gospel of universal love, redemption and reconciliation taught by Jesus Christ.” They added that such policies undermine the security of the “Middle East and the rest of the world.”

“We call upon all people to reject the narrow world view of Christian Zionism and other ideologies that privilege one people at the expense of others,”

“that Christian Zionism and its alliances are justifying colonization, apartheid and empire-building.”

“We are fast approaching the stage of the ultimate inversion: the stage where the government is free to do anything it pleases, while the citizens may act only by permission; which is the stage of the darkest periods of human history, the stage of rule by brute force.” Hegemony

The Holy Land leaders urged the world’s Christian churches to pray for the Palestinian and Israeli people, both “victims of occupation and militarism” where Palestine’s “impoverished ghettos surrounded by exclusive Israeli settlements.” “Rather than condemn the world to the doom of Armageddon,” the heads of Jerusalem faith communities called “upon everyone to liberate themselves from the ideologies of militarism and occupation.

[The leader of Zionism is The Rothschild Cartel of which they are Banking Khazars none Judaic. Christian Zionism comes into play when we partake in their deception ‘most unknowingly’ in justifying colonization, apartheid and empire-building for The New World Order of international banking totalitarianism aka; World Banking Control over the volition of Mankind.

The issue is to silence TRUTH pure and simple.

[1913 Jacob Schiff sets up Rothschild’s ADL [Anti Defamation League] In The U.S. To Reinforce The Idea The Americans Should Not Be Anti-Semetic. Rothschild Mafia’s Motives Were To Hide Behind The Name Jew In The U.S.

Coincidentally In The Same Year 1913, The Rothschild Federal Reserve Is Surreptitiously Forced Upon America.]

Instead, let them pursue the healing of the nations!” They said that the establishment of “illegal” settlements and the construction of a wall in the “confiscated” Palestinian Territories “undermine the viability of a Palestinian state as well as peace and security in the entire region.”

Christian churches that have remained silent must “break their silence and speak for reconciliation with justice in the Holy Land,” the four said. They committed themselves to non-violent resistance to end the Israeli occupation, affirmed that Israelis and Palestinians can live together in “peace, justice and security,” and rejected “all attempts to subvert and fragment” the oneness and unity of Muslim and Christian Palestinians.

“All people are created in the image of God,” they said, and “called to honor the dignity of every human being and to respect their inalienable rights.” “God demands that justice be done,” the four religious leaders said. “No enduring peace, security or reconciliation is possible without the foundation of justice.

The demands of justice will not disappear. The struggle for justice must be pursued diligently and persistently but without violence.” “This is where we take our stand,” they said.

“We stand for justice. We can do no other.”

“Justice alone guarantees a peace that will lead to reconciliation with a life of security and prosperity for all the peoples of our land,” the Christian leaders stated.

“By standing on the side of justice, we open ourselves to the work of peace – and working for peace makes us children of God.”

A Knock At Midnight