Russia’s Defense Ministry has released a video of airstrikes against positions of US Israeli proxy terrorists in the Syrian province of Idlib.

This video shows elimination of the terrorists’ armored vehicles, car bomb services and underground base in the Idlib province, where a total of 10 airstrikes have been launched by Russian warplanes in the past 24 hours.

MOSCOW, September 26. /TASS/. Aircraft of the Russian Air Force task group in Syria carried out 10 attacks over the past 24 hours on terrorist facilities in the Syrian northwestern province of Idlib with all targets located far from residential areas, Defense Ministry spokesman Major General Igor Konashenkov said on Tuesday.

“Following the additional reconnaissance, carried out by unmanned aerial vehicles, and in line with verified information received via other sources, the aircraft of the Russian Air Force task group delivered 10 strikes against terrorist facilities in the province of Idlib,” Konashenkov said.

“The facilities were located far from residential areas and included underground bases of militants, field arms depots, military hardware, multiple artillery rocket systems and workshops for equipping cars with explosives,” he said. “Data is available regarding all of the delivered airstrikes.”

The military official also said that all eliminated facilities and military hardware were either prepared or involved in September 18 attack on Russian military police officers in the province of Hama.

The high-ranking military official denied information provided by the UK-based ‘The Syrian Observatory for Human Rights’ (SOHR) that Russian aircraft allegedly bombed residential areas in Idlib and slammed the reports of the organization as ungrounded.

“The Russian Air Force task group in Syria never targeted residential areas,” Konashenkov said. “Statements made by the ‘Observatory’ citing either anonymous witnesses or volunteers are traditionally ungrounded and serve as a ‘media cover-up’ for militants of Jabhat al-Nusra (outlawed in Russia) and its allied groupings.”. 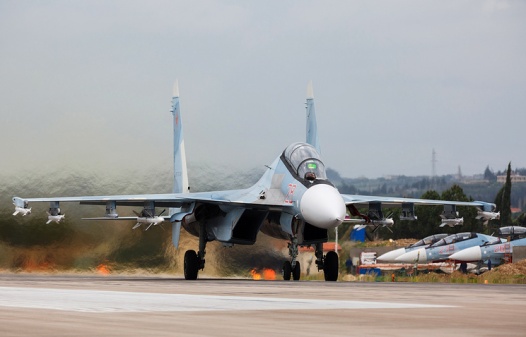