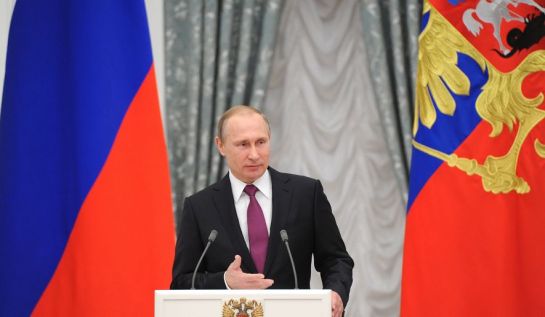 President Putin Of The Russian Federation

Russia has warned the United States that its troops will fire at U.S. Special Forces in Syria if they see evidence of collusion with ISIS.

Moscow issued the warning Thursday, claiming that its forces had come under fire from U.S.-backed Syrian Democratic Forces (SDF) who seemed to be protecting ISIS.

Newsweek.com reports: Russia’s Ministry of Defense said mortars had been fired at its own special forces from positions held by U.S. troops and the SDF on the eastern banks of the Euphrates.

“A representative of the U.S. military command in [the U.S. operations center in Qatar] was told in no uncertain terms that any attempts to open fire from areas where SDF fighters are located would be quickly shut down,” Defense Ministry Spokesman Igor Konashenkov said in a statement reported by Russian state news agency Tass.

“Fire points in those areas will be immediately suppressed with all military means,” the statement added.

The meeting of the Russian and U.S.-backed offensives near Deir Ezzor has escalated tensions between the two sides in eastern Syria. Russia backs the Syrian government of Bashar al-Assad, while the U.S. has backed the [Israeli/US deep state proxy SDF aka ISIS], a coalition of mostly Kurdish paramilitary brigades [Not Kurdish but ISIS mercs] , in its own fight against ISIS in the area [pure bull ~ this is their propaganda].

This Is What Deep State Of Israel/ US are fighting For

[This Is Rothschild’s Present Day Resurrection Plan To Control The Middle East Oil Hub. The Banking Cabal Uses A False Biblical Narrative Of A Promised Land That Needs To Be Returned To The Old Testament Jew. The Promised Land Was Fulfilled And Ceased To Be After 70 A.D.]

The [Israeli/US deep state proxy ISIS] SDF said on Saturday that it had come under attack from Syrian Army troops supported by Russian aircraft. Russia has denied being involved in any such action. The U.S.-backed militia warned Monday that any further attempts to advance on the eastern Euphrates would be met with retaliation.

Russia’s Defense Ministry has suggested [Israeli/US deep state proxy ISIS]  SDF-held dams further up the Euphrates have been deliberately opened to impede the Syrian Army’s advances and has questioned whether any fighting is taken place between the majority Kurdish force and ISIS. [Majority Kurdish Forces Are Anti US/Israel]

According to the spokesman quoted by Tass, 85 percent of Deir-Ezzor is now under regime control, adding that it expects the city to be liberated from ISIS forces within a week.

The Russian Ministry of Defense also praised the effectiveness of the Syrian army’s advance while criticizing the U.S.-backed offensive in Raqqa, which it said had stalled.

The SDF has said, contradicting Russian statements, that it is in the final stages of its assault to liberate Raqqa and now holds 80 per cent of the the territory in the city.

A media official for the paramilitary group told Reuters between 700 to 1,000 ISIS fighters remained in the city.

Russia’s intervention in Syria in September 2015 on the side of the beleaguered regime of Bashar al-Assad changed the fortunes of the government in Damascus, which, at the time, was on the verge of defeat by rebel forces.

The U.S. intervened directly against Assad following the [discredited] Syrian military’s chemical weapons attack on the town of Khan Sheikhoun in the country’s north western Idlib province in April this year.

The Russian Defense Ministry released an aerial footage of ISIS positions north of Syria’s city of Deir ez-Zor that showed the US equipment deployed in the area.

The photos posted on Russia’s Defense Ministry’s Facebook page on Sunday show equipment that is used by the US special forces.

“The aerial photographs, taken on September 8-12, 2017 in the areas of Daesh troops’ deployment, detected a big number of US Hummer armored vehicles, used by the US Army’s special forces,” the ministry wrote on Facebook.

The Defense ministry added that the footage clearly showed that the units of US Army’s special forces were deployed in the footholds previously set up by [US /ISrael ISIS terrorists]. However, no signs of ongoing clashes with terrorists, as well as shell craters left after the coalition’s airstrikes were seen.

“Despite the strongholds of the US armed forces being located where [US Israeli ISIS terrorists] are currently deployed, there are not even signs of the organization of a battle outpost. This shows that all the US servicemen who are currently there, feel completely safe in the areas under the terrorists control,” the ministry outlined.

In early September, the Syrian government troops, backed by Russian airstrikes, broke a three-year ISIS blockade to the west and south of Deir ez-Zor. On Monday, the Syrian Army crossed the Euphrates River with the support of the Russian Aerospace Forces near Deir ez-Zor, knocking [US /ISrael ISIS terrorists] out from a number of settlements, and are currently developing an offensive eastward.