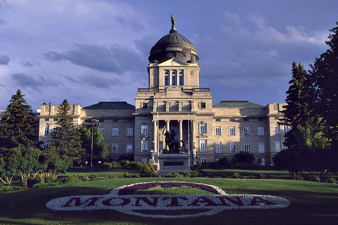 Lawmakers in Montana contend courts should decide whether Congress has overstepped its authority in a dispute over a state exemption from federal regulations for guns made and sold in the state.

“Should Congress enact a law that appears to conflict with the guidance in the [Montana Firearms Freedom Act], the courts may then determine whether Congress has acted within the scope of its delegated powers as limited by later amendments,” an amicus brief on behalf of Montana legislators, said. “The courts may then determine the extent to which Congress’s enactment has abrogated the state’s execise of power within the same sphere.”

The brief was filed just days ago in a lawsuit that was brought against U.S. Attorney General Eric Holder by the Second Amendment Foundation and the Montana Shooting Sports Association in U.S. District Court in Missoula, Mont.

It seeks a declaration that the federal government must stay out of the way of Montana’s management of its own firearms.

While Montana was the first state to adopt such legislation, six other states already have followed suit. South Dakota, Wyoming, Tennessee, Utah, Idaho and Arizona also now have Firearms Freedoms Acts on their books, and Alaska has plans awaiting the governor’s signature to become law.
Gary Marbut, chief of the Montana Shooting Sports Association, said another two dozen states also are in various stages of considering such plans.

All the information you’ll ever need about guns, ammo and a special video on how to make them, found in the “Firearms Multimedia Guide.”

The brief, submitted by Bozeman, Mont., attorney Jennifer Bordy and Jeffrey Renz of the University of Montana School of Law on behalf of state legislators in Montana, said the law is a “truism.”

“It is the Montana legislature’s expression that the mere fact that a manufactured good is a firearm or a firearm accessory does not automatically subject it to federal regulation.”

The arguments are based on the Commerce Clause as well as the Second, Ninth and Tenth Amendments to the U.S. Constitution.

“The law … is intended to allow Montana citizens to engage within their state in constitutionally protected activity without burdensome federal oversight and regulation for their solely intrastate activities,” the brief argues.

“It is questionable whether Congress’s authority under its conditional spending power or its power to regulate interstate commerce extends to MFFA firearms,” the argument continues.

It cited a 1939 Supreme Court ruling that states “are as independent of the general government as that government is of the states.”

“Where a power had not been granted exclusively to the national government or, where generally granted, had not been exercised … the states retain freedom to legislate,” it argues.

“Of course the power to tax is the power to destroy… and it is without question that should the U.S. Congress wish to tax firearms, whether they are in the stream of commerce or not, it is free to do so…. Nevertheless the power to tax for revenue … is different from the power to regulate by means of a duty, excise, or impost.”

“There is nothing in the MFFA that should offend the powers of the national government,” it said.

It also explains that, “Constitutional rights are enshrined with the scope they were understood to have when the people adopted them, whether or not future legislatures or (yes) even future judges think that scope too broad.”

The federal supremacy clause, therefore, has no impact “because only laws made in pursuance of the Constitution constitute the supreme law of the land.”

“To the extent that Congress has usurped states Ninth and Tenth Amendment powers with the federal courts’ blessing, the issue should be revisited in a case just such as this – where a state legislature has passed a specific limited exercise of its reserved powers to protect and strengthen the rights of citizens,” it said.

Montana’s plan is called “An Act exempting from federal regulation under the Commerce Clause of the Constitution of the United States a firearm, a firearm accessory, or ammunition manufactured and retained in Montana.”

The law cites the 10th Amendment to the U.S. Constitution that guarantees to the states and their people all powers not granted to the federal government elsewhere in the Constitution and reserves to the state and people of Montana certain powers as they were understood at the time it was admitted to statehood in 1889.

The lead attorney for the plaintiffs’ litigation team is Quentin Rhodes of the Missoula firm of Sullivan, Tabaracci & Rhoades, PC. The team includes other attorneys working in Montana, New York, Florida, Arizona and Washington.

The federal government has threatened gun dealers with penalties if they fail to follow the federal regulations for intrastate gun deals. And it has demanded that the Montana lawsuit be dismissed, explaining it has the authority to regulate intrastate commerce.

According to the Firearms Freedom Act website, such laws are “primarily a Tenth Amendment challenge to the powers of Congress under the ‘commerce clause,’ with firearms as the object – it is a state’s rights exercise.”

When South Dakota’s law was signed by Gov. Mike Rounds, a commentator said it addresses the “rights of states which have been carelessly trampled by the federal government for decades.”

Michael Boldin of the Tenth Amendment Center said Washington likely is looking for a way out of the dispute.

“I think they’re going to let it ride, hoping some judge throws out the case,” he told WND earlier. “When they really start paying attention is when people actually start following the [state] firearms laws.”

WND reported earlier when Wyoming joined the states with self-declared exemptions from federal gun regulation. Officials there took the unusual step of including penalties for any agent of the U.S. who “enforces or attempts to enforce” federal gun rules on a “personal firearm.”

The costs could be up to two years in prison and $2,000 in fines for an offender.