An American patriot and silversmith, Paul Revere was born in Boston, Jan. 1, 1735, and died May 10, 1818. Revere became a legendary hero at the start of the American Revolution, when he rode from Charlestown to Lexington, Mass., on the night of Apr. 18, 1775, to warn the countryside of approaching British troops.

An official courier for the Massachusetts Committee of Correspondence, Revere arrived in Lexington shortly before another rider, William Dawes, and warned John Hancock and Samuel Adams to escape. Revere then started for Concord accompanied by Dawes and Samuel Prescott but was halted by a British patrol.  Only Prescott reached Concord.  Revere’s exploit was celebrated in Henry Wadsworth Longfellow’s famous (but generally inaccurate) poem, “Paul Revere’s Ride” (1863).

In the above portrait, Paul Revere holds an unfinished silver teapot painted by John Singleton Copleyaround 1765.  The energetic, colorful Revere organized a network of more than 60 fellow artisans that formed the secret heart of Boston’s Revolutionary movement.

His father, Apollos Rivoire (or De Rivoire), was a Huguenot who had gone to Boston while still a boy as a refugee from religious persecution in France. Apprenticed to the silversmith John Coney, Apollos had married Deborah Hitchbourn (Hitchborn), and he gradually Anglicized his name as Paul Revere. As an independent silversmith, the elder Revere had become a man of substance by the time his son Paul was born, in Boston, Mass., on Jan. 1, 1735.

Young Paul learned the trade of silversmith in his father’s shop, and probably attended the North Writing (or Grammar) School while serving his apprenticeship. In 1756 he enlisted for the unsuccessful expedition against the French post at Crown Point, serving as second lieutenant. A few months after his return, in the summer of 1757, he married Sarah (“Sary”) Orne, by whom he was to have eight children. 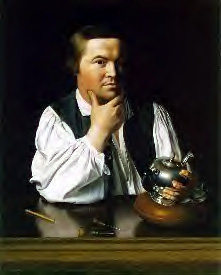 Revere is remembered as much as a craftsman as he is as a patriot. His anti-British engravings of episodes such as the Boston Massacre were effective propaganda. He cast musket balls and cannon during the war and designed and printed the first Continental currency. After the war he became one of New England’s leading silversmiths and a pioneer in the production of copper plating in America.

When tension developed between the colonies and the mother country after the end of the Seven Years’ War (1756–1763), Paul Revere emerged as one of the leaders of the group of artisans who identified themselves with the critics of the policies of the mother country. As a Mason he had already come to be associated with James Otis, Joseph Warren, and other libertarians. He now became a member of various Whig groups, organized and unorganized, such as the Sons of Liberty, the North End Caucus, and the Long Room Club. He was probably a witness of, although not certainly a participant in, the Stamp Actriots and the looting of Gov. Thomas Hutchinson‘s house.

Meanwhile, although his fame as a silversmith steadily mounted, business fell off for several years, and Revere turned to other trades to supplement his income. He did copper engraving, although his skill as a draftsman was woefully inadequate, drew political cartoons for the Whig polemicists, published music, and even went in for dentistry, a craft that he soon dropped. He was not only one of the most versatile and outstanding artisans of Boston; he was also an active political leader.

He observed the coming of the customs commissioners and the British troops to Boston in 1768, and published a series of engravings that commemorated the latter event. When the so-called Boston Massacre took place in 1770, he published a famous drawing of the scene that doubtless aroused as much resentment against the British troops as the event itself.

In the years between 1770 and 1773, Revere became an express (mounted messenger) for the Whig patriots of Boston. At the time of the arrival of the tea ships in the autumn of 1773, he rode out to warn the committees of correspondence of the other ports along the coast not to permit the ships to land their cargoes. A little later, after he himself had been one of the “Indians” in the Boston Tea Party, he rode to Pennsylvania for the Boston committee to carry the news of the party to the committees of New York and Philadelphia.

It was in the spring of 1775 that Revere made the famous ride described by Henry Wadsworth Longfellow that placed him among the immortals of the American national tradition. Gen. Thomas Gage, the British military governor of Massachusetts, had decided to arrest John Hancockand Samuel Adams, who were at Lexington, and to confiscate the military supplies stored by the Whigs at Concord.

On Sunday, April 16, four days before the projected Gage expedition, Revere rode out to Lexington to warn Hancock and Adams, and sent word to the Whigs at Concord to hide the stores. At this time he arranged to signal the patriots by showing two lanterns in Boston’s North Church steeple if the British moved by sea or one if by land.

On the night of Tuesday, April 18, Revere and William Dawes rode out, Dawes by way of Boston Neck and Revere by way of Charlestown, to alert the countryside that the British troops would move the next morning. Revere arrived in Lexington about half an hour before Dawes, and Hancock and Adams fled to Woburn. Revere, Dawes, and Dr. Samuel Prescott started for Concord, but Dawes and Revere were stopped by a British patrol; Prescott got through. Revere was released by the British and returned to Lexington to help in saving John Hancock’s trunk and papers.

During the first years of the war, Revere served as a messenger for the Committee of Safety, with headquarters at Cambridge. He was then commissioned by the Provincial Congress to manufacture gunpowder. He also designed and printed the first issue of Continental money, and made the first official seal for the colonies and the state seal for Massachusetts. After the reoccupation of Boston in 1776, he again took up his old trade. He reached the rank of lieutenant colonel and was placed in command of Castle William (Castle Island) in Boston Harbor. Meanwhile he had begun to cast cannon for the American Army.

“Sary” Revere died on May 3, 1773, and Revere married Rachel Walker on October 10. They had eight children. After the war he went into merchandising and, later, bell casting, but silversmithing, with the assistance of his son, continued to be his most dependable and rewarding business. Presently, at the age of 65, he learned how to roll sheet copper and furnished the new sheeting for the dome of the Massachusetts State House and other public buildings, as well as for the hulls of ships in the youngAmerican Navy, including the Constitution, for which he had earlier furnished bolts, spikes, braces, and other fittings.

Paul Revere’s outstanding characteristic was the versatility of his craftsmanship; his reputation as an artist in the working of silver is hardly less great or enduring than his fame as a patriot. For him, that famous ride to Lexington was hardly more than an exciting incident that was, in fact, shared by William Dawes. Because of its dramatic nature, however, it is for the ride that he is most popularly remembered by succeeding generations.