Senator Ted Stevens Was Killed In A Plane Accident August 10, 2010

U.S. District Judge Emmet Sullivan, dismissed the corruption conviction of former Alaska Sen. Ted Stevens on Tuesday and took the rare and serious step of opening a criminal investigation into prosecutors who mishandled the case.

“In nearly 25 years on the bench, I’ve never seen anything approaching the mishandling and misconduct that I’ve seen in this case,” U.S. District Judge Emmet Sullivan said.

Sullivan appointed a special prosecutor to investigate Justice Department lawyers who repeatedly mishandled witnesses and withheld evidence from defense attorneys during the month long trial. Stevens was convicted in October of lying on Senate forms about home renovations and gifts he received from wealthy friends. Stevens case was summarily closed and a case against the corrupt prosecutors was opened.

With the prosecution team now under the scrutiny Senator Ted Stevens smiled and posed for pictures with his family on the courthouse steps.

“I’m going to enjoy this wonderful day,” he said. To all of the hate-filled lefties who used this false prosecution to crow about “Republican corruption”: Anathema! The Dems got their Senate seat by fraud and are now going to pay a steep price for their corrupt practices.

A Justice Department lawyer under investigation for criminal activity in the prosecution of former senator Ted Stevens of Alaska committed suicide September 27, 2010 over the weekend, the law firm representing him confirmed.

Nicholas A. Marsh, 37, was one of several Justice lawyers under investigation by a special prosecutor for criminal activity that last year led a judge to vacate Stevens’s conviction in a corruption case. A spokeswoman for Marsh’s lawyer, Robert Luskin, confirmed Monday that Marsh had killed himself, but offered no further details. 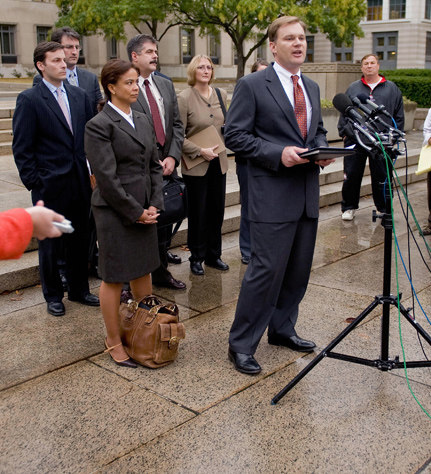 Two of the best known such prosecutions took place in the Deep South–the Don Siegelman case in Alabama and the Paul Minor case in Mississippi. Our research indicates that Marsh did not take part in either the Siegelman or Minor cases. But he was part of the U.S. Public Integrity Section, which was heavily involved in both cases.

Reporting on Marsh’s death has been curious, to say the least. He apparently died over the weekend, but the story broke today. NPR, TPM Muckraker, The Washington Post, and mainjustice.com all are calling it a suicide. But we have yet to see a quote from anyone in law enforcement, anyone with a background as a medical examiner, confirm that Marsh killed himself.

Where is the suicide angle coming from? Why, from the office of Robert Luskin, who happens to be Karl Rove’s lawyer.

The criminal investigation still remains active. The special prosecutor, a former military judge, is investigating the six prosecutors in the case for criminal contempt and obstruction of justice.

The prosecution of Stevens unraveled when it was discovered that the prosecutors had withheld critical evidence and were accused of allowing false or misleading evidence to be presented to the Court. This includes withholding an interview with key witness Bill Allen that contained exculpatory evidence. The Justice Department filed a motion to set aside the conviction and sentence of Stevens on April 1, 2009. The prosecutorial team was held in contempt by the Court for their misconduct.

← United Nations Told To Stay The Hell Out Of Economic Issues!
The Wall Street Journal, A Conspiracy So Vast!: George Soros may be a nut case, but he’s still dangerous. →