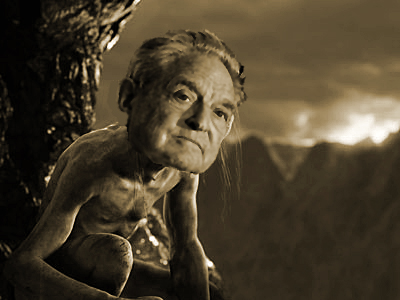 W. Clement Stone, the millionaire insurance executive, apostle of positive thinking and devoted supporter of Richard Nixon, was once famous for saying: “All I want to do is change the world.”

To that end, in 1972, Stone gave $2 million to Nixon’s re-election effort. Campaign-finance reformers and other good-government types were horrified; they considered Mr. Stone’s contribution so outsized and so corrupt that they made it Exhibit A in the case for what became the landmark Federal Election Campaign Act Amendments of 1974.

Adjusted for inflation, Stone’s gift would be nearly $9 million today. That’s still a lot of money, but it’s no longer enough to win the political generosity sweepstakes. That title is now held by the billionaire financier George Soros, who this year has given about $15 million to Democratic support groups like America Coming Together and MoveOn.org as part of a personal crusade to defeat George W. Bush in next year’s elections.

In the coming months, Mr. Soros will likely contribute even more; he has said that he would give every penny he had if it would guarantee the president’s defeat. (And to think that just a short time ago Mr. Soros was avidly supporting campaign-finance reform groups, so dedicated was he to ridding politics of the corrupting influence of big money.)

Just how much is apparent in Mr. Soros’s “The Bubble of American Supremacy” (PublicAffairs, 207 pages, $22), a brief but passionate screed against what Mr. Soros believes to be the wrongheadedness of the Bush administration’s policies.

Mr. Soros is most distressed by the president’s war on terrorism. He feels that, in general, the U.S. should deal with the terrorist threat by giving out more foreign aid, enacting more equitable trade laws and being a more constructive, cooperative member of the world community. Mr. Soros argues that the U.S. should have treated the Sept. 11 attacks as a criminal matter, not an act of war. “Crime requires police work, not military action,” he writes.

In fact, Mr. Soros, while conceding that the Sept. 11 attack was a bad thing, wonders why Americans got quite so upset about it. “How could a single event, even if it involved three thousand civilian casualties, have such a far-reaching effect?” he asks, apparently sincerely. The answer seems to lie “not so much in the event itself but in the way the United States, under the leadership of President George W. Bush, responded to it.”

It’s an argument familiar to anyone who spends time surfing left-wing Web sites or listening to the Democrats running for president: Mr. Bush, instead of choosing the path of careful police work and international cooperation, recklessly took the nation to war. By doing so, the U.S. became, in Mr. Soros’s words, “the victim turned perpetrator.”

Why did President Bush do such a thing? Because he came under the spell of a small group of–by now, the reader can see this coming a mile away–“neoconservatives” and their ideology of American supremacy. In particular, Mr. Soros believes, the president and some top officials in his administration were influenced by the Project for a New American Century, the Washington think tank that the anti-Bush left sees as the nerve center of the neoconservative conspiracy. Mr. Soros seems positively obsessed with the Project; in this short book, he reprints its entire mission statement, along with a description of each founder.

According to Mr. Soros’s theory, the ideologues at the Project had a longstanding war plan to impose American supremacy on the world. But they faced two obstacles: George W. Bush, their chosen president, did not have a mandate to take such drastic action, and America had no clearly defined enemy. Then, almost as if by magic, Sept. 11 “removed both obstacles in one stroke,” Mr. Soros writes.

The newly empowered president declared war on terrorism, and the nation went along. “The administration deliberately fostered the fear that has gripped the country,” Mr. Soros continues. “It then used the war on terrorism to pursue its dream of American supremacy.” And a sensible course of foreign aid and trade policy was abandoned in favor of war.

THE CON IDEOLOGY TO MISLEAD AMERICANS BY G.E./COMCAST AND TO EMPOWER SOROS INSIDE TRADING – ITS ALL ABOUT MONEY!

By making this theory the centerpiece of his book, Mr. Soros veers close to what has become the left’s equivalent of black-helicopter paranoia. But the most irksome thing about his argument, besides its conspiratorial leanings, is Mr. Soros’s failure to acknowledge that the path he advocates–treating terrorism as a criminal issue and stressing cooperation with other nations–was tried for a dozen years through the first Bush and both Clinton administrations. President Clinton talked and talked about bringing terrorists to justice. And yet by and large he did not, and he certainly did not diminish the threat al Qaeda posed to the U.S.

Still, Mr. Soros thinks the U.S. would do well to take up “a doctrine of preventive action of a constructive nature,” like “fostering the development of open societies.” He calls this bold plan the “Soros doctrine.” Yes, Mr. President: Throw out your own ideas about fighting terrorism and its sponsors and take up the Soros doctrine instead! And while you’re at it, apologize, too–Mr. Soros is particularly unhappy that Mr. Bush was “unrepentant” at his speech to the United Nations in September.

Mr. Soros says he is so concerned about the “excesses” of the Bush administration because they bring to mind what went on in Nazi Germany. A Jew who grew up in Hungary under both Nazi and communist domination, Mr. Soros writes: “When I hear President Bush say that ‘either you are with us, or you are with the terrorists,’ I hear alarm bells.” Speaking to the Washington Post in November, he was a bit more explicit, claiming that Mr. Bush “reminds me of the Germans.”

Eichman and Soros: A Case in Perfidy

At any given time, there is some small sliver of the American population that believes the president–any president–is a Nazi. Those people are usually thought of as nut cases. Now they can count among their number one of the world’s richest and most influential men.

Of course, the majority of Americans approve of Mr. Bush’s prosecution of the war on terror. And that worries Mr. Soros. “I am distressed,” he writes, “that the public is not as alarmed as I am.” So he is determined to spend whatever it takes to alarm them. Powered by his money and the massive egomania that infuses this book, he can do a lot.

Back in the 1960s and 1970s, W. Clement Stone wanted to change the world by applying the lessons of books like “Think and Grow Rich” and “The Power of Positive Thinking.” That might have been silly, but at least Stone wasn’t a dangerous man.

The same cannot be said of George Soros.