You can’t make this stuff up. While NYC officials and the Gloomberg administration are working overtime to erect a triumphal mosque at Ground Zero, Wal-Mart, the nations’s largest private employer, has been denied entry repeatedly. Wal-Mart was forced to drop its plans for its first New York city store. And New York was the loser for it. The lower middle and middle class was the loser for it. (More at Atlas here.)

Atlas 2006 flashback: You Can Keep Wal-Mart out of the NYC, But you can’t Keep NYC Outta Wal-Mart

Perhaps if Wal-Mart proposes a store with a mosque on its two top floors looking down on the hallowed ground of Ground Zero, they can get Gloomberg to ram it through and the taxpayers to fund it.

Once again, Wal-Mart is trying to move into Gotham, and yet again, the communists and dhimmis are protecting us from Wal-Mart while fighting tobuild an Islamic fortress at Ground Zero.

City Council Speaker Christine Quinn, who stood behind Mayor Gloomberg while he whined that the terrorists would win if we didn’t allow stealth jihadists to build a victory mosque at Ground Zero, joined a labor protest against the retailer last June, the Daily News reported. 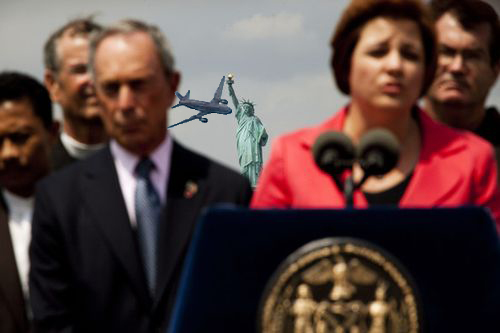 These clowns miss the whole point of Lady Liberty. She stands, not for the sharia, but for individual rights.

The Wal-Mart opposition movement is a political fraud. Wal-Mart has saved towns (all the way back to Bentonville, Arkansas).  The anti Wal-Martmovements are dangerous. Big union backed, this represents the tendency to move toward dictatorship policy and collectivism, and away from freedom.

Who are these polticians? Who elected them our wardens? Wal-Mart would provide jobs, generate tremendous sales, and offer low prices that would benefit low-wage earners greatly. Wal-Mart pays above minimum wage, has an excellent pay plan, always promotes from within, and has an excellentbenefits package. And WTF is wrong with the lowest prices in town? An economy of abundance works! Not an economy of scarcity. Read Basquiat,Economic Sophisms.

Wal-Mart makes it possible for lower wage earners to purchase items they could never afford at regular store prices. Wal-Mart enhances the quality of life for all New Yorkers. Hell, all Americans.

Have a look at this 2006 graph before this Obamaconomy:

Mr. Pinko over at IOTW has the money post:

Ground Zero Victory Mosque – They have a right to build there. We’ll also help pay for it.

***************************
MANHATTAN — As rumors continued to swirl about Walmart moving to the Big Apple, the City Council has scheduled a hearing for next month to debate the merits of bringing the retailer to New York, according to the council’s website.

The event, titled “When Wal-Mart Comes to Town: The Effect on Small Businesses and 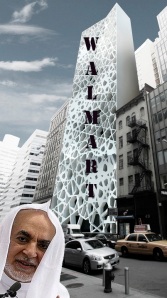 Communities: A Historical and Prospective View,” is a joint hearing by the Committee on Small Business and committees on community and economic development. (We had an event, “When Radical Muslims Come to Town”)

“We’re excited to have this hearing and get all the information out in the open so it can be debated,” Bennett Baruch, deputy chief of staff to Councilwoman Diana Reyna, told Crain’s New York Monday. Reyna chairs the Small Business Committee.

The Big Box retailer, which is the country’s largest private employer, has tried several times to break into the New York market — most recently in 2005.

Walmart spokesman Steven Restivo said earlier this month that the company is once again looking at the possibility of opening a New York City store. Restivo would not confirm, though, whether they are looking at locations in Manhattan.

Public support for the store entering the city seems uncertain at best.

How about? “You know, it isn’t that we don’t want Muslims. We just don’t want radical Muslims celebrating over Ground Zero.”

UPDATE: Rauf would never be seen in such a slum. Armaros points to this Atlas post:

As Rauf and Khan have become life style icons in fashion, fast cars and who knows what else…

Why would they support a chain which supplies small businesses and low income families with affordable food and clothing.

To these cocktail party types, WallMart is like how Paris Hilton explained it to be: “They sell walls there right?” ….

Rauf might run into one of the tenants in his derelict NJ slums — wouldn’t that be …karma.