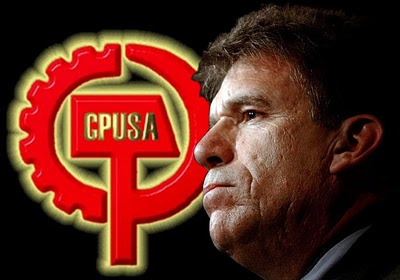 Why is this important?

A key part of Mark Ritchie’s job is to oversee electoral recounts in Minnesota.

In early 2009 Mark Ritchie judged that his Wellstone Action Advisory Committee and Democratic-Farmer-Labor Party colleague Al Franken had won a Minnesota U.S. Senate seat, even though Republican opponent Norm Coleman was ahead on election night.

The recount was dogged with controversy, with allegations that felon’s votes were illegally counted.

Currently, Mark Ritchie is overseeing another election recount. This could give
the Minnesota governorship to another of Ritchie’s Wellstone Action
Advisory Committee and Democratic-Farmer-Labor Party colleagues, Mark Dayton.

In October 2009 Mark Froemke was the Fargo Moorehead organizer for a 10
Days of Labor Action campaign in support of Minnesota gubernatorial
candidate Mark Dayton.

The Communist Party has infiltrated the Democratic Party in several states and openly supports the Democrats against the Republicans in its publications.

The fact that Mark Ritchie has documented covert ties to the Communist
Party USA must bring his neutrality as an election overseer into severe
doubt.

The voters of Minnesota deserve better.