Kate and William attend polo game in Santa Barbara
The marriage of a Rothschild-Jewish parasite named Billy Windsor (“Prince” William) to the hideously ugly and unfeminine anorexic child of British upper-class privilege whose sluttish name is one of that called “Kate Middleton”, should stir outrage not only in the hearts of all true patriotic Englishmen and Englishwomen, but incur, for their licentiously ungodly behaviour, the wrath of supreme vengeance upon the house of an unwholesomely decadent family that continues to not only exploit the gullibility of indigenous Britons, but the fawning celebrity worship of a world that has quite simply lost its collective mind.

As Long As “WE THE PEOPLE” Remain In The Dark ~ NWO Gang Remains Dead Serious: Foreclose On The British Empire With Glass-Steagall.

As a freeborn and patriotic Englishman, I unapologetically expel from the furthermost reaches of my anus the most rancid and hideously foul smatterings of diarrhoea upon every aspect of the anti-English and treasonous “Royal Family”.

The Windsors hate not only the British people, they take us for fools bedazzled by their worthless shenanigans; and they laugh contemptuously at our imbecilic credulousness.

The marriage of a Rothschild-Jewish parasite named Billy Windsor (“Prince” William) to the hideously ugly and unfeminine anorexic child of British upper-class privilege whose sluttish name is one of that called “Kate Middleton”, should stir outrage not only in the hearts of all true patriotic Englishmen and Englishwomen, but incur, for their licentiously ungodly behaviour, the wrath of supreme vengeance upon the house of an unwholesomely decadent family that continues to not only exploit the gullibility of indigenous Britons, but the the fawning celebrity worship of a world that has quite simply lost its collective mind.

I speak as a true-born and freeborn Englishman who loves my nation more than any member of the illegal and usurper “Royal Family” could ever hope to enunciate in words that do not betray their utter contempt and disgust for working and middle-class individuals who slave, labour and pay illegal taxes to “Her Majesty’s” Inland Revenue Service under the illicit and unconstitutional British Crown System that has held sway over the minds of all Britons since the illegal deposition of the Republic. 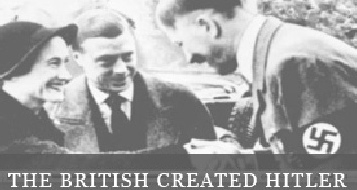 I also speak for the millions of blue-collar workers the world over, including American citizens, who have absolutely no idea as to the extent to which this loathsomely dysfunctional and psychopathic Windsor-Rothschild mutation remains in complete control of everything they thought of as being sovereign unto themselves, yet which was slyly sequestered by means of international British Admiralty Law. Under BAL, every American citizen is still is a subject to the British Crown. You think you’re free? Then think again. America’s social security laws have always required “royal” assent. You are owned by the British Crown: lock, stock and barrel.

Prince Of What? & Royalty Of What?

They Are Drunk With Egomania & Living Off Of Fraudulent Taxation & Other Financial Derivative Scheming.

Prince Billy Windsor: The Makings of a Modern Day Nazi

Prince William is the bastard child of a bastard monarchy set in place by a bastard regime of bastard multi-billionaire bankers who own, directly or indirectly, over two thirds of the world’s resources. The Queen, an old hag of a pretentious bitch who seeks pleasure in killing innocent animals while her fellow citizens scramble for crumbs that fall from her banquet’s table of financially kosher dishes, and who is singularly inured against the rising tide of anger to every aspect of the City of London’s larcenous banking aristocracy, should be reviled as one the most hated personages in modern times. She is the richest woman in the world and a servant of the murderous, conniving, Zionist, Rothschild dynasty.

This utterly despicable whore of secretive international banking and thief of the sweat and labour of hard-working and patriotic men and women deserves nothing more than a swift razor slash to the throat while she is ensconced on the Royal Shittery, left to bathe languidly in the the faeces she has smeared upon the faces of all true English folk ever since her illegal coronation in 1953.

Under the guise of the illegitimate British Crown System of government, my people, the English, have been led by the nose from one disastrous war to another and into the Fascist-Bolshevik construct known as the European Union. She, Elisabeth Windsor, wrongfully crowned on a throne that did not sit atop the famed “Stone of Destiny” (purloined by Scottish Nationalists) is not only the most traitorous harlot ever to have besmirched the pages of British history, but a liar, an imposter, and a money-grubbing imperialist who, like her husband, deems all humans on the face of this earth to be a curse unto nature.

And of what is she made? The Windsors claim to be of Germanic “royal” ascent, but, in all reality, like all perniciously canny thieves and robber barons, they climbed out of the same sewer that spawned the venomous rats who rule the world: the Rothschilds – virulently cunning Power-Jews who actually had it within themselves to outwit the superlatively higher intelligence of a Celtic Race that should have known better, but was betrayed, not by thirty pieces of silver, but by their own blue-eyed credulity.

You’re English. You’re waving the Union Jack. You’re singing “God Save The Queen”. Do you know what you look like? You resemble one of those horribly abused children depicted in Israeli snuff movies taking it in the shaft, the mouth and every which way they choose before blowing your brains out. You’re a brainwashed fuck-up dripping from head to toe in “royal” semen. Intellectually, you are dead from the knees up. And, worse, you’re actually smiling and enjoying the show!

Admit it, Sunshine. You’re a twat. You know you’ve been taken for a ride; but, come on, Pal, you can always get off this merry-go-round called the “United Kingdom”. It’s hard to let go of the Union Jack-Off. It’s always turned you on for the wrong reasons. Time to burn that fucking flag, which represents centuries of oppression and colonial, divisive, class hatred.

You are an Englishman. Therefore, fly with pride the Republican Flag of Saint George from every building in the nation. This is your identity. The flag is a symbol of your freedom from UK oppression and slavery and your utter disgust with the Windsor Parasitic Elites, the City of London, the European Union and its Zionist overlords.

Those whom we falsely worship shall lead us into the pit of despair. Take it from a lone and very brave individual called John Anthony Hill, who was arraigned for telling the truth about MI5′s carefully orchestrated attacks on British civilians in one of the most hushed-up campaigns of internal false-flag terrorist propaganda since the last Zionist-instigated war against our fellow German Anglo-Saxons and Celts:

(The British Crown has ordered Google to remove this vitally important video before Mr Hill’s kangaroo-court trial. I encourage all readers to download this phenomenally incisive documentary before its withdrawal on 29 April and share it extensively. The British Crown, its MI5 murderers and Tony Blair must be brought to justice.)

The Truth About The British Monarchy

The Nail In The Coffin Of The New World Order

Although, as a republican patriot, I do not endorse this Mr Hill’s claims in respect to royal lineage and the necessity of a monarchical system of governance, I am firmly behind him in every detail accruing to the international criminality of the Windsor Mafia and their equally depraved and murderous intelligence services.

Rothschild’s New World Order Multiculturalism: Its All Just A Money Making Hoax ~ That Demands Loss Of Your Own Identity.

This week will see the marriage of one of the world’s biggest Welfare Scroungers and Parasites, Billy Windsor (“Prince” William), to a cheap plastic tart who resembles nothing more than a neurotic stick-insect whose only claim to fame is having a mouth wide enough to accommodate yet another Windsor-Rothschild blow-job.

At the age of fourteen I saw through the programming and brainwashing with which British children were bombarded courtesy of the subversive, lying, propagandistic BBC and prayed that, one day, my people would chase these aristocratic fraudsters down the street and lynch them from the nearest lamp-post.

Thirty-seven years later, I have never lost hope. For I shall forever love England. It is a love so fearsome, and shared so very passionately by many others, that it carries within itself the power to consume all of its enemies. We can begin by hanging the colonial Parasite Windsor Elite under the Republican English Flag of Saint George.

———-
Michael James, an English republican patriot, is a blacklisted former freelance journalist resident in Zionist-occupied Germany since 1992 with additional long-haul stays in East Africa, Poland and Switzerland. He advocates a Leaderless Resistance to destroy the Soviet European Union and prays for a free and independent England, shorn of all alliances with the EU, UK, NATO, the UN, WTO, IMF, Israel and any other treacherous international cabal or entity.

I know thy works, and tribulation, and poverty, (but thou art rich) and [I know] the blasphemy of them which say they are Jews, and are not, but [are] the synagogue of Satan.