Richard Fine outlines the criminal activity where members of the California Judiciary, are involved. He says this activity qualifies as “organized crime” and explains why their activities should qualify for prosecution under the RICO ACT ( Racketeer Influenced and Corrupt Organizations Act).

DUTTON: Dr. Fine is turning up the heat. He’s declaring that the judges of Los Angeles Superior Court are part of organized crime and should be prosecuted under the RICO statute.

FINE: No question about it. It’s a federal violation and essentially if the United States – U.S. Attorney or if Attorney General Holder has the guts to prosecute these people, these people will be in jail in what we call a New York minute.

DUTTON: This is an extraordinary accusation. We asked Dr. Fine to explain this serious charge. 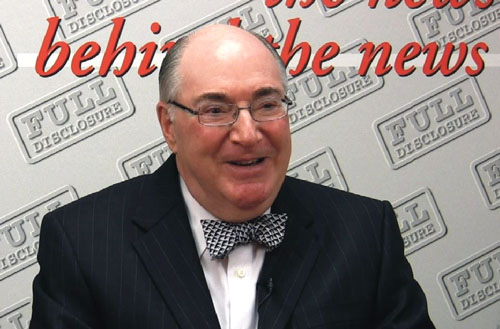 FINE: You have a judicial, a group of member of the judiciary that have effectively engaged in what we call a RICO scheme which is a Racketeer Influenced Corrupt Practices Act scheme. And the basis of the scheme is that you have the illegal payments. You have them taking place time and time again. You have the judges obstructing justice. That is a RICO scheme.

DUTTON: And so according to Dr. Fine this corruption of racketeering isn’t just isolated only to the Los Angeles Superior Court.

FINE: The entire judiciary system in California is susceptible to this scheme and the 38 million people of California are victims of this scheme.

DUTTON: Dr. Fine has the evidence to back up his claim of judicial corruption.

DUTTON: If the judges receiving payments from the county and one of the parties appearing before him is represented by the county aren’t the judges supposed to disclose this fact to everybody in the courtroom?

State court judges are bound to follow federal law and that’s under Article 6 Clause 2 of the United States Constitution.

DUTTON: Perhaps we’re being optimistic to hope that some judges somewhere in the entire state recognizes this obvious conflict of interest and is refusing these illegal and unconstitutional payments. Isn’t there at least one judge with integrity in the state?

FINE: To my knowledge I don’t know of any judge that has turned down any payments.

DUTTON: So if they’re all taking the payments shouldn’t they at least inform the parties they’re judging? We asked Dr. Fine, “Who’s responsible for making sure everybody knows there are illegal payments being paid to the judges?”

Addition to that such action is going to be an obstruction of justice because what has happened is that L.A. County has bought the judiciary and by doing that they have obstructed justice by also denying people a fair trial. Now a third thing takes place and this is that they’ve committed an extrinsic fraud upon the court because what they’ve done by having bought the court, they’ve stopped the other side from obtaining a fair trial. And when you do what is known as an outside action of stopping the other side from obtaining a fair trial you’ve committed an extrinsic fraud because that’s something that the other side really can’t find out about and it has nothing whatsoever to do with what the case is about. If it had something to do with – would be the proof of the case it would be considered an intrinsic fraud and it would be something that the other side could prove within the confines of the case, but this is something totally outside of the case, what we call collateral to the case. So it becomes an extrinsic fraud and the cases hold that when one party does something or something happens that is outside of the case and it prevents through any means whatsoever someone getting a fair trial, that’s extrinsic fraud and that actually deprives the court of jurisdiction. And when there is no jurisdiction anything that the court does is void. So that gives you sort of a picture of what is happening here.

DUTTON: And the picture is looking mighty bleak. We want to know what you the viewers think. Please respond to our survey and leave your comments below. Number one, do you think that the cover-up of the illegal payments to judges should be considered racketeering and should be prosecuted under the RICO Act? Yes or no.

Number two, do you think that by the judges not disclosing the illegal payments to the parties in the courtroom should be considered obstruction of justice? Yes or no. And number three, do you think that judicial acts of extrinsic fraud are more serious than obstruction of justice? Yes or no? Please be sure to leave your comments below. I’m Leslie Dutton. Thank you.

← U.S. House Oversight And Government Reform Committee Investigation: Obama’s ‘green jobs’ push is ‘propaganda’
Where Is The $12 Billion Dollars We Sent To Iraq That Weighed 360 Tons On C-130 Cargo Planes? →