“Permit me to hint whether it would not be wise and seasonable to provide a strong check to the admission of foreigners into the administration of our national government; and to declare expressly that the Command in Chief of the American army shall not be given to, nor devolve on any but a natural born citizen.”

On Wednesday, November 9th at 2:00 PM EST, FEMA and the FCC conducted the first ever nationwide test of the Emergency Alert System designed to allow the President to address the American people during a national emergency.  Featuring a live “presidential” alert code, the test instructed TV and radio stations that the alert took priority over all other programming.

According to FEMA’s mission:

FEMA’s mission is to support our citizens and first responders to ensure that as a nation we work together to build, sustain, and improve our capability to prepare for, protect against, respond to, recover from, and mitigate all hazards.

However, there is no mention as to EMERGCON

From Wikipedia:
EMERGCON (Emergency Condition) is a state of readiness that is separate from DEFCON, or defense readiness condition used by the United States, in that it incorporates civilian measures in addition to the DEFCON military measures.

Generally, EMERGCONs are a state of readiness following an ICBM (intercontinental ballistic missile) attack. Other forces go to DEFCON 1 during EMERGCONs. There are two types of EMERGCONs:

Although the United States military has gone into defense readiness various times (such as the Cuban Missile Crisis), it has never had a major EMERGCON.

This TOP SECRET document (declassified) called Emergency Action Procedures of the Joint Chiefs of Staff was the preparedness manual for their Emergency Alert System published in 1981.

The Defense Emergency condition, or EMERGCON is assigned the code name “HOT BOX”. 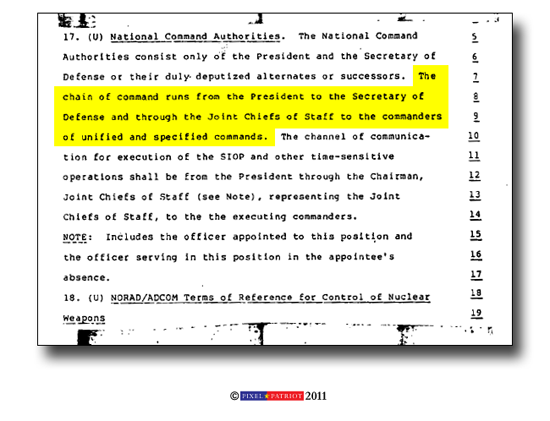 Although the Chain-of-Command answers to the Commander-in-Chief, the government itself; by the People, of the People, and for the People; derives its authority from the consent of the governed.
And “We the People”, the sovereign authority of these United States find ourselves facing many national security threats due to our elected Representatives not upholding their oath, encroaching on our God given unalienable rights and liberties with impunity and no longer recognizing the will of the people.
From the Declaration of Independence –
“We hold these truths to be self-evident, that all men are created equal, that they are endowed by their Creator with certain unalienable Rights, that among these are Life, Liberty and the pursuit of Happiness. — That to secure these rights, Governments are instituted among Men, deriving their just powers from the consent of the governed”
Preamble to the U.S. Constitution –
“We the People of the United States, in Order to form a more perfect Union, establish Justice, insure domestic Tranquility, provide for the common defence, promote the general Welfare, and secure the Blessings of Liberty to ourselves and our Posterity, do ordain and establish this Constitution for the United States of America”
John Jay, our nation’s first Chief Justice-
In a letter on July 25, 1787 to George Washington; who at the time was presiding over the Constitutional Convention; said:

“Permit me to hint whether it would not be wise and seasonable to provide a strong check to the admission of foreigners into the administration of our national government; and to declare expressly that the Command in Chief of the American army shall not be given to, nor devolve on any but a natural born citizen.”

Founding Father and America’s first US Supreme Court Chief Justice John Jay correctly summarized the reason our new nation (and the fight for its liberty and independence) was successful. He wrote in Federalist 2 –

“With equal pleasure I have as often taken notice that Providence has been pleased to give this one connected country to one united people–a people descended from the same ancestors, speaking the same language, professing the same religion, attached to the same principles of government, very similar in their manners and customs, and who, by their joint counsels, arms, and efforts, fighting side by side throughout a long and bloody war, have nobly established general liberty and independence.”

In other words, a United Constitutional Republic can only exist within the framework of certain rather narrow and finite conditions. Remove those conditions and the framework for liberty and limited government falls apart.

Barack Hussein Obama II has publicly admitted his father Barack Obama Sr. was a Kenyan native and a British subject whose citizenship status was governed by The British Nationality Act of 1948.  Barack Obama Sr. never became a U.S citizen. Therefore, Barack Hussein Obama II is not now and never can be a natural born Citizen of the United States by virtue of his recognized allegiance to a sovereign foreign nation inherited from his father precluding him from eligibility for the Office of the President of the United States. 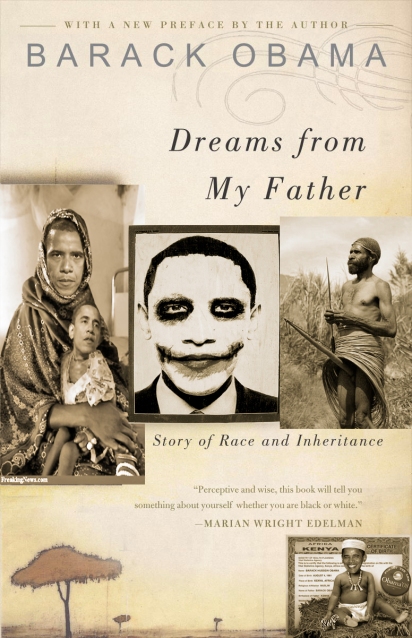 No Person except a natural born Citizen, or a Citizen of the United States, at the time of the Adoption of this Constitution, shall be eligible to the Office of President; neither shall any person be eligible to that Office who shall not have attained to the Age of thirty five Years, and been fourteen Years a Resident within the United States.
On January 20th, 2009 a usurper became the putative President of the United States casting our nation into a Constitutional crisis.  Though the ramifications are seemingly incalculable, it is self-evident that if Barack Obama is given a pass from justice when history tells us it can and should be blind; then the Rule of Law and the Constitution as the bedrock of our Republic will be utterly meaningless.
The TRUTH remains TRUE even if it falls on deaf ears and a blind eye.

Even more grave still, Barack Obama having yet to conclusively prove his eligibility and facing challenges with hundreds of military plaintiffs, not withstanding none had yet to be heard on the merits of the case; on December 1st, 2009 announced at West Point Academy that as Commander of the U.S. Armed Forces he was sending an additional 30,000 troops to Afghanistan on his orders.
The specter of a putative President sending a soldier to take the life of another without a legitimate Constitutional mandate weighed heavily on the heart, mind and conscience of a great many honorable men and women serving their country in the military.  The moral quagmire and breach of trust beset upon the military officers sworn to defend the Constitution became too great to continue and could not be ignored. The line in the sand had to be drawn.
LTC Terrence Lakin, a highly decorated 18 year Army officer and lead Flight Surgeon charged with caring for Army Chief of Staff General Casey’s pilots and air crew tried every way he could through the channels in his Chain-of-Command to seek proof of Obama’s eligibility. 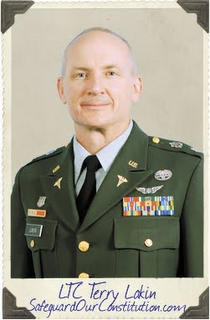 At every turn he was denied.

LTC Terrence Lakin invited his own court-martial in an effort to know with certainty that the orders coming from the Commander-in-Chief are in fact valid.

On any given day, orders may be directed from the President and Commander-in-Chief through the Secretary of Defense (10 U.S.C. § 113 (b)), the Joint Chiefs of Staff (10 U.S.C. § 153 (a)), or even during emergency response procedures which has a direct impact on the civilian population.

Therefore, an ineligible Presidency would surely qualify as an EMERGCON and an overt attack against the United States of America.

The irony of the nation and its citizens undergoing a national alert drill while every level of government is abrogating its responsibility to uphold their oath to the U.S. Constitution and the Rule of Law is reprehensible.

With Americans across the country armed with a mountain of evidence that Barack Hussein Obama II is not a natural born Citizen and has committed both fraud and forgery by releasing fake birth certificates and using a Social Security number issued from CT, a state in which he has never lived; the process of gaining ballot access in 2012 will surely find him in the “HOT BOX.”
Pixel Patriot