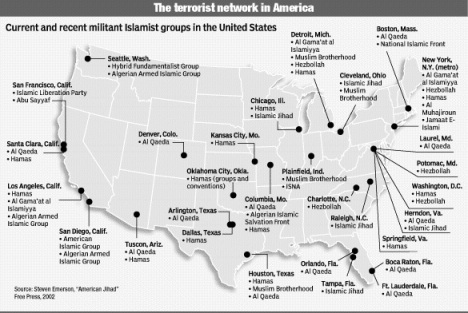 America’s State Militia Warns Congress To Back Off!

“All I ever wanted was to be a cop. And to be Sheriff in my hometown was a dream come true. But some other things happened that brought me to the point of suing the federal government,” former Sheriff Richard Mack told the crowd of Cincinnati 9/12ers and other listeners that had gathered at Lakota East Freshman Campus Auditorium on Thursday night. Many people still refer to him as “Sheriff” as a way of expressing respect.

Sheriff Mack’s story is an amazing journey that brought him to the realization that being a cop isn’t about writing tickets and being a tax collector and revenue agent — it’s about keeping the peace.  His journey includes studying to be an FBI agent in Utah where he lived with his wife and, at the time, their only child, a baby boy. He worked his way through college as a part-time “meter-maid,” was hired as a full-time police officer, and later became an undercover cop. That particular position was one that he and his wife strongly disliked because it was especially hard on them as a family. The nature of the work kept them apart for 4-5 days at a time, even preventing him from being able to call home and speak to her. He confided that it was likely much harder on her because of the stress and burden of knowing that he was out there with x-cons, drug dealers and street gangs. He said that it also taught him a lot about the drug war, the drug culture, and brought him to a place of questioning all of it, which led him to conclude that it’s actually unconstitutional and that he couldn’t support it.

He was later assigned back to patrol. On one particular day on a relatively quiet street where he was writing tickets and in a marked car, he witnessed a driver with three misbehaving children blow right past him and run a stop sign. By the time the lady saw him, she knew she had been caught and just automatically pulled over. From his cruiser, Mack could see her throw her arms up as if to say, “What else could go wrong today?”

As he was getting out of his cruiser, her weary arm was draped out of the car window with her license and registration in hand — just waiting in surrender.

Mack’s initial thoughts were, This is going to be easy! She’s not making any excuses, she’s not crying, this lady is just in no-wheres-ville.

Upon reaching her vehicle, he noticed that her depressed, dejected and discouraged eyes continued to stare into the distance. And as he was getting ready to hand her the ticket, he paused. She was driving a deteriorating Datsun that couldn’t possibly have been worth even $350 dollars. He glimpsed at the kids, and back at the lady. Then he looked at himself.

He told the crowd that he knew the answer to all those questions, and that it made him more depressed than the lady.

Mack took the ticket and walked back to his car without ever saying a word to her: “Because I was too engrossed and enveloped in my own shame,” he said. “I didn’t want to give her a chance to thank me for not giving her that ticket. That would have only exacerbated my shame and there was no thanks deserved for what I had become; a by-the-numbers jerk.”

After tearing up the ticket and properly disposing of it, he said that he did the rest of his shift that night without writing any more tickets – wondering why he was a cop.

The next day he arrived at work early and went to the city clerk’s office, not really knowing why at first. A vague memory of taking an oath of office when he first took the job popped into his mind. He verified his memory of the oath with the clerk and she confirmed it, making a quick copy of the oath and handing it to him before he could even ask.

He read it, said he became more depressed than the day before and realized that he was a liar and a hypocrite.  When he took the job, his motivation was that he thought it would be fun, exciting and exhilarating – especially when you’re in high speed pursuits. “Those are probably the biggest adrenalin rushes I’ve ever felt,” he admitted. But he didn’t want to be that person anymore and was ready to quit without even a 2 week notice. While walking to the Chief’s office and ready to hand in his badge, thoughts of what his wife might say came to mind. Not being able to pay the bills because he had decided that he is a liar and a hypocrite would never fly. He decided she’d tell him just to stop being a liar and a hypocrite. That even seemed like the better plan. So he decided not to quit and began reading the Constitution whenever he had the time available, studying how it worked together with his oath of office and state sovereignty.

Not too long after that, a seminar was offered entitled, “Constitutional Studies

for Law Enforcement Officers.” The name of the instructor was W.Cleon Skousen. Today, many know him as the author of the book The 5000 Year Leap, very popular among Tea Partiers and 9/12 groups. But the material used in the seminar Mack attended was Skousen’s then popular book, The Making of America. 240 cops attended.

Then Mack challenged the audience, “Wouldn’t it be miraculous for us all in this room tonight, and for all Americans if we actually had local leaders and state leaders (who would do this), because we know we’re never going to get federal leaders to do this, but Governors, State Reps, State Senators, County Commissioners, and Sheriffs especially, who will actually keep their oath of office?  Do you see the miracles here? Do you see what would happen? Where Sheriffs would actually have a departmental meeting, talking to all their deputies and saying, ‘What can we do to make sure we’re following the Bill of Rights? And show me your pocket Constitution where the action you took with that citizen is constitutionally allowed. And that would get everyone concentrating on one thing in the judicial, executive and legislative branches…the Constitution. Because if we do, the people get back their freedom.”

Mack’s promise to himself to never be on the wrong side was put to the test with the Clinton administration’s insistence that the Brady bill be enforced. Mack was directly affected because he was a Sheriff in Arizona at the time, saw the bill as unconstitutional, and decided to sue the Clinton administration rather than break his oath: an oath he swore to the people of Arizona in the sight of God Almighty. By God’s grace, he won that case. He goes into some detail about that in his book, The County Sheriff: America’s Last Hope, and also offers valuable insights into the freedoms that America’s Constitution extends to “We the People.”  His book can be purchased at
www.sheriffmack.com.

Sheriff Mack graciously agreed to an interview with Examiner.com on the issue of state sovereignty. Here are some of the highlights:

Examiner: Are you familiar with the executive order that Obama signed (on January 11) which includes his appointing of 10 State Governors who will meet with the Secretary of Defense and other departments to discuss matters of mutual interest pertaining to the National Guard, homeland defense, and Civil support activities?

Examiner: I know this is an executive order, but isn’t there something about this council of governors, or its functions, that is unconstitutional?

Sheriff Mack: They can get together if they want and talk about areas of mutual concern, but it sounds to me more like Obama is trying to get them on his side to make sure they by-pass state sovereignty issues that governors are being compelled to look at from their state Tea Party organizations.

Nobody is trusting any of these executive orders by Barak Obama right now, and the governors don’t have to participate. If they’re participating, it’s all on a volunteer basis, just like the states do not have to participate in nationalized healthcare. And the law suit that I filed against the Clinton administration states very clearly, “The state legislatures are not subject to federal direction.”

Examiner: What can American citizens do to fight something like this? It seems these 10 State Governors are stepping into matters beyond their own states?

Sheriff Mack: They are. The best things that citizens can do are to make sure that their governors know how they feel. They hear from the Tea Party groups (who have) changed history already. And right now, every state legislator, county legislator and county official, especially sheriffs, need to hear how their constituents feel…all (these officials) have sworn an oath to uphold and defend the Constitution.

Examiner: If a State Governor such as Ohio’s should refuse to enforce state sovereignty in relation to the healthcare bill and the cap and trade bill, do you know of any recourse that Ohio citizens would have if these bills would pass?

Sheriff Mack: Well first of all, the governor needs to know the truth about state sovereignty. That’s the first thing that we have a responsibility as citizens to do. Governor Strickland needs to look at the 10th amendment and the profound truth behind the power of the states. If the state of Ohio is indeed sovereign, like my Supreme Court’s decision said they are, and like the constitution says they are, and the Founding Fathers said we are, then his responsibility is to stand for Ohio. Not go along with Washington DC, not worry about following all the dictates of Washington D.C. so we (Ohio residents) keep the money, but stand for Ohio. That’s his job. And when you get the governors working hand-in-hand with the Sheriffs of the states, there’s no stopping the Tea Party Movement, there’s no stopping the principles of freedom that we will rediscover.

Sheriff Mack: Well first of all, you’re going to have to have some local officials and governors with some courage. The answer is simple. Implementing it is going to take some courage and some real know-how.

Let me tell you what Oklahoma is doing: I spoke before the Oklahoma State legislature about 3 weeks ago…and it’s being proposed that if the federal government gets mad at any particular state and they threaten to withhold funds, which is extortion – legalized extortion – we (the states) aren’t going to send you (the feds) any more money…taxes that (in this case) Oklahoma collects will be paid to Oklahoma city, and they will forward on to Washington DC what they think they ought to send…The richest state in the union will be the first state that will have the guts to do that.

Examiner: Even if a Sheriff realizes the depth of his or her authority, why would you say that he or she might be hesitant to choose to stand in that authority?

Sheriff Mack: Well I hope they’re not hesitant. I hope they learn their duty and learn their true power, and it comes with education and that’s what my book is all about, is educating citizens and Sheriffs alike with the proper role of the Sheriff. The Sheriff is the only elected law enforcement officer in the United States and in the country. He’s the only one that directly reports to the power source: the people…he has promised them (in his oath) that he would uphold and defend and protect their constitutional rights. So he has basically promised to be the people’s protector from the wolves. Doesn’t matter where the wolf comes from.