In the midst of the political turmoil engulfing Egypt and much of the Arab world, last month’s revelation that Pakistan has doubled the size of its nuclear arsenal over the past four years has been largely ignored.

Nuclear proliferation analysts from the Federation of American Scientists and the Institute for Science and International Security (ISIS) assess that since 2006, Pakistanhas increased the size of its nuclear arsenal from 30-60 atomic bombs to approximately 110. That makes Pakistan the world’s fifth largest nuclear power ahead of Britain and France.

As for delivery systems, according to The Washington Post, Pakistan has developed nuclear-capable land- and air-launched cruise missiles. Its Shaheen II missile, with a range of 2,400 kilometers, is about to go into operational deployment.

The Obama administration has been silent onPakistan’s nuclear proliferation activities. As ISIS President David Albright said to theWashington Post, “The administration is always trying to keep people from talking about this knowledgeably.

They’re always trying to downplay the numbers [of Pakistan’s nuclear warheads] and insisting that ‘it’s smaller than you think.’” Pakistan’s nuclear growth goes on as its economy is in shambles, its government is falling apart and a large portion of the country’s territory is controlled by the Taliban.

Pakistan is the largest recipient of US foreign aid. In 2009 Congress approved a five-year $7.5 billion civilian aid package. Last October, the Obama administration proposed supplementing the aid with $2b. for Pakistan’s military.

The administration requested the supplemental aid despite criticism that economic assistance to Pakistan indirectly funds its nuclear project, since Pakistan is in an effective state of bankruptcy.

Moreover, a US Inspector-General’s Report published this week concluded that the $7.5b. in assistance has achieved little.

For their part, the Pakistani government and military adhere to a radically anti-American line, and Pakistan’s powerful ISI intelligence service and large sections of its military continue to maintain intimate ties with al-Qaida and the Taliban.

Pakistan has abdicated its sovereignty over its frontier provinces in hope of achieving peace there and leveraging the country’s numerous jihadist groups against India. They seem too busy with that to care about how much of a country they have left outside of their claims on Kashmir.

Last month, Pakistani police arrested US diplomat Raymond Davis in Lahore after he killed two gunmen who were reportedly about to rob him at gunpoint. Pakistani law enforcement officials have charged Davis with murder and refuse to release him to US custody, despite the fact that he should enjoy the protection of diplomatic immunity. Rather than attempt to quiet passions, the Pakistani government is fanning anti-American sentiments by among other things, releasing a videotape of Davis’s police interrogation.

To date, while members of Congress are beginning to threaten to curtail aid to Pakistanpending Davis’s release, the administration has limited its response to this de facto act of hostage-taking by Pakistan to refusing to hold high-level exchanges with Pakistani leaders. And even this limited response has been inconsistently implemented.

For instance, while US Secretary of State Hillary Clinton refused to meet with her Pakistani counterpart, Shah Mehmood Qureshi, at the Munich security conference last weekend, she did agree to meet with Gen. Ashfaq Kayani, the commander of the Pakistani military. So, too, the US ambassador in Pakistan met on Monday with Pakistani President Asif Ali Zardari.

Pakistan is a textbook example of a disaster of biblical proportions in the making. Its hyperactive nuclear expansion, weak central government, impoverished, radicalized population, and pro- Islamist military and intelligence arms are sources for major concern. That concern becomes all-out alarm in light of the Taliban/al-Qaida’s control over anywhere from a quarter to a third of Pakistani territory and the widespread public support for them throughout the country.

Since taking office, the Obama administration has failed to conceive of a strategy for contending with the situation. One of the main obstacles to the formation of a coherent US strategy is the Obama administration’s move to outlaw any discussion of the basic threats to US interests. Shortly after entering office, President Barack Obama banned the use of the term “War against terror,” substituting it with the opaque term “overseas contingency operation.”

Last April, Obama banned use of the terms “jihad,” “Islamic terrorism” and “radical Islam” in US government documents.

Given that US officials are barred from using all the terms that are relevant for describing reality in places like Pakistan, it is obvious why the US cannot put together a strategy for contending with the challenges it faces there. Imagine an intelligence officer in Peshawar trying to report on what he sees. Imagine a defense attaché in Lahore trying to explain the problems with the jihad-infested Pakistani military to his superiors in Washington.

Imagine a USAID officer trying to explain why the jihadist-mosque attending public refuses to work at US-funded highway programs.

The Obama administration’s decision to ban relevant language from the official US policy discourse was ideologically motivated. And in choosing ideology over reality, the Obama administration has induced a situation where rather than construct policies to deal with reality, at all levels, US officials have been charged with constructing policies to deny and ignore reality.

AGAINST THIS backdrop it becomes fairly clear why the Obama administration’s handling of the political turmoil in Egypt has been so incompetent.

Upon entering office, Obama made a determined effort to ignore the political instability percolating under the surface throughout the authoritarian Arab world. US government officials were instructed to curtail programs aimed at developing liberal alternatives to authoritarianism and the Muslim Brotherhood. The justification for this behavior was again ideological.

As the world’s biggest bully, the US had no moral right to judge the behavior of tyrants like Egyptian President Hosni Mubarak.

Once the dutifully ignored long-repressed popular discontent boiled over into the popular revolts we have seen over the past month in Tunisia and Egypt as well as Yemen, Jordan, Algeria and beyond, the Obama administration rushed to get on the “right side” of the issue. To avoid criticism for refusing to contend with the problems bred by Arab authoritarianism, Obama went to the other extreme. He became the most outspoken champion of unfettered popular democracy in Egypt. 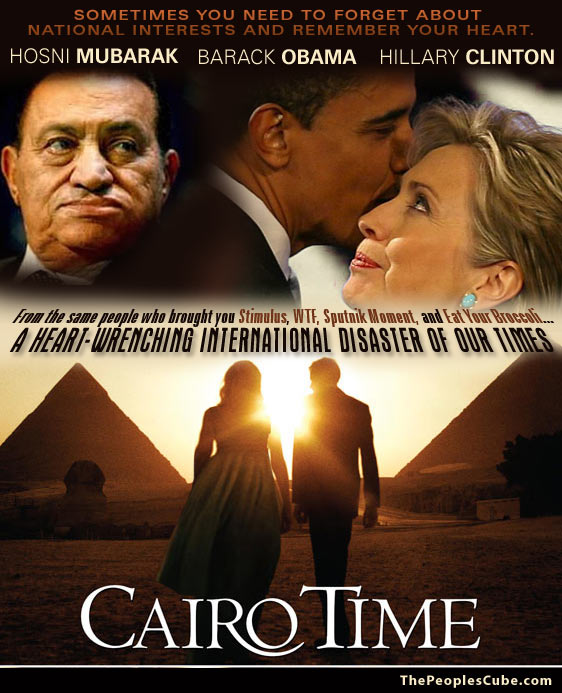 Of course, to occupy this other side of the spectrum, Obama has had to ignore the danger constituted by the most powerful opposition movement in Egypt. The Muslim Brotherhood’s hostility towards the US’s most fundamental strategic interests in the Middle East has been swept under the rug by the Obama administration and its supporters in the US media.

But then, in light of the prohibition of all discussion of the reasons the Muslim Brotherhood constitutes a threat to the US – its jihadist ideology of Islamic conquest, its genocidal Islamic-based Jewhatred and hatred of America, its support for Islamic terrorism against non-jihadist regimes throughout the Muslim world and against the West – it is not surprising that the Obama administration is embracing the inclusion of the movement in a post-Mubarak Egyptian regime.

How could the administration object to something it has chosen to ignore? The Obama administration’s ideologically driven strategic ineptitude is evident everywhere.

From its slavish devotion to appeasing Iran, its single-minded insistence on withdrawing from Iraq, its announced commitment to withdrawing from Afghanistan, to its tolerance of Hugo Chavez, and its infantile reset button diplomacy towards Russia, the Obama administration’s foreign policy is on a collision course with reality.

But nowhere is its premeditated incompetence more evident than in its obsession with the establishment of a Palestinian state west of the Jordan River.

So it was that during his visit in Israel this week, Obama’s recently retired national security adviser Gen. James Jones claimed that it is God’s will that Israel withdraw to indefensible borders, and effectively blamed the political turmoil in Egypt on the absence of a Palestinian state.

You will find that approximately 90% of people in the world today who call themselves Jews are actually Khazars, or as they like to be known, Ashkenazi Jews.  These people knowingly lie to the world with their claims that the land of Israel is theirs by birthright, when in actual fact their real homeland is over 800 miles away in Georgia.

As Jones put it, “I’m of the belief that had God appeared in front of President Obama in 2009 and said if he could do one thing on the face of the planet, and one thing only, to make the world a better place and give people more hope and opportunity for the future, I would venture that it would have something to do with finding the two-state solution to the Middle East.”

Jones then argued, “Time is not on our side, and a failure to act [in establishing a Palestinian state] may trigger other Egypt-like demonstrations in other countries in the region.”

The Obama administration is not alone in this completely irrational view. As the Arab world undergoes massive convulsions born of the legacy of authoritarianism and nourished by the pull of jihadism, all of Europe’s major statesmen are lining up behind Washington in pushing Israel to agree to surrender still more land to the PLO in order to establish yet another authoritarian, jihadinfested Arab state.

CONFRONTING THE Obama administration’s assault on reason in the interest of ideological faithfulness, Israel is faced with very few good options. The threats Israel faces stem largely from the rising forces of jihad, Islamic terrorism and religiously justified nuclear adventurism embraced by Islamist politicians and religious leaders. That is, the threats facing Israel stem largely from the forces the Obama administration has elected to ignore and deny.

Moreover, the Obama administration’s singular obsession with coercing Israel to surrender still more land to the Palestinian Authority means that America’s central Middle East policy involves demanding that Israel further strengthen the unmentionable forces of jihad at its own expense.

This fact was underlined this week with The Jerusalem Post’s Khaled Abu Toameh’s revelation that most senior PA leaders have recently applied for Jordanian citizenship. Clearly the likes of Mahmoud Abbas believe they will not be the winners if their repressive regime in Judea and Samaria is seriously challenged by their popular jihadist rivals in Hamas.

Our leaders are doubtlessly tempted to simply take the path of least resistance and join Obama and his merry band of blind men as they move from lie to lie to defend their ideology from reality.

But doing so will not protect us when the dangers sown by the US’s strategic dementia provoke the next conflagration.

Israel’s best option is to simply tell the truth as loudly and forcefully as it can and base our policies on it. While doing so will win Israel no friends in the Obama administration or in Europe, it will prepare us for the day when the wall of lies they are building from Islamabad to Cairo to Ramallah come crashing down.