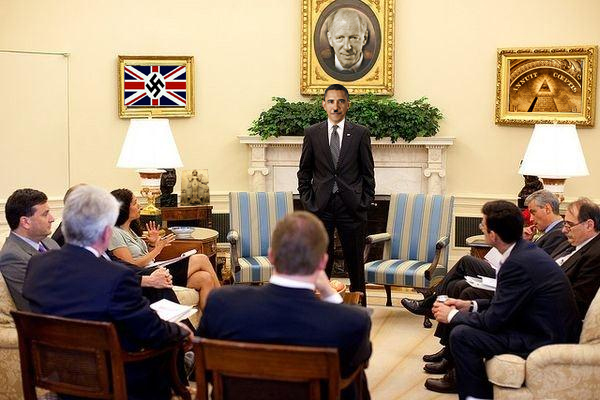 How embarrassing this must be for President Obama, whose major speech theme so far this campaign season has been that every single American, no matter how rich, should pay their “fair share” of taxes.

Because how unfair — indeed, un-American — it is for an office worker like, say, Warren Buffet‘s secretary to dutifully pay her taxes, while some well-to-do people with better educations and higher incomes end up paying a much smaller tax rate.

Or, worse, skipping their taxes altogether.

A new report just out from the Internal Revenue Service reveals that 36 of President Obama’s executive office staff owe the country $833,970 in back taxes. These people working for Mr. Fair Share apparently haven’t paid any share, let alone their fair share.

Previous reports have shown how well-paid Obama’s White House staff is, with 457 aides pulling down more than $37 million last year. That’s up seven workers and nearly $4 million from the Bush administration’s last year.

The IRS’ 2010 delinquent tax revelations come as part of a required annual agency report on federal employees’ tax compliance. Turns out, an awful lot of folks being paid by taxpayers are not paying their own income taxes.

The report finds that thousands of federal employees owe the country more than $3.4 billion in back taxes. That’s up 3% in the past year.

That scale of delinquency could annoy voters, hard-pressed by their own costs, fears and stubbornly high unemployment despite Joe Biden’s many promises.

The tax offenders include employees of the U.S. Senate who help write the laws imposed on everyone else. They owe $2.1 million. Workers in the House of Representatives owe $8.5 million, Department of Education employees owe $4.3 million and over at Homeland Security, 4,697 workers owe about $37 million. Active duty military members owe more than $100 million.

The Treasury Department, where Obama nominee Tim Geithner had to pay up $42,000 in his own back taxes before being confirmed as secretary, has 1,181 other employees with delinquent taxes totaling $9.3 million.

Do you know where Wesley Snipes {Blade} Is Now? He’s in prison for 3 years for tax evasion. Interesting eh? Where is Tax Evader Tom Daschle who wrote Obamacare? Where is tax evader Tim Geithner? Thats right They are free as a bird.

The country’s chief law enforcement agency, the Department of Justice, has 2,069 employees who are nearly $17 million behind in taxes. Like Operation Fast and Furious, Attorney General Eric Holder has apparently missed them too.

As with ordinary people, the IRS attempts to negotiate back-tax payment plans with all delinquents, whose names cannot be released. But according to current federal law, the only federal employees who can be fired for not paying taxes are IRS workers.

GOP: ‘Nothing wrong with the state of our Union’ that free Americans can’t fix