Hungary has taken a bold stand against biotech giant Monsanto and genetic modification by destroying 1000 acres of maize found to have been grown with genetically modified seeds, according to Hungary deputy state secretary of the Ministry of Rural Development Lajos Bognar. Unlike many European Union countries, Hungary is a nation where genetically modified (GM) seeds are banned. In a similar stance against GM ingredients, Peru has also passed a 10 year ban on GM foods.

Almost 1000 acres of maize found to have been ground with genetically modified seeds have been destroyed throughout Hungary, deputy state secretary of the Ministry of Rural Development Lajos Bognar said. The GMO maize has been ploughed under, said Lajos Bognar, but pollen has not spread from the maize, he added.

Unlike several EU members, GMO seeds are banned in Hungary. The checks will continue despite the fact that seek traders are obliged to make sure that their products are GMO free, Bognar said.

During the invesigation, controllers have found Pioneer Monsanto products among the seeds planted.

The free movement of goods within the EU means that authorities will not investigate how the seeds arrived in Hungary, but they will check where the goods can be found, Bognar said. Regional public radio reported that the two biggest international seed producing companies are affected in the matter and GMO seeds could have been sown on up to the thousands of hectares in the country. Most of the local farmers have complained since they just discovered they were using GMO seeds.

With season already under way, it is too late to sow new seeds, so this year’s harvest has been lost.

And to make things even worse for the farmers, the company that distributed the seeds in Baranya county is under liquidation. Therefore, if any compensation is paid by the international seed producers, the money will be paid primarily to that company’s creditors, rather than the farmers.

De-Populate To Reduce Obligations Of The Banking Cabal

The secret deal merges many aspects of each nation’s law enforcement and terrorism efforts, allowing authorities to operate on the opposite side of the border while beefing up border check surveillance. But there’s much more that we don’t yet know.

U.S. President Barack Obamaand Canadian Prime Minister Stephen Harper are set to meet next week in order to sign a thus-far secretive “Beyond Borders” pact between the United States and Canada– and surprisingly, the deal will mean not only new practices in border security, law enforcement and counter-terrorism but also in standards for food production, trade and commerce.

The 32-point border perimeter plan is clearly part of the North American Union agenda, but many observers also believe it will open the doors to many GM crops now banned in Canada and enhance the positions of dominant corporate players. However, the details of the agreement remain secret and will only be revealed once both heads of state sign the deal– negating the necessary process of public feedback and consent.

CTV describes the new joint effort’s leaked plan for “a new entry-exit control system that will allow the United States to track everyone coming and leaving Canada by air, land and sea.” Further, it would facilitate a merging of authorities on both sides of the border. The Toronto Starwrites, “U.S. Attorney General Eric Holder revealed last fall that the deal will authorize Canada and the U.S. to designate officers who can take part in police investigations on both sides of the border.” 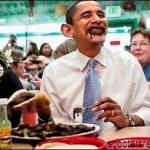 While the Canadian press has rightfully focused on the massive power grab and privacy concerns posed by the new system (Privacy Commissioner Jennifer Stoddart expressed concern, stating that “she hasn’t been consulted on the project”), the deal will also have enormous impact on trade and industry, especially food.

The 32-point plan also features more than just new border-crossing protocols… In fact, both nations plan to streamline and harmonize regulations in the automotive and food sectors.

While the immediate impact for the auto sector could mean, among other items, the adoption of “U.S. crash-testing standards for seat belts and built-in child booster seats,” there are scant details on what it would mean for food. However, many critics of the deal are concerned that it would eliminate barriers for aggressive biotech firms like Monsanto, who’ve thus far received a less than warm welcome in the great northern nation.

The Council of Canadians, a citizens action group, obviously fears an unwelcome invasion of biotechnology after monitoring announcements about the clandestine deal, writing:

“What kind of ‘regulatory alignment’ might we expect to see as a result of the Beyond the Border action plan? …the biotechnology industry association asked that both countries adopt ‘consistent science-based processes that would significantly decrease the time required for authorization of biotech crops and their products’; …several US agricultural groups asked for harmonization of the maximum permissible pesticide residue levels for produce.”

While GMO corn has gained acceptance in Canada already, farmers and activists have successfully fought or delayed the approval and entry of numerous other GMOs, including Monsanto’s recombinant bovine growth hormone (rBGH), GM alfalfa and have effected a court-ordered investigation of the effects of pesticides on amphibians, including Monsanto’s Round-up.

Monsanto vs. The Canadian Wheat Board

But the most notable victory against GMOs may be wheat, a major export in Canada worth more than $3 billion per year. It is the Canadian Wheat Board that got credit for fighting Monsanto against the potential effects of wheat contamination for the vast industry, and effectively prevented its entry into Canada.

“It has the potential to virtually destroy the $3.5-billion industry in Western Canada,” said Ian McCreary, a farmer and a director with the Canadian Wheat Board back in 2003.

By coincidence, the powerful Canadian Wheat Board was dismantled earlier this week, with many farmers now concerned about changes in market dynamics, and the potential for Big Agra corporations to move in.

Member of Parliament for the NDP, Romeo Saganash, writes this week:

The Wheat Board decision is just the beginning. They are coming after the dairy and egg boards. They won’t be satisfied until Viterra and Cargill and Monsanto control every bit of farmland in this country.

The fate of the wheat board may well relate to the recent Trans-Pacific Partnership (TPP) meetings, further integrating global trade and making non-membership a hazard to exports. QMI agency reportedthat “critics recently jumped the gun when they reported that the Harper government was prepared to bargain away supply managed sectors of the agricultural economy in the TransPacific trade talks.”

And yet the trend appears to be there. While the Obama and Harper administrations are working the U.S.-Canada ‘Beyond Borders’ agreement in secret, both are openly courting the Trans-Pacific Partnership talks to decide the Asian markets. Pacific trade would be tied to new openings in the wheat market, and observers say the tariff protected egg, chicken and dairy markets could be next:

Given the federal government’s ongoing attempt to dismantle the Canadian Wheat Board, it wouldn’t be a huge philosophical leap for them to agree to change the way the dairy and poultry industries work.

Indeed, Canadian papers are full of discussion on the topic, with pro-globalism articles blasting the country’s food tariffs and praising the new “freedom” for farmers no longer bound to the wheat board system, always with an eye on dairy and poultry.

Critics say consumers pay a heavy price for the protectionist policy, and they argue Canada won’t be able to strike an aggressive free-trade deal with Asia-Pacific countries because of strong objections from Canada’s trade partners who oppose the supply management system.

They also have argued it is inconsistent for Ottawa to liberalize western wheat markets while maintaining the protectionist system for the dairy, poultry and egg producers.

GMO Contamination As a Rationale for Market Penetration

Adding to this perfect storm to blast open the gates for the benefit of private biotech firms is a growing debate currently taking place in Canada and other parts of the world over the “low level presence” of GMOs– a buzzword being used in attempt to allow the importation of non-GMO crops contaminated at a low level with GM crops in countries that have banned GMOs. Take for example this analysis from a European Commission research center:

This study addresses a new issue in the commercialization of GM crops, namely the occurrence of traces—or “low-level presence” (LLP)—of nationally unapproved GM material in crop imports. The commercialization of GM crops is a regulated activity, and countries have different authorization procedures. Hence, new GM crops are not approved simultaneously. This “asynchronous approval” (AA), in combination with a “zero-tolerance” policy towards LLP, is of growing concern for its potential economic impact on international trade.

Once again the banner of globalism and “free trade” will put pressure for acceptance of GM crops. The LLP angle is a great half-measure and camel’s nose under the tent.

Farmers are rightfully outraged at the trend. This op-ed printed at BClocalnews.com cites the threat it poses to the growth of organic farming in Canada, cited here at an astounding overall industrial growth rate of 20 percent per year.

I am writing to state my strong opposition to federal government plans to allow so-called “Low Level Presence” of unapproved genetically engineered (GE or genetically modified, GM) foods in the Canadian food supply. This plan would not only undermine the work of Health Canada, but would undermine the entire organic agriculture industry in Canada, which is a major part of the overall industry and which is growing at about 20 per cent per year… It is unacceptable that our government would allow a percentage of GM foods into Canada that have not been approved by Health Canada.

What precise impact the looming U.S.-Canadian border pact will have for the food industry remains to be seen, but it is clear that the trend will have important consequences not only for the loss of sovereignty in both Canada and America, but for long-term health. The European Commission study found a huge growth curve for the presence and acceptability of genetically-modified crops on the global scene:

To forecast the future evolution of this issue, we compiled a global pipeline of GM crops that may be commercialized by 2015… While currently there are about 30 commercial GM crops with different transgenic events worldwide, it is expected that by 2015 there will be more than 120.

Clearly, the amount of successful resistance to GMOs among Canadians has posed a problem for biotech. So-called “free trade” agreements that actually form cooperative blocs, including the U.S. Canada effort and the concurrent Trans-Pacific Partnership, aid in breaking down the barriers of local resistance to trans-national agricultural planning. Biotech corporations are all to likely to seize upon this change, with sights on untapped Canadian markets.