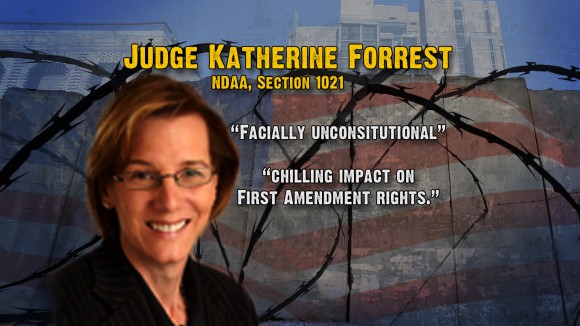 You’ll be surprised at some of the names listed below ~ because they all smile at you when they’re being interviewed!

After a long fought legal battle Americans have won a major battle against one of the most totalitarian NWO pieces of legislation in the history of the United States.

The most outrageous of those provisions allowed the United States government to place U.S. citizens in jail indefinitely without ever filing charges, providing access to a lawyer or even allowing those thrown in CIA torture prisons the opportunity to defend themselves against the allegations they are being detained.

That section of the NDAA has now been permanently blocked after a federal judge issued a final injunction banning the used of the indefinite detention provision in the so-called “homeland battlefield” bill.

The authority to do so was given because the bill gives the President the authority to conduct military operations in any country in the world, including inside the United States, to fight the so-called war on terror with the need for congressional approval to do so which is effectively a suspension of Posse Comitatus.

Back in January Journalist Chris Hedges filed a lawsuit against the Obama administration to fight the totalitarian powers given in the declaration of World War 3 known as the NDAA.

Given the fact the bill presented a clear and present danger to the US Constitution Hedges was joined by a coalition of activists and journalist.

Those journalist filed shocking briefs in the lawsuit detailing how the NDAA was being using to silence political dissent and journalism critical of the US government.

Per standard procedure the corporate media remained silent after not being given a press release from the government to parrot as the case went to trial.

Instead the Pentagon simply engaged in a psychological warfare operation on the internet which was the only place the lawsuit was being discussed which attempt to discredit proponents of the lawsuits as wing nut conspiracy theorists.

After the case was heard Obama revealed in court those conspiracy theorists were right and Obama planned on using the NDAA in the exact manner patriotic Americans feared it would be used – to detain American citizens in military detention indefinitely without charge or a trial.

As such US Judge Katherine Forrest ruled the NDAA provisions unconstitutionall and issued a temporary injunction prohibiting the use of NDAA military detention against American citizens.

Obama then openly defied the ruling claiming the ban on NDAA detention applied only to the plaintiff’s in the lawsuit.

Judge Forrest then issued another ruling clarifying the protection applies to all US citizens pending a final ruling.

Judge Forest even issued a follow-up warning stating she would find the Obama administration in contempt it had not complied with her previous ruling.

Obama appealed and fought back every step of the way failing to provide legal arguments beyond the vectors of national security secrecy and executive primacy in regard to foreign policy.

At the same time Obama refused to even assert that journalists would not be subject to the NDAA simply for their reporting while also refusing to define what actions constituted providing direct or indirect support for associated forces or who those associated forces were.

Obama appealed claiming the government had the right to determine as they see fit without judicial oversight while working under the cover of secrecy granted by national security through which the government could pick and choose U.S. citizens to detain without trial.

As Zero Hedge reports Obama’s appeals simply didn’t hold muster and as such Judge Forrest has issued a permanent injunction against the provision:

Back in January, Pulitzer winning journalist Chris Hedges sued President Obama and the recently passed National Defense Authorization Act, specifically challenging the legality of the Authorization for Use of Military Force or, the provision that authorizes military detention for people deemed to have “substantially supported” al Qaeda, the Taliban or “associated forces.” Hedges called the president’s action allowing indefinite detention, which was signed into law with little opposition fromeither party “unforgivable, unconstitutional and exceedingly dangerous.” He attacked point blank the civil rights farce that is the neverending “war on terror” conducted by both parties, targetting whom exactly is unclear, but certainly attaining ever more intense retaliation from foreigners such as the furious attacks against the US consulates in Egypt and Libya. He asked  “why do U.S. citizens now need to be specifically singled out for military detention and denial of due process when under the 2001 Authorization for Use of Military Force the president can apparently find the legal cover to serve as judge, jury and executioner to assassinate U.S. citizens.” A few months later, in May, U.S. District Judge Katherine Forrest ruled in favor of a temporary injunction blocking the enforcement of the authorization for military detention. Today, the war againt the true totalitarianterror won a decisive battle, when in a 112-opinion, Judge Forrest turned the temporary injunction, following an appeal by the totalitarian government from August 6, into a permanent one.

The permanent injunction prevents the U.S. government from enforcing a portion of Section 1021 of the National Defense Authorization Act’s “Homeland Battlefield” provisions.

The opinion stems from a January lawsuit filed by former New York Times war correspondent and Pulitzer Prize winner Chris Hedges and others. The plaintiffs said they had no assurance that their writing and advocacy activities would not fall under the scope of the provision.

Government attorneys argued that the executive branch is entitled to latitude when it comes to cases of national security and that the law is neither too broad nor overly vague.

“This court does not disagree with the principle that the president has primacy in foreign affairs,” the judge said, but that she was not convinced by government arguments.

“The government has not stated that such conduct – which, by analogy, covers any writing, journalistic and associational activities that involve al Qaeda, the Taliban or whomever is deemed “associated forces” – does not fall within § 1021(b)(2).”

What is ironic, is that in the ongoing absolute farce that is the theatrical presidential debate, there hasn’t been one word uttered discussing precisely the kind of creeping totalitarian control, and Orwellian loss of constitutional rights, that the biparty-supported NDAA would have demanded out of the US republic. Why? Chris Hedges said it best:

The oddest part of this legislation is that the FBI, the CIA, the director of national intelligence, the Pentagon and the attorney general didn’t support it. FBI Director Robert Mueller said he feared the bill would actually impede the bureau’s ability to investigate terrorism because it would be harder to win cooperation from suspects held by the military. “The possibility looms that we will lose opportunities to obtain cooperation from the persons in the past that we’ve been fairly successful in gaining,” he told Congress.

But it passed anyway. And I suspect it passed because the corporations, seeing the unrest in the streets, knowing that things are about to get much worse, worrying that the Occupy movement will expand, do not trust the police to protect them. They want to be able to call in the Army. And now they can.

He is 100% correct, and today, if it weren’t for his lawsuit, the saying that someone, somewhere in the world might possibly “hate America for its liberties” would have been the biggest lie conceivable.

Also, the total fascist takeover of America would now have been a fact.

Some other insights from Hedges, who explained back in January, just why he is suing Barack Obama:

This demented “war on terror” is as undefined and vague as such a conflict is in any totalitarian state. Dissent is increasingly equated in this country with treason. Enemies supposedly lurk in every organization that does not chant the patriotic mantras provided to it by the state. And this bill feeds a mounting state paranoia. It expands our permanent war to every spot on the globe. It erases fundamental constitutional liberties. It means we can no longer use the word “democracy” to describe our political system.

The supine and gutless Democratic Party, which would have feigned outrage if George W. Bush had put this into law, appears willing, once again, to grant Obama a pass. But I won’t. What he has done is unforgivable, unconstitutional and exceedingly dangerous. The threat and reach of al-Qaida—which I spent a year covering for The New York Times in Europe and the Middle East—are marginal, despite the attacks of 9/11. The terrorist group poses no existential threat to the nation. It has been so disrupted and broken that it can barely function. Osama bin Laden was gunned down by commandos and his body dumped into the sea. Even the Pentagon says the organization is crippled. So why, a decade after the start of the so-called war on terror, do these draconian measures need to be implemented? Why do U.S. citizens now need to be specifically singled out for military detention and denial of due process when under the 2001 Authorization for Use of Military Force the president can apparently find the legal cover to serve as judge, jury and executioner to assassinate U.S. citizens, as he did in the killing of the cleric Anwar al-Awlaki in Yemen? Why is this bill necessary when the government routinely ignores our Fifth Amendment rights—“No person shall be deprived of life without due process of law”—as well as our First Amendment right of free speech? How much more power do they need to fight “terrorism”?

Fear is the psychological weapon of choice for totalitarian systems of power. Make the people afraid. Get them to surrender their rights in the name of national security. And then finish off the few who aren’t afraid enough. If this law is not revoked we will be no different from any sordid military dictatorship. Its implementation will be a huge leap forward for the corporate oligarchs who plan to continue to plunder the nation and use state and military security to cow the population into submission.

← Obama The Genghis Khan Of The Rothschild Banking Cabal!
Hold Onto Your Lug Nuts: Remembering Bank Of America Closing 600 Branches & Putting 30,000 Americans Out Of Work. →