Wall Street deregulation, blamed for deepening the banking crisis, was aggressively pushed by advisers to Bill Clinton who have also been at the heart of current White House policy-making, according to newly disclosed documents from his presidential library.

The previously restricted papers reveal two separate attempts, in 1995 and 1997, to hurry Clinton into supporting a repeal of the Depression-era Glass Steagall Act and allow investment banks, insurers and retail banks to merge.

A Financial Services Modernization Act was passed by Congress in 1999, giving retrospective clearance to the 1998 merger of Citigroup and Travelers Group and unleashing a wave of Wall Street consolidation that was later blamed for forcing taxpayers to spend billions bailing out the enlarged banks after the sub-prime mortgage crisis.

The White House papers show only limited discussion of the risks of such deregulation, but include a private note which reveals that details of a deal with Citigroup to clear its merger in advance of the legislation were deleted from official documents, for fear of it leaking out.

“Please eat this paper after you have read this,” jokes the hand-written 1998 note addressed to Gene Sperling, then director of Clinton’s National Economic Council.

Earlier, in February 1995, newly-appointed Treasury secretary Robert Rubin, his deputy Bo Cutter and senior advisers including John Podesta gave the president three days to decide whether to back a repeal of Glass-Steagall.

In what Cutter described as “an action forcing event”, he wrote to Clinton on 21 February, telling him Rubin wanted to announce the policy before it was raised by the House banking committee on 1 March.

“It is therefore necessary to have an agreed-upon Administration position by the end of the day on Friday, 24 February.”

Podesta, who was then staff secretary but went on to become Clinton’s chief of staff, wrote a covering note telling the president that all his senior advisers backed the plan, although he noted the danger that “allowing banks to engage in riskier activities like securities or insurance could subject the deposit insurance fund to added risk”.

But Clinton’s advisers repeatedly reassured him that the decision to let Wall Street dismantle regulatory barriers designed to protect the public after the Great Depression simply represented inevitable modernisation.

“The argument for reform is that the separation between banking and other financial services mandated by Glass-Steagall is out of date in a world where banks, securities firms and insurance companies offer similar products and where firms outside the US do not face such restrictions,” wrote Podesta.

The Elites Responsible For Orchestrating The Destruction Of The Glass Steagall Act Of 1933:

This sea change in regulation was orchestrated by Sanford Weill and assisted by Robert Rubin, who became the second in command at Citibank after his stint at The U.S.Treasury.
Rubin, was Clinton’s Secretary of Treasury and was instrumental in getting The Gramm-Leach-Bliley Act passed. Larry Summers, was then his current Secretary Of Treasury who is now one of Obama’s economic “advisors”. What goes around comes around, they are all culpable.

“Commercial banks are not supposed to be high-risk ventures; they are supposed to manage other people’s money very conservatively,” writes Nobel Prize-winning economist Joseph Stiglitz. “It is with this understanding that the government agrees to pick up the tab should they fail. Investment banks, on the other hand, have traditionally managed rich people’s money — people who can take bigger risks in order to get bigger returns. When repeal of Glass-Steagall brought investment and commercial banks together, the investment-bank culture came out on top.

The Stooges That Wrote The Gramm-Leach-Bliley ‘Bill’ aka; Financial Services Modernization Act that is presently destroying the World.

Wall Street Bankers & Insurance Companies Got Stooges To Write A Bill To Repeal The Glass Steagall And Thus Loot The U.S. Citizens Depository Earnings Into Speculative High Risk Investments Were:

No need to study the Senate Or House Records to see if it was Democrat Or Republican as Gramm-Leach-Bliley passed with bi-partisan support. Those who clandestinely supported the bankers, and knew the *bill* would pass like Charles Schumer, would vote against the *bill* to maintain a “for the people image” for re-election.

Along with Cutter, who worked on Obama’s transition committee, all three men were close allies of Rubin, who spearheaded the deregulation of Wall Street before joining the board of Citigroup in 1999. In 2007, he briefly became its chairman.

The closeness of Obama’s team to the deregulation policies of the late 1990s is well known and has been criticised by campaigners as a reason for the current administration’s reluctance to institute more aggressive Wall Street reforms after the banking crash.

But the new documents cast fresh light on the way the White House was first ushered toward deregulation by the tight group of Rubin allies.

A similar apparent attempt to rush president Clinton’s decision-making occurred later in the process, in 1997.

In a letter received by the president on 19 May, Clinton is again given just three days to decide whether to proceed with the deregulation agenda.

“The attached memorandum asks you to authorize Treasury to proceed to announce and submit their financial services modernization proposal,” writes Sperling.

“Secretary Rubin intends to introduce the proposal in a 21 May speech, and to testify before the House Banking Committee the first week of June.” 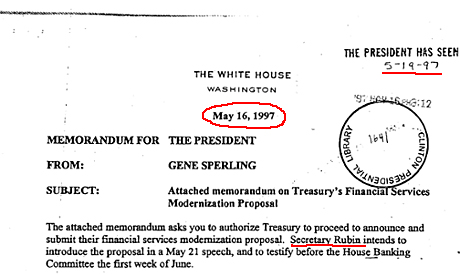 In his letter, Rubin reassures Clinton that the issue need not take up much of his attention.

“Should you approve our recommendation to move forward, the proposal would be a Treasury initiative, and would not require a significant time commitment from the White House,” writes the Treasury secretary.

“I and my staff will manage the process of advancing the proposal,” he adds. 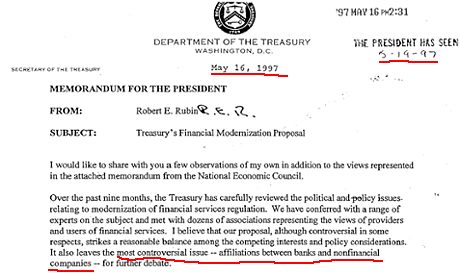 The sense that the president need not concern himself with the detail is amplified by his own staff, who appear happy for him to be pushed along by the Treasury timetable.

In a covering note from staff secretary Todd Stern, Clinton is warned: “The attached memo is long, detailed and technical, but you can get the essentials by looking at the first four pages.”

Stern adds: “If you agree. Treasury will, tomorrow, put out some advance word on the Rubin speech.”

Throughout the documents, which are among 7,000 pages released by the Clinton library on Friday, there is little discussion of internal opposition to repealing Glass-Steagall, although some memos inadvertently touch on the risks that ultimately proved so expensive to the US taxpayer.

“Notwithstanding the pounding Treasury took today, there’s still much to their position on the regulatory structure (which really depends on the proposition that we’re not good at regulating complex financial (let alone non-financial) companies, but we’re pretty good at walling off the bank to protect the taxpayers),” concludes Clinton adviser Ellen Seidman in one 1997 memo.