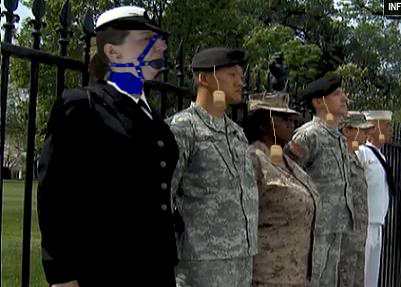 Transgender activist “Autumn” Sandeen (the man dressed in a woman’s uniform at left) and homosexual activist Lt. Dan Choi (second from left) join others in chaining themselves to White House gate Wednesday. The Obama administration has delayed responding to a request by Choi‘s National Guard commanders to discharge him.

Lt. Dan Choi (second from left)– homosexual activist, Iraq war veteran, and New York National Guardsman — continues to engage in illegal activism in ratcheting up his pressure campaign to homosexualize the  military in the name of “civil rights.” Choi’s latest protest Wednesday was another violation of the longstanding military policy of disallowing political actions in uniform (see earlier actions in the YouTube videos below).

We spoke with Maj. Kathy Oliver, a spokesman for Choi’s National Guard unit in New York, who relayed that his commanders — having already moved to discharge him last summer but awaiting the Defense Department’s delayed decision on the case — are not taking further actions against Choi for his ongoing public “civil disobedience” against the military. This appears to free up Choi to engage in more political stunts (in uniform) without additional cost.

Lt. Choi is caught up in a media-approved cause which he sees as a quest for “integrity” but which in reality is nothing but sexual deviancy activism. Homosexual behavior is immoral and degrading to the soul of those who practice it and to any institutions — including the Armed Forces — that “tolerate” it. Imagine what our military will become if — under Obama’s leadership — it capitulates to “queer” militancy and opens itself up to the full promotion of homosexuality at every level (in the name of “equality” and “nondiscrimination”).

Lt. Choi, this bright but confused and over-indulged young man, should be dishonorably discharged from the National Guard post haste. Failure to do so will only chip away at the morale of servicemen who might rightly wonder which other military codes will go unenforced due to Obama’s leftist political considerations. Matt Barber’s statement follows. — Peter LaBarbera, www.aftah.org

Matt Barber, AFTAH Board Member and Cultural Affairs Director for Liberty Counsel, who served 12 years in the Armed Forces, issued the following regarding the protest Wednesday at the White House. We’ll have more on Lt. Choi in upcoming posts:

“Don’t these one-trick ponies have any new material? America’s response: a collective eye-roll. We get it: you’re starved for attention. Seeing these overly pampered radicals hand-cuffed to the White House fence – wearing and dishonoring the military uniform in such a way – I was reminded of the Village People. (My apologies to the Village People.)

“Choi has now compounded the reasons for discharge from the Armed Services. Not only is he in open violation of federal law, which holds that homosexuality is incompatible with military service; he continues to disobey orders through his public activism — mocking, embarrassing and undermining his Commander-in-Chief. (Such protests are prohibited for active-duty servicemen under the UCMJ.) Yet Obama, rather than having the guts to toss out this insubordinate, media-hungry troublemaker, continues to pander to the militant Homosexual Lobby — effectively insuring with his promised repeal of Don’t Ask/Don’t Tell that the ranks of the Armed Services will overflow with equally obnoxious, San Francisco-style militants.”

← How To Fight Barry Soetoro aka; obama : Who Is In Direct And Intentional Violation To Criminal Standards, Against The United States Constitution And Fiduciary Laws/Duties!
Rockefeller’s Weak Link Bolsters Democrats Central Banking Scheme : John S. McCain (R-Az), Will You Please Go Now? →