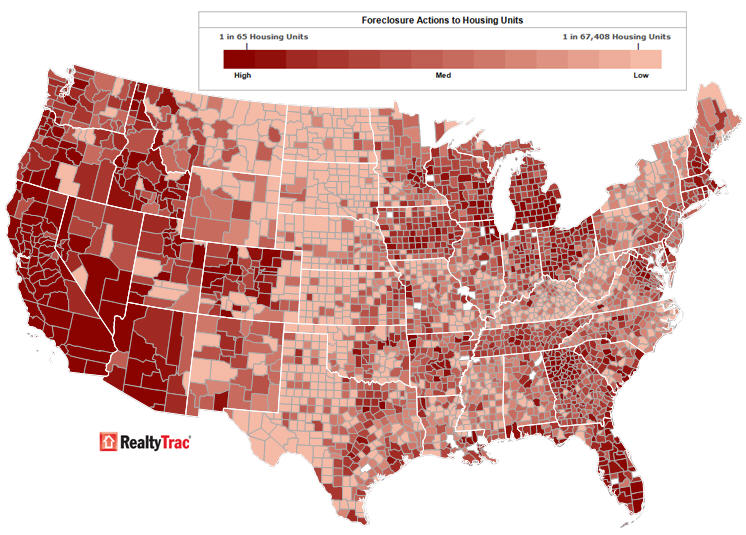 Many people may have thought that the massive wave of foreclosures must be over by now, roughly four years after the subprime mortgage crisis began. Most banks however were bending over backwards trying to make deals to avoid foreclosing on millions of other people. After giving people months, if not years of leeway, it’s become obvious these people won’t be getting good paying jobs anytime in the near future and the banks can’t just keep taking token partial payments on mortgages. Add to that, large numbers of newly laid off government workers –many of whom should have been downsized three years ago shortly after this financial crisis began.

A recent news article reports: “Banks have stepped up their actions against homeowners who have fallen behind on their mortgage payments, setting the stage for a fresh wave of foreclosures. The number of U.S. homes that received an initial default notice — the first step in the foreclosure process — jumped 33 percent in August from July, foreclosure listing firm RealtyTrac Inc. said Thursday. The increase represents a nine-month high and the biggest monthly gain in four years. The spike signals banks are starting to take swifter action against homeowners, nearly a year after processing issues led to a sharp slowdown in foreclosures.”

“Foreclosure activity began to slow last fall after problems surfaced with the way many lenders were handling foreclosure paperwork, namely shoddy mortgage paperwork comprising several shortcuts known collectively as robo-signing. Many of the nation’s largest banks reacted by temporarily ceasing all foreclosures, re-filing previously filed foreclosure cases and revisiting pending cases to prevent errors. Other factors have also worked to stall the pace of new foreclosures this year. The process has been held up by court delays in states where judges play a role in the foreclosure process, a possible settlement of government probes into the industry’s mortgage-lending practices, and lenders’ reluctance to take back properties amid slowing home sales.”

If the bank takes over a property, they are on the hook for the property taxes. Many banks have deliberately left properties that should be foreclosed in the name of the poor laid off people, who couldn’t make the payments and who are now living under bridges.

The article notes “A pickup in foreclosure activity also means a potentially faster turnaround for the U.S. housing market. Experts say a revival isn’t likely to occur as long as there remains a glut of potential foreclosures hovering over the market.”

In other words, the construction industry that also helped keep the economy afloat during the early part of the 21st century is going to stay in the toilet where it’s been for the past three years. All these millions of foreclosed homes going back on the market mean that no new construction (or construction jobs) are needed.

The article goes on “Foreclosures weigh down home values and create uncertainty among would-be homebuyers who fret over prospects that prices may further decline as more foreclosures hit the market. There are about 3.7 million more homes in some stage of foreclosure now than there would be in a normal housing market.”

One of the big items on The PC Agenda is for the federal government to find some way to take over all those millions of foreclosed homes and turn them into “Section 8″ housing for blacks, illegal aliens and other poor Third World invaders. Not only will the Feds steal millions of homes that White people had been paying for, they will get to shove large numbers of dangerous minorities into previously White neighborhoods –maybe just across the street from you.

This is another big reason why we don’t want Obama or a liberal Republican winning the 2012 election. We may be in a Depression, but things could be made much worse by a liberal federal government.

If Congress is serious about lowering the debt ceiling, there is no better place to start than with the Glass Steagall Act. Previous attempt was doomed, with the Democrats controlling both Houses. With The Republicans controlling The House, there is a chance to negate the debt accrued during the artificial derivative schemed Housing Bubble.

(Reuters) – In a decision that may slow foreclosures nationwide, Massachusetts’ highest court voided the seizure of two homes by Wells Fargo & Co and US Bancorp after the banks failed to show they held the mortgages at the time they foreclosed.

Bank shares fell, weighing on broader stock indexes, on fears the decision could threaten lenders’ ability to work through hundreds of thousands of pending foreclosures.

The Supreme Judicial Court of Massachusetts‘ unanimous decision on Friday upheld a lower court ruling. It is among the earliest cases to address the validity of foreclosures done without proper documentation.

That issue, including the use of “robo-signers” who approved foreclosure documents without reviewing them, last year prompted an uproar that led lenders such as Bank of America Corp, JPMorgan Chase & Co and Ally Financial Inc to temporarily stop seizing homes.

“A ruling like this will slow down the foreclosure process” for lenders, said Marty Mosby, an analyst at Guggenheim Securities in Memphis, Tennessee. “They’re going to have to be really precise and get everything in order. It doesn’t leave a lot of wiggle room.”

Wells Fargo and U.S. Bancorp lacked authority to foreclose after having “failed to make the required showing that they were the holders of the mortgages at the time of foreclosure,” Justice Ralph Gants wrote for the Massachusetts court.

In a concurring opinion, Justice Robert Cordy lambasted “the utter carelessness” that the banks demonstrated in documenting their right to own the properties.

Courts in other U.S. states are considering similar cases, and all 50 state attorneys general are examining whether lenders are forcing people out of their homes improperly.

Friday’s decision applies in Massachusetts, and need not be followed by federal judges or by courts in other states.

Nonetheless, “it will be certainly cited as persuasive authority by anybody in a similar scenario who’s trying to hold onto his home,” said Robert Nislick, a real estate lawyer at Marcus, Errico, Emmer & Brooks PC in Braintree, Massachusetts.

Analysts said the decision may also raise the specter that loans transferred improperly will need to be bought back.

“What they were doing was peddling these mortgages and leaving the paperwork behind,” said Michael Pill, a real estate partner at Green, Miles, Lipton & Fitz-Gibbon LLP in Northampton, Massachusetts who is not involved in the case.

The Massachusetts court rejected a request by the banks to apply the decision only in future cases, leaving homeowners already foreclosed upon without a remedy. Gants chided the banks for ignoring settled rules in their “rush” to sell mortgage-backed securities.

A spokeswoman for San Francisco-based Wells Fargo, Teri Schrettenbrunner, had no immediate comment on the decision.

U.S. Bancorp spokesman Steve Dale said the decision has no financial impact on the Minneapolis-based bank, which has “no responsibility” for the terms or means of transfer of mortgages used in the securitization trusts it oversees as trustee.

Martha Coakley, Massachusetts’ attorney general, praised Friday’s decision. “In their careless and hasty stampede to securitize loans, the banks moved at their own peril,” she said. “They should bear the brunt and the cost of the remedy.”

Bank shares recovered some losses after it was revealed that Maine’s highest court on Thursday allowed JPMorgan to conduct a foreclosure proceeding despite not having possessed the underlying mortgage until after that process began.

In the Massachusetts case, U.S. Bancorp and Wells Fargo had said they controlled through different trusts the respective mortgages of Antonio Ibanez and the married couple Mark and Tammy LaRace, who lost their homes to foreclosure in 2007.

The banks bought the Springfield, Massachusetts, homes in foreclosure, and sought court orders confirming they had title. A lower court judge ruled against them in March 2009.

“It is the first time the supreme court of a state has looked straight at securitization practices and told the industry, you are not immune from state statutes and homeowner protections,” Paul Collier, a lawyer for Ibanez, said in an interview.

Massachusetts is one of 27 U.S. states that do not require court approval to foreclose.

“I’m ecstatic,” Glenn Russell, a lawyer for the LaRaces, said in an interview. “The fact the decision applies retroactively could mean thousands of homeowners can seek recovery for homes wrongfully foreclosed upon.”

Russell said the LaRaces moved back to their home after the 2009 ruling, while Collier said Ibanez has not. “U.S. Bancorp will have to compensate him in exchange for the deed, or will have to walk away,” Collier said.

Analysts said the decision could make it harder to sell homes, and perhaps weigh on the nation’s economic recovery.

“The inventory on foreclosures will keep a lid on housing prices for some time,” said Blake Howells, head of equity research at Becker Capital Management in Portland, Oregon.

Gants did suggest in his opinion how banks might properly transfer mortgages via securitization trusts.

“The executed agreement that assigns the pool of mortgages, with a schedule of the pooled mortgage loans that clearly and specifically identifies the mortgage at issue as among those assigned, may suffice to establish the trustee as the mortgage holder,” Gants wrote. “However, there must be proof that the assignment was made by a party that itself held the mortgage.”

IT’S THE DERIVATIVES, STUPID!
WHY FANNIE, FREDDIE AND AIG WERE BAILED OUT.

It was preplanned to orchestrate the housing bubble and then to enslave The American Citizen to the Wall Street/British Monarchy International Banking Cartel, using WORTHLESS PAPER-DERIVATIVES AS CONTRACTS OF DEBT FOR THE ARTIFICIAL BAILOUT. THE GLASS STEAGALL WOULD INSTANTANEOUSLY NULL AND VOID THIS ORCHESTRATED DERIVATIVE DEBT AND PREVENT FUTURE OCCURRENCES BY THE COMMUNISTS SEEKING CENTRALIZATION OF AMERICA’S MONETARY SYSTEM.

The American Securitization Forum, a trade group, in a statement said it “is confident securitization transfers are valid and fully enforceable.”