The miserable, tiresome and genuinely wicked agenda of the “new world order” globalist conspiracy is alive and well in 2012, but don’t try to tell that to great pretender and “NWO establishment GOP candidate” Newt Gingrich.

Alex Jones has only spent the last 20 years acquiring footage of the infamous homo-erotic Bohemian Grove secret government club’s romps in the northern California forests of Sonoma County, just above San Francisco, whose homosexual community has long catered to the event with secret sexual favors. If you read the news and follow alternative news reporting, it would have been fairly impossible NOT to see news items about the exposure of Bohemian Grove since the late 1990s,  when Jones and many other truth researchers first began revealing what was taking place. Jones infiltrated the Bohemian Grove secret rituals time and time again between the late 90s and 2010, posting video of what he saw and heard each time.

There can only be two possible solutions to Newt’s duplicitous conundrum of publicly outed stupidity and “see-no-evil” behavior:

1) The Great Pretender: Either Newt Gingrich is lying his ass off to protect his secret NWO backers and the money they will give him to help him win …. or …

2) Newt doesn’t get out much and is one of the most poorly informed and clueless men in high government to ever run for the highest office in the land. He really genuinely does not know what tens of millions of other Americans now know about Bohemian Grove and the accompanying secret decadent “rituals” which are performed annually by high government officials from all over the world.

Which do you think it is?

Jeff Cohen and Norman Solomon tried to get confirmation that Gingrich attended the “saturnalia of juvenilia” (as Maureen Dowdof the New York Times put it), but they were spurned by Gingrich staff writer Robert George, who admitted Newt had attended but there was no transcript of his speech. 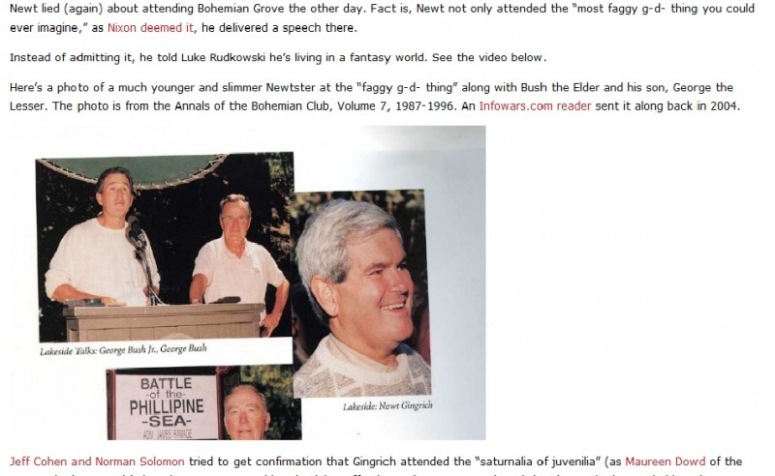