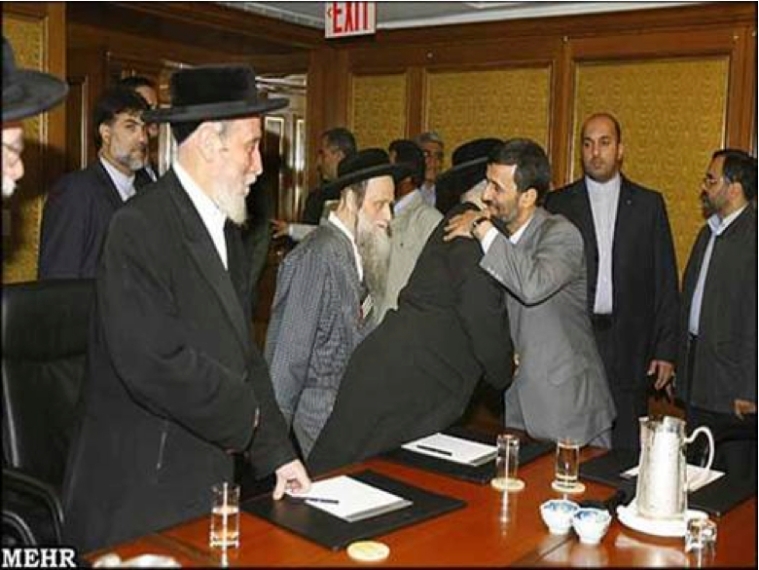 An article published in Lebanon’s The Daily Star, Bruce Riedel, who has advised four U.S. Presidents on the Middle East and South Asia and is now a senior fellow at the Brookings Institution in Washington, said the danger of war against Iran is growing. He said “Iran is rattling its sabers, the Republican Presidential candidates and others are rattling theirs. But even if Tehran gets the bomb, Israel will have overwhelming military superiority over Iran, a fact that should not be lost in all the heated rhetoric.”

Riedel, while he was advising President Obama on Afghanistan had said earlier the greatest threats to America’s security are the British terrorists who need no visa to come over to the United States.

He is echoing the voices of U.S. military officers and some others, who are concerned about the dangers that a war with Iran poses. The Chairman of the U.S. Joint Chiefs of Staff Gen. Martin Dempsey was in Israel recently where he sent a clear message: “Don’t attack Iran, and let the tougher sanctions take hold.”

“This is getting very dangerous,” said Jon Alterman, a former State Department official who runs the Middle East Program at the Center for Strategic and International Studies, as quoted in NPR radio on Jan. 19. “All the senior people I know in the U.S. government are starting to lose sleep over where this all might go.”

Riedel cited former head of Israel’s Mossad, Meir Dagan, saying, “Iran will not get the bomb until at least 2015. In contrast, Israel has had nuclear weapons since the late 1960s and has jealously guarded its monopoly on them in the region.”

Moreover, Israel will continue to enjoy the support of the world’s only superpower for the foreseeable future. Iran, in contrast, has no major power providing it with financial help. Its arms relationships with Russia and China have been severed by Security Council Resolution 1929, Riedel said.

Riedel concluded saying: “So, don’t let the hot air from Tehran or the Republican debates confuse the reality on the ground. Iran is a dangerous country but it is not an existential threat to either Israel or America.” 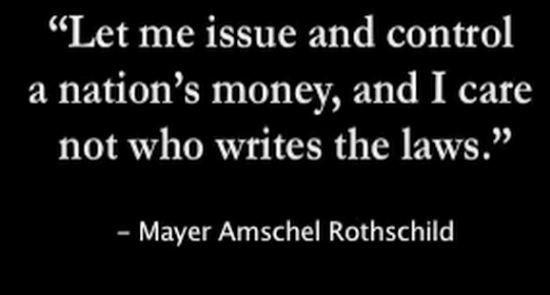 ‘As of the year 2000, there were seven countries without a Rothschild-owned Central Bank:

Then along came the convenient terror of 9-11 and soon Iraq and Afghanistan had been added to the list, leaving only five countries without a Central Bank owned by the Rothschild Family:

We all know how fast the Central Bank of Benghazi was set up.

The only countries left in 2011 without a Central Bank owned by the Rothschild Family are:

And these mono-maniacal speculators in the west, via their nuke-weaponed ally Israel, are blatantly gagging to get that “Central Bank of Iran” set up… you know it.’ 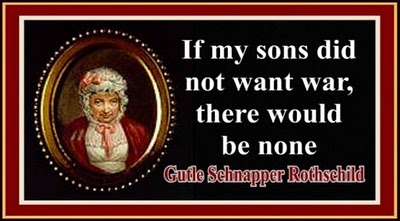 Response on Threat of War

Professor Bao Shixui, the former director of the Institute for Study of Military Thought at the China Academy of Military Sciences, sent the following two-part question to Lyndon LaRouche on the occasion of the State of the Union address webcast. Prof. Bao is a retired senior colonel in the People’s Liberation Army (born 1929), and in 1991 was one of six officers from across the Academy to receive the State Council’s Award for his outstanding contribution to military science.

“If Iran closes off the Strait of Hormuz at some point, will this immediately lead to a U.S.-Iran war? And since the United States just pulled away from the Iraq war, has the Obama Administration the actual possibility of opening another hopeless war in the Middle East?”

These are dangerous times, times in which simple truths are required above what might otherwise be considered as diplomacy. The actions against Libya taken on the orders of U.S.A. President Barack Obama were measures of warfare executed in violation of U.S. law, measures which would usually lead to Constitutional actions of punishment of the President by law.

The willful murder of a captive of the powers which had launched war against Libya, was a great crime, but that was not the limit of that crime.

The actions aimed to break up the nations of Libya and Iran, which have been recently pressed, were actually intended to set off the potential of a thermonuclear attack on Russia and other leading Eurasian nations, Russia and China most notably.

The facts of the case, and the principal features of their history are generally known among U.S. specialists in such matters.

In the meantime, fortunately, influential forces within the U.S. Presidential system have acted to check the brutal actions which had been intended by the British monarchy and its puppet-President of the United States, Barack Obama.

Without such important U.S. opposition to British imperial interests centered in the British Crown, the world would have been already mired in a post-Muammar Gaddafi, London-directed Israeli attack on Iran, which was intended to prepare the way for a thermonuclear war against Russia, China, and other nations of Asia.

Use of the concentration of the greatest mass of thermonuclear attack-capabilities directed against Russia and leading nations within Asia was intended to occur as sequels to military assaults against Libya and Iran.

A so-called “independent” Israeli attack on Iran was intended to set off the actions leading into a thermonuclear world war, with a key role intended for naval forces deployed into both the eastern Mediterranean and the Persian Gulf or slightly pulled back currently.

These developments have proceeded under the influence of a general financial breakdown-crisis of the trans-Atlantic sector of the planet.

The system of western and central Europe is presently in the process of disintegrating; the U.S.A. is immediately threatened, if not yet as desperately as Europe. I am persuaded that the present government of Russia is informed of most of the essentials of this global strategic situation.

The essential issue is this: Any major war among leading powers, and/or great combinations of powers will be thermonuclear in its essential features. If we can defeat such schemes as that, the greatest economic advances in world history will be an available option, including for the the trans-Pacific region.

Under those conditions, the leading strategic theme of the immediately oncoming generations will be strategically space-oriented missions, such as defense of planet Earth against natural dangers in nearby Solar space, and a pattern of accelerating measures in space, including a thermonuclear-driven week-long travel of a manned vehicle from Earth to the most attractive goal for us, namely Mars. 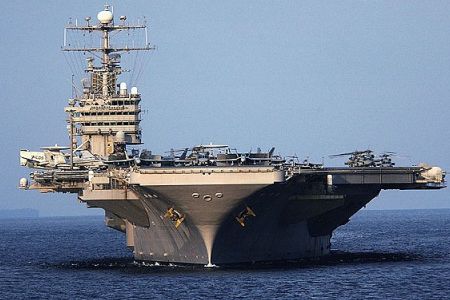 Britain and her NATO allies have chosen to remain silent in the face of Israeli regime’s terror plots as far as the issue of assassination of Iranian scientists is concerned.

Britain & NATO used to readily condemn most acts of assassination and terrorism around the world, but now that Israeli regime’s agents are involved, they have been remarkably reticent in condemning these heinous acts of terrorism, because U.S. president Barack Obama has described Israel as “America’s best friend”.

Both U.S. and the UK as well as other poodles like France, are dispatching their aircraft carriers and warships to the Persian Gulf and the Obama regime is sending thousands of troops to Israeli occupied Palestinian territories as part of a wider campaign to pressure Iran to abandon its peaceful nuclear program.

This pressure on Iran is not justified at all as Lindsey German, national convenor of the Stop the War Coalition in London says adding that the recent report by the UN atomic authority IAEA said quite categorically that there is no evidence of Iran developing a nuclear weapon.

Lindsey German told the Russian satellite TV channel Russia Today that the authorities in Britain, the U.S. and elsewhere are ignoring the report provided by the International Atomic Energy Agency (IAEA), and they are stepping up the pressure.

“The assassination of an Iranian scientist who worked in Natanz would be seen quite rightly as a provocation, and it would be seen as the work of Israelis and backed by the Americans. And the troops movements and the ships in the Persian Gulf, all of these, point to more pressure on Iran, and the Americans and the Israelis are playing a very very dangerous game here”, said the head of the Stop the War Coalition. 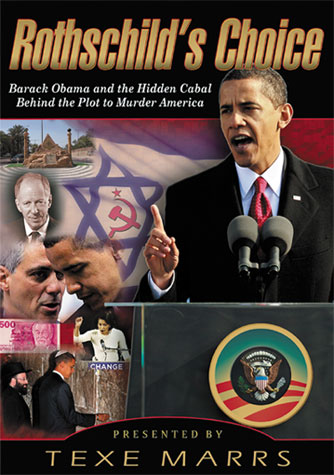 “The U.S. or , indeed, any other country should not be able to dictate to Iran that either they stop developing their nuclear energy program or they are threatened with war; this is not the job of any country in a civilised society.

It should be that people respect the rights of other countries, and after all Iran has been subject to a whole range of things. Iran is now subject to embargos on oil, and embargos on petrochemical products”, Lindsey German added.

The national convener of the Stop the War Coalition said: “it is absolutely well-known that the only entity with nuclear weapons in the Middle East is Israel, and yet Israel feels it has the justification for waging an airstrike or possible other forms of attack on a country which it accuses of wanting to develop the same weapons that it already has”.

Lindsey German called for a worldwide campaign to discourage Israeli terrorism from launching another war in the Middle East region and this time on Iran. 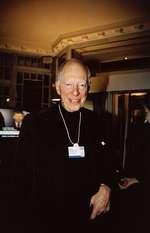