OUR GREATEST FOUNDING FATHER and first president, George Washington, probably wouldn’t be ready to celebrate his birthday on Feb. 22 if he were alive today. Having led the 13 colonies to independence from the British Empire in 1783, following the course of a difficult eight-year struggle by those freedom-loving American colonists who followed him, Washington (who lived from 1732 to 1799) would most assuredly be appalled to see that the liberties achieved from the American Revolution are now being flagrantly defied by a number of figures who populate the upper ranks of the administration of Barack Obama.

Six former Rhodes Scholars (educated at Oxford University in Britain) and four others associated with the London School of Economics are serving in key posts in the Obama administration. That’s not good.

Here are 10 of the key “British”—that is, Rothschild —operatives now ensconced in the Obama administration (more can be expected):

1) Susan Rice—ambassador to the UN;

2) Michael McFaul—head of the Russian desk at the National Security Council;

5) Neal S.Wolin—deputy counsel to the president for economic policy;

6) Ezekial Emanuel—senior counselor at the White House Office of Management and Budget on health care policy;

8) Peter Orszag—director of the Office of Management and Budget;

9) Peter Rouse—senior advisor to the president;

The truth about the Rhodes Scholarships is not known to the average American who is constantly told by the mass media that Rhodes Scholars (such as former President Bill Clinton) are among “the best and the brightest.”

The Rhodes Scholarships—awarded to Americans and students from other former British colonies—are funded by a trust set up by 19th Century British imperial figure Cecil Rhodes, whose intent was to indoctrinate these scholars with the theme that the American colonies should be reunited with the British Empire and that they should work through “public service” to achieve that goal. 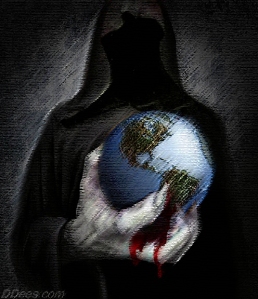 But Rhodes wasn’t just some rich madcap dreamer. His ventures were underwritten by the international Rothschild dynasty operating from the financial district in London known as “The City”—the banking center of the Rothschild controlled British empire that also includes the London School of Economics.

So now a clique of internationalists trained in the idea of extinguishing American independence are ensconced in the Obama administration.

And another Rhodes Scholar, Louisiana Gov. Bobby Jindal, is widely touted as the great Grand Old Party candidate to “take back the White House” in 2012. Jindal doesn’t offer “change.” He—like the other globalists in the Obama administration—is part of the problem.

The Separation of Powers of the Constitution favor State law. Jindal does not have to wait for any approval from the general government to build 80 miles of sand barriers to keep oil out of the State’s Wetlands.

In Hans v. Louisiana, the Supreme Court of the United States held that the Eleventh Amendment re-affirms that states possess sovereign immunity and are therefore generally immune from being sued in federal court without their consent. In later cases, the Supreme Court has strengthened state sovereign immunity considerably. In Blatchford v. Native Village of Noatak, the court explained that

we have understood the Eleventh Amendment to stand not so much for what it says, but for the presupposition of our constitutional structure which it confirms: that the States entered the federal system with their sovereignty intact; that the judicial authority in Article III is limited by this sovereignty, and that a State will therefore not be subject to suit in federal court unless it has consented to suit, either expressly or in the “plan of the convention.”

All of this is not a “conspiracy theory.” Rather, these facts are well known to those familiar with what the Rhodes scholarships are really about.