The formerly solid wall of Republican opposition to any tax increase has now been breached by Tom Coburn and it is up to The American Citizen to repair it and plug it up! 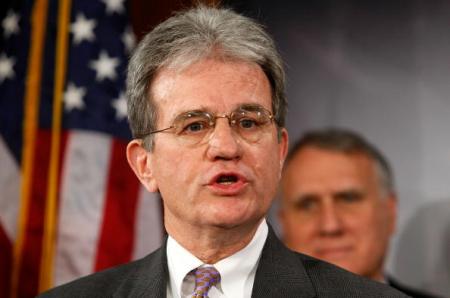 In fact, the record is the exact opposite!  Tax increases dampen economic growth (particularly during a recession) and never bring in the revenue they are supposed to.  And, because they hurt the economy, they increase mandatory entitlement spending on Medicaid, welfare, unemployment compensation, and food stamps, thereby eradicating any spending cuts that may have accompanied them.

Coburn, Crapo and Gregg’s vote endorses and sends to Congress a report that calls for a nine-year tax hike of $1.3 trillion, raising the federal tax burden permanently to 21% of GDP as opposed to the average of 18% to date (source: Americans for Tax Reform).

It even eliminates Congressional control over tax increases.  They would become automatic after 2013 unless the Commission’s proposals are implemented.

The Commission called for higher tax rates, reduces indexing of tax brackets for inflation, raises the capital gains tax from 15 to 23%, raises Social Security taxes by up to 50% for taxpayers making up to or over $150,000 a year, doubles gas taxes, and makes inheritance taxes at 45% permanent.

Coburn, Crapo, and Gregg had done great harm to our cause by endorsing the idea that a “centrist” approach of combining tax increases and spending cuts is the answer to our deficit.  Their approach would lock in Obama’s massive increase in government spending.

When Obama took office, federal, state, and local governments combined accounted for 35% of our economy.  Now they are up to 45%, ahead of Britain and Germany!  We must roll this back through spending cuts, not ratify it through tax increases.

Judd Gregg is retiring and Coburn and Crapo were just re-elected.  Neither said anything about endorsing big tax increases as soon as the ballots were cast.  They hid their true intentions from us!

Please, drown Coburn and Crapo in letters and phone calls to protest their betrayal of our cause!!  We must make sure that they do not back these tax increases on the floor of the Senate!!!  And that their defection does not encourage other RINOs to break ranks!

Published on DickMorris.com on December 6, 2010