Some years ago, I worked on a big case in Alaska and spent a lot of time there. At that time, the local bar was buzzing about a lawyer who had a really bad day in court: he was kicked to death by a moose in the parking lot of the federal courthouse in Anchorage. Solicitor General Donald Verrilli didn’t have that bad a day today in the U.S. Supreme Court, arguing that Arizona’s immigration law is invalid by virtue of federal pre-emption, but he was kicked about a good bit by the justices.

On Twitter, Byron York asked: “Question for legal types: Is Donald Verrilli bad at his job or just burdened by having to defend the indefensible?” You can read the entire argument hereand draw your own conclusions, but in my opinion, the problem was not with Verrilli but rather with the quality of the arguments that he was required to make by his client, the Obama administration.

News reports have focused on an exchange in which Justice Sotomayor, an Obama appointee, spoke for the Court in expressing open skepticism about Verrilli’s argument:

JUSTICE SOTOMAYOR: Can I get to a different question? I think even I or someone else cut you off when you said there were three reasons why — 2(B). Putting aside your argument that this — that a systematic cooperation is wrong — you can see it’s not selling very well — why don’t you try to come up with something else? Because I, frankly — as the chief has said to you, it’s not that it’s forcing you to change your enforcement priorities. You don’t have to take the person into custody. So what’s left of your argument?

Justice Sotomayor was commenting here on an extraordinary aspect of the Obama administration’s position, to the effect that it is OK if individual Arizona law enforcement officers decide to cooperate with federal immigration authorities, but if the state directs themall to cooperate, it is somehow unconstitutional. The Obama administration literally argued that for a state to engage in “systematic cooperation” with the federal government on immigration is unlawful. We can’t blame Mr. Verrilli for his inability to sell that bizarre argument. We do blame Barack Obama and Eric Holder for trying to assert it.

Of course, what is going on here is that the Obama administration doesn’t want to enforce the immigration laws that Congress has enacted. The essence of its position in the Arizona case is that the federal government has the right to decide not to enforce the law, and if it so decides, then no state has the power, under the Constitution, to do anything that would tend to enforce those federal laws. So if the Obama administration decides that it will gain political advantage by ignoring federal laws against illegal immigration, states like Arizona just have to take the consequences without complaining.

That proposition–the real essence of the Obama administration’s case–is not one that can survive the light of day. Thus, near the end of Verrilli’s argument, Justice Kennedy cut to the chase:

JUSTICE KENNEDY: So you’re saying the government has a legitimate interest in not enforcing its laws?

GENERAL VERRILLI: No. We have a legitimate interest in enforcing the law, of course, but it needs to be — but these — this Court has said over and over again, has recognized that the — the balance of interest that has to be achieved in enforcing the — the immigration laws is exceedingly delicate and complex, and it involves consideration of foreign relations, it involves humanitarian concerns, and it also involves public order and public –

That answer was incoherent, obviously, but not because Verrilli is a fool; rather, because the Obama administration’s position is indefensible. Later, Justice Scalia followed up:

JUSTICE SCALIA: So we have to — we have to enforce our laws in a manner that will please Mexico. Is that what you’re saying?

So the Obama administration had a tough day in court today, and deservedly so. Let’s hope that the Supreme Court’s majority opinion in this case delivers President Obama the stinging rebuke that he so richly deserves.

UPDATE: Ironically, the Obama administration’s sheer incompetence is the one factor now mitigating our illegal immigration problem–an unintended consequence of the fact that Obama completely fails to understand economics: 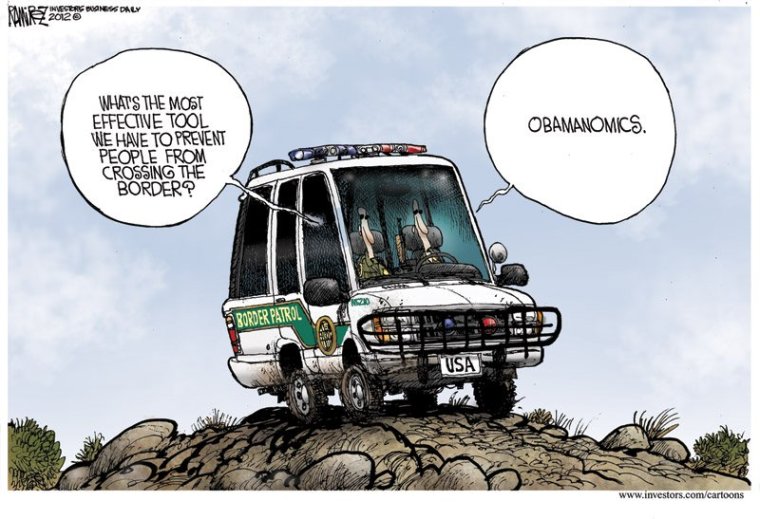 ← Remembering When GOP Tommy Coburn Voted For MASSIVE Tax Hikes!!
NATO And XE aka; BlackWater ‘Death Squads’, Hired By Obama To Kill People In Syria: Creating Terrorism As Pretext For War While Violating The U.S. Constitution. →