Almost one year later, the legendary town of Tombstone, Arizona is no closer to beginning the repair of waterlines destroyed as a result of widespread forest fires and mudslides. Unearthing pipelines from as much as twelve feet of mud and boulders, and repairing aqueducts destroyed in the Monument Fire of 2011, ought to be daunting enough for a town of 1,500. But, throw in the bureaucratic nightmare of the US Forest Service and it becomes an all but impossible task.

As if to further prove Jeffrey Tucker’s argument that “the [modern] state works to reverse progress in every possible way,” the feds have declared that any work to repair the pipelines will have to be done using equipment straight out of the 19th Century. According to The Goldwater Institute, which has sued the US Forest Service on behalf of Tombstone, the city was told it would have to use “horses and hand tools to remove boulders the size of Volkswagens.”

The town currently relies on ground wells to survive, but there is an insufficient supply to protect the town in the event of more disasters. City manager George Barnes said their present situation “doesn’t allow for a building fire, a well-pump failure; it doesn’t allow for much of anything.”

Agenda 21 means The U.N. Scheme to dissolve U.S. citizen ownership of rural land ~ so they can run Rothschild Government Farms like they did in Russia & Nazi Germany to keep the “people” at bay ‘serfdom’.

At issue for the feds is the spotted owl, and other endangered species, whose habitat is in the mountains near Tombstone. Of course the fires and floods destroyed their habitat, but rules are rules, right?

While such legal challenges can be successful at times, they are hardly the only remedy available. Indeed, it can be argued that asking a federal judge, in a federal courtroom, to curtail a federal agency is one of the least effective and logically unsound ways to go about solving problems caused the federal government. But before we get into the details of how states and local organizations can free themselves from the grasp of federal bureaucrats, let’s examine first the problems in dealing with the feds on their own terms. 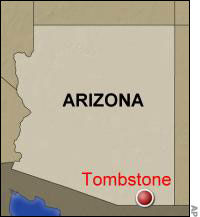 Money: it often comes down to who has more. The Goldwater Institute and similar organizations are not-for-profit entities, which means their funding is necessarily limited. By choosing to take the forestry service to court, they divert resources – money, energy, and time – away from other endeavors. In economic terms this is referred to as opportunity cost. And, it very well may be that those finite resources mentioned above could be put to better use elsewhere.

The federal government, on the other hand, is not limited by the same constraints as private institutions. The government isn’t actually paying any of the bills. In a sick twist of irony, the citizens of Arizona will be forced to help pay for the federal government’s defense, along with every other taxpayer in the country. It’s bad enough they have to pay the salaries of those standing in the way of recovery. Furthermore, the feds have no property at stake here, the way Tombstone residents do. The bureaucrat’s livelihood is not dependent on the outcome of the case in the same way that ranchers, real estate developers, and homeowners’ lives will be affected.

Even if money weren’t an issue, the system itself isn’t even set up in such a way as to ensure judicial impartiality. Tenthers are well-acquainted with the problems, but for the uninitiated, a brief summary: The federal courts are hardly an impartial venue, and federal judges aren’t exactly objective arbitrators. The federal government is a disputant in the case, so the idea that it should judge the outcome on its own turf is laughable when the analogue of two neighbors arguing over a boundary dispute is considered. If one’s brother is appointed the arbitrator, who could believe he won’t be naturally biased one way or another?

But even if The Goldwater Institute is ultimately successful with its suit, it could take many years to finally be resolved; by that time it may be too late. The whole issue was brought on as a result of wildfires and rainstorms. More bad weather could exacerbate the problems and ruin those struggling to hold on. Even if no further harm comes from Mother Nature, the fact that drinking water is barely available means that an extended trial and appeals process is equally unacceptable.

And what happens if the federal courts toss out the case or side in favor of the feds? What recourse will Tombstone have? Instead of even asking these questions, let’s move outside of that stupid box and refuse to throw ourselves at the mercy of politically well-connected lawyers in black robes. We should instead ask: what would a less costly and more effective solution look like?

Well, the state has already begun reasserting it’s authority over the natural resources found within its boundaries.

A bill in the senate would essentially reclaim the mountain springs under dispute and allow property owners to restore infrastructure damaged last year. This is a good first step, having the state begin interposing on behalf of residents, but other options exist for those affected by this bureaucratic nightmare.

Municipalities could take similar action, either legislatively or in bypassing the legal system entirely and just beginning the repairs. A recent bill that went before Arizona Governor Jan Brewer would have empowered sheriffs to act as a buffer between federal agencies and local citizens. Governor Brewer sided with the feds and vetoed the bill earlier this month, but such measures could be used in the future.

Finally, there is something to be said of simply ignoring the decrees of the Forest Service and, rather than use such arcane equipment as horses and hand shovels, drive backhoes and bulldozers into the mountains and clear the mudslides out. Since when do we prostrate ourselves before federal agencies that, contrary to their stated purpose, are constantly undermining and usurping the rights of the people?

The issue here is not simply that an historic town may run out of water. The prevailing message coming from the feds is that individuals and their property are secondary to the dictates of faceless bureaucrats, who are unaccountable to the people forced to pay their salaries. That a private organization should even have to file a lawsuit against the United States to allow rebuilding after a natural disaster reveals just how grotesquely expansive the Rothschild controlled federal government has been allowed to grow.

The people of the state of Arizona should stop asking for permission to use their resources and their own property. They should nullify the fed’s illegitimate claim on the land and move to secure it under the constitution’s Tenth Amendment, and by the authority granted to individuals through natural law.

Joel Poindexter is a student working toward a degree in economics. His writing has been published by the Ludwig von Mises Institute, LewRockwell.com and the Tenth Amendment Center. He lives with his wife and daughter near Kansas City. See his blog. Send him mail.