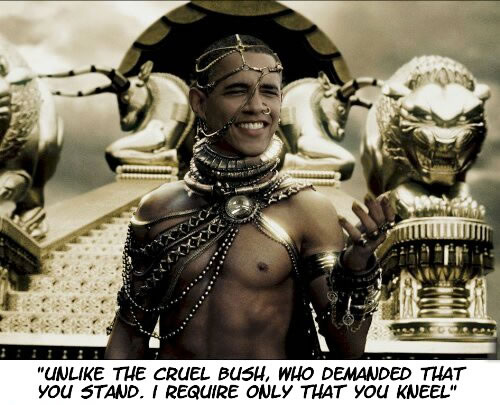 How’s that working out?

In his second day in office, he overturned Reagan‘s Mexico City Policy, freeing up foreign aid money to be used for abortions. Planned Parenthood now receives half of a billion dollars a year in your tax money.

At this year’s National Prayer Breakfast, the President stopped just short of crediting Jesus Christ with authorship of the Communist Manifesto.

So why were Catholics shocked when a week later,when he added another course of bricks to what Reagan called “the Wall of Hostility to religion” by decreeing that Catholic charities pay for practices which their religion classifies as sin?

Hopefully, in subsequent elections, Catholics will choose not to vote for, much less idolize any politician that favors the monstrous practice of abortion. Will a politician who doesn’t respect innocent human life have any regard for the first amendment? Does a bear shit in the woods?

Its Official: Katie Couric’s Islam, Passes Law Allowing Assassination Of Anyone Who “insults” Muhammad ~ Who BTW, Was Poisoned To Death In 610 A.D. For Murdering A Jewish Woman’s Family.

Rothschild’s Use Of Islam, To Shake The Piggy Banks Of The World: You Can Slaughter Christians, But You Can’t Burn A Koran.