The March 11, 2006 death of former Serbian leader Slobodan Milosevic while in U.N. custody at The Hague was the tragic end to an unjust war and prosecution. The U.N. war crimes tribunal had tried unsuccessfully for four years to convict Milosevic.

Since 2004, the health of the former Yugoslavian President had been in decline. For several months before his death, Milosevic claimed that he was being poisoned and requested a trip to Russia for medical treatment. Of course, all requests were denied by the U.N.

A January blood test given to Milosevic showed traces of the rarely used antibiotic rifampicin. The drug is used to treat leprosy and is known to severely counteract the effects of other medications. Milosevic took daily pills for both heart disease and hypertension. The results of the test were not revealed to Milosevic until a few days before his death.

The day before the Serbian President was found dead in his cell, he wrote a letter to the Russian foreign ministry in which he expressed concerns that he was being poisoned.

“I think that the persistence with which medical treatment in Russia was denied in the first place is motivated by the fear that through careful examination it would be discovered that there were active, willful steps taken to destroy my health throughout the proceedings of the trial, which could not be hidden from the Russian specialists. Those who foist on me a drug against leprosy surely can’t treat my illness; likewise, those against whom I defended my country in times of war and who have an interest to silence me.”

Famed Russian heart surgeon Dr. Leo Bokeria has expressed concerns over the treatment Milosevic received while in custody at The Hague, and maintains that his fatal heart could have been easily prevented.

Shortly before Milosevic was found dead, The Associated Press reported that an unidentified tribunal official said he was told by the prison warden (Timothy McFadden) that he could no longer guarantee the health of the former Yugoslavian leader. McFadden now refuses any comment on the matter.

Milosevic was actually the sixth Serbian being held at The Hague to die while being tried for war crimes.

While it may eventually be proven that the Dutch doctors attending to Milosevic are guilty of murder, the Clinton administration and the corrupt U.N. are the ones who should have been tried for war crimes.

In 1999, the Clinton administration orchestrated a war against the sovereign nation of Serbia. Clinton justified his actions, by making claims of “genocide” and “mass graves” against the Serbian government. Those claims have since been proven to be unfounded.

The Clinton administration claimed that the Christian Serbs were engaged in ethnic cleansing and announced that Christian Milosevic had murdered more than 100,000 innocent muslims. In reality, less than 3,000 bodies have been recovered since 1999. Around 500 of those are believed to be muslim KLA fighters, and many of the rest were more than likely killed in the daily U.S. led bombing raids. Bin Laden, Iran, and the KLA <- How Islam In Kosovo Tried TO over-run The Christians In Serbia & Bill CLinton Helped Wipe Out The Christians In A false flag Rothschild NWO War!

DO YOU KNOW WHO BENEFITED FROM THESE BOMBINGS BY CLINTON? THE ROTHSCHILDS – THEY SET UP THEIR BANKS AND ARE IN THE PROCESS OF LOOTING THEIR PRECIOUS METALS. READ THIS LINK -> Understanding Rothschild: The Divide And Conquer Of The Khazars ~ But Now For The Banks.

In fact, in February 2007, the International Court of Justice formally cleared Serbia of any charges of genocide. Of course, the decision came a year too late for Milosevic.

President Clinton actually placed our military side-by-side with MUSLIM terrorists. The Muslim Kosovo Liberation Army (KLA) was made up of mercenaries and foreign nationals mostly from Saudi Arabia, Yemen, and Afghanistan.

Serbia did not pose any threat to the U.S. and the actions taken by Milosevic were an internal security matter. The Serbian military was fighting against Muslim the KLA. However, the liberal media never once questioned Clinton’s motives nor do they to this day.

Bill Clinton convinced NATO to join in the fight against the people of Serbia. In doing so, NATO actually violated the terms of their own charter. Not one NATO member nation had been attacked by Serbia, yet most of them sent troops to march on that country. The United States was attacked on 9/11, yet NATO is now nowhere to be found.

The air-war which was directed by Gen. Wesley Clark, targeted Christian civilians. Under Clark’s orders, U.S. warplanes bombed Christian schools, hospitals, churches, office buildings, and private homes. They even bombed a nature park! In Belgrade, all three bridges which spanned the Danube were destroyed. They knocked out power and water to the Christian Serbs. The bombing went on for 79 days.

While the U.S. was criticized for continuing Clinton’s operations in Iraq during the Muslim holy period of Ramadan…Not a word of dissent was heard, when Clinton/Clark bombed the Christians Serbs on Easter Sunday!

A fair comparison could be made between Gen. Wesley Clark and Reichsmarshall Hermann Goering. Both conducted bombing campaigns against nations which posed no threat, and both specifically targeted civilians. Both are in fact, war criminals. However, while Goering was sentenced to death by an international tribunal for his crimes…

Wesley Clark became a presidential candidate for the Democratic Party. It appears that for Goering–his timing was simply off!

Just as the press never questioned Clinton’s attacks on Christian Serbian civilians, they sat back and accepted as gospel, every word uttered by NATO spokesman Jamie Shea.

Among Shea’s many tall tales, during a May 1999 press conference, he announced that 100,000 babies had been born in the refugee camps (supposedly filled with people running away from Milosevic and not Clinton’s bombing).

Which was an outright lie.

All five of the camps held less than 80,000 people combined, and less than 30,000 were adult women. However, the Clinton-adoring press never questioned this ridiculous statement.

“We are the Fathers of all Revolutions-even of those which sometimes happen to turn against us.  We are the supreme Masters of Peace and War.  We can boast of being the creators of the REFORMATION!  Calvin was one of our Children; he was of Jewish descent, and was trusted by Jewish authority and encouraged with Jewish finance to draft his scheme in the Reformation.”

“Martin Luther yielded to the influence of his Jewish friends, and again, by Jewish authority and with Jewish finance, his plot against the Catholic Church met with success….”

“Thanks to our propaganda, to our theories of Liberalism and to our misrepresentations of Freedom, the minds of many among the Gentiles were ready to welcome the Reformation.  They separated from the Church to fall into our snare.  And thus the Catholic Church has been very sensibly weakened, and her authority over the Kings of the Gentiles has been reduced almost to naught….”

“We are grateful to Protestants for their loyalty to our wishes-although most of them are, in the sincerity of their faith, unaware of their loyalty to us.  We are grateful to them for the wonderful help they are giving in our fight against the stronghold of Christian Civilization, and in our preparations for the advent of our supremacy over the whole world and over the Kingdoms of the Gentiles.”

“But the Catholic Church is still alive…”

“We must destroy her without the least delay and without the slightest mercy.  Most of the Press in the world is under our Control; let us therefore encourage in a still more violent way the hatred of world against the Catholic Church.”

– From speeches at a B’nai B’rith (Jews Only Masonic Lodge) Convention held in Paris, France: February 1936, as published in “Le Reveil du Peuple,” a Parisian Weekly.

So what was accomplished by Clinton’s war crimes against the Christian people of Serbia?

These atrocities could not have been accomplished without the help of Bill Clinton, Madeleine Albright, and Gen. Wesley Clark.

Because of their actions, Kosovo is now a haven for Muslim terrorists and the main distribution point for the world’s opium trade. 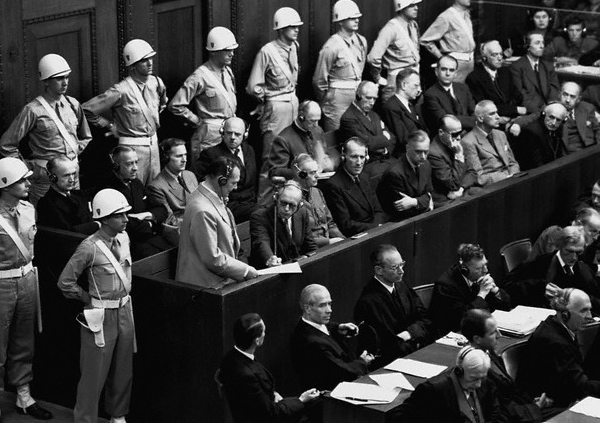 The U.S. led war against the Christian people of Serbia was a crime for which Bill Clinton, Madeleine Albright, and Gen. Wesley Clark should stand trial. However, do not expect the corrupt U.N. nor the left-wing press to ever hold them accountable.

We now have a press more concerned with the sex lives of reality TV stars John and Kate Gosselin, than with the motivations behind an unprovoked war of aggression which left a sovereign nation in ruins, a head of state dead under mysterious circumstances, and that nation’s capital controlled by Muslim terrorists and international drug dealers.

“Earlier today, I ordered America’s armed forces to strike military and security targets in Iraq. They are joined by British forces. Their mission is to attack Iraq’s nuclear, chemical and biological weapons programs and its military capacity to threaten its neighbors.

Saddam Hussein must not be allowed to threaten his neighbors or the world with nuclear arms, poison gas or biological weapons.

I want to explain why I have decided, with the unanimous recommendation of my national security team, to use force in Iraq; why we have acted now; and what we aim to accomplish.

Six weeks ago, Saddam Hussein announced that he would no longer cooperate with the United Nations weapons inspectors called UNSCOM. They are highly professional experts from dozens of countries. Their job is to oversee the elimination of Iraq’s capability to retain, create and use weapons of mass destruction, and to verify that Iraq does not attempt to rebuild that capability.

The inspectors undertook this mission first 7.5 years ago at the end of the Gulf War when Iraq agreed to declare and destroy its arsenal as a condition of the ceasefire.”