No one should doubt that Russia is serious about maintaining its strategic nuclear capability. Friday, the Russians demonstrated their seriousness by testing all three legs of their nuclear triad, in one day. The tests apparently began with the launch of a Topol ICBM from the Plesetsk space center in northern Russia. “The purpose of the launch was to confirm stability of Topol missiles’ flight and technical characteristics under the plan to extend their service life to 24 years and to assess the possibility of extending the missiles’ service life to 25 years,” Col. Vadim Koval, spokesman for the Russian Strategic Missile Forces (RVSN), told Interfax news agency.

First Topol intercontinental ballistic missile from the Plesetsk space center in northern Russia, maybe best used as a deterrent Of The Depopulators Known As Rothschild’s Banking Cabal In The City Of London!

RUSSIA PUTIN & IRAN AHMADINEJAD, ARE BOTH SOVEREIGN AKA; FREE FROM ROTHSCHILD BANKING CABAL.

“The warhead hit the target with a high accuracy over the Kura military ground in Kamchatka.” RVSN commander Col. Gen. Sergei Karakayev has said that the intention is to extend the life of the Topol missiles until 2019, when they are to be replaced by the new Yars mobile ICBM.

The land-based ICBM force remains the most important leg of the Russian nuclear triad, but the Russian government is intent on maintaining and modernizing the other two legs as well. The ballistic missile submarine “St. George” fired an R-29R missile from the Sea of Okhotsk to its target area in the Barents Sea, roughly 6,000 kilometers away. A spokesman for the Russian Navy told Interfax that the launch was carried out to confirm the technical characteristics of the missile and the submarine.

This is reported to have been the first test launch of a submarine- based missile this year, compared to seven such tests last year, including five of the new Bulava missile. Meanwhile, Russian TU-160 and TU-95 strategic bombers successfully fired four air-launched cruise missiles at targets in the Pemboy test range in the Komi Republic. A Defense Ministry spokesman told Interfax that the firings demonstrated “the highest level of preparedness” of strategic aviation aircrews.

Three days earlier, on Oct. 16, the Russian Air and Space Defense Forces (VKO) successfully carried out a test of the A-135 missile defense system, from the Sary Shagan test center in Kazakhstan. A spokesman for the VKO said that the goal of the test was to confirm technical characteristics of the currently deployed systems. The A-135 is deployed around Moscow. 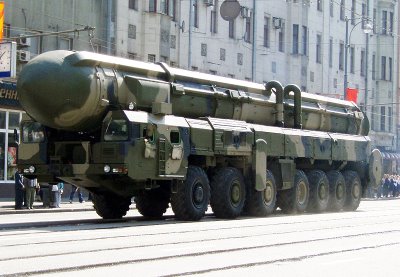