A very different picture emerges contrary to MSM about the real state of Christianity ~ just-out Pew report, “The Global Religious Landscape.” There are a number of fascinating realities and details in the study, but it’s worth examining what it indicates about the place of Christianity in the world. And, based on this data, the world’s largest religion is doing just fine.

For simplicity’s sake, let’s examine what the visualizations of Pew’s research show us. (You’ll notice that the data is from 2010; it’s not up-to-the-minute, but, given the challenges of a global survey and the slow rate at which global trends move, it’s still relatively current.) First, here is a chart of the world’s major religions by number of adherents.

Christians are by far the largest group, followed by Muslims. That difference of 8.3 percent might not sound like much, but keep in mind that 8.3 percent of the global population amounts to hundreds of millions of people. If you exclude the “unaffiliated,” then Christians make up about 37.6 percent of all religiously affiliated people on Earth.

Now let’s look at where Christians are the majority. This map colors different countries by their majority religion, with Christian-majority countries in red:

Whoa! The global reach of Christianity is pretty hard to miss. The entire Western hemisphere is majority Christian, as is virtually all of Europe, much of sub-Saharan Africa, even small parts of Asia. If you lived in one of those green or yellow countries, do you think Christianity would look threatened to you?

Asia, of course, is the big exception to Christianity’s otherwise common status as majority religion. But there are huge numbers of Christians even there. Here’s a surprising chart breaking down where the followers of each religion live. You’ll notice that most religions are concentrated in one or two specific regions. But not Christianity:

Christianity is the only religion in the world with a major presence on every continent. The Christians of Asia are not particularly visible on the above map; they are populous but comparatively small minorities in the world’s two biggest countries, India and China. They also account for a sizable part of the world’s fourth largest country, Indonesia.

Amazingly, there are actually more Christians in the Asia-Pacific region than in Christian-dominated North America: 287 million and 267 million, respectively. Here’s a map of regional Christian populations. Europe, Africa, and Latin America have half a billion each: 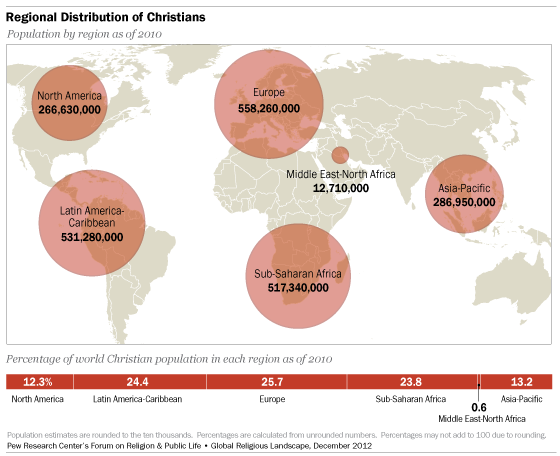 Even with this wide dispersal, particularly in Asia, a Christian in today’s world has a seven-in-eight chance that he or she lives in a majority-Christian country. That’s an astounding fact given that Christians are spread so wide across the world. This chart shows the majority and minority rates of each of the world’s major religions:

In this majority-minority metric, Christians are exceeded only by Hindus, whose status is unsurprising given that most Hindus are concentrated in a single country, India. By comparison, about three out of every four Muslims are among the majority in their country; many of the minority Muslims live in majority-Christian countries, particularly in Europe. Buddhists – I admit I was surprised by this – are even more likely than Jews to be the minority religion.

So where do Christians live? The answer, particularly if you watch O’Reilly, might surprise you: The world’s largest home to Christians is the United States. But there are other surprises here: 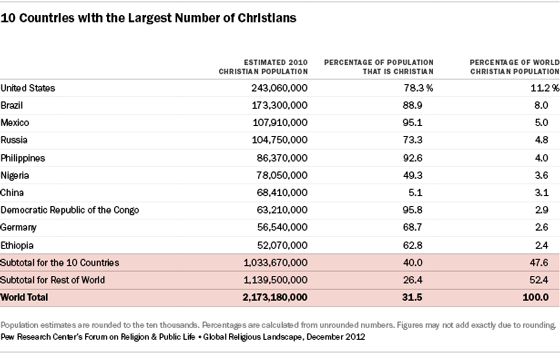 This data is likely to provide little comfort to the handful of Christian communities,particularly in countries such as Iraq, that are facing real persecution. But, overall, the story of Christianity in today’s world is still one of vast majorities, enormous populations, and historically unique reach. If there truly is a war on Christmas or any other facet of Christianity, then, in global terms, it doesn’t seem to be doing very well.