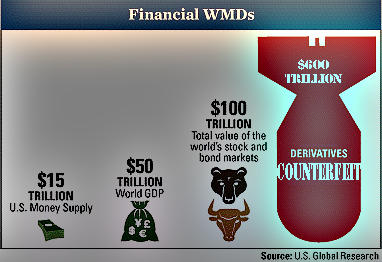 The London Based Banking Cartel (Rothschild), Are Attempting To Hide Their Counterfeit Currency aka; (Derivatives) by A Scheme Called “New World Order”.  They have weekend countries with derivatives, only then to bail them out with more derivatives. In the U.S. Bill Clinton Repealed The Glass Steagall Act Giving The Green Light For Rothschild To Engorge America With Counterfeit aka; Derivative Mortgage Debt causing The Housing Bubble.

Lieberman Must Live With A Traitor’s Conscience!

Do you want to know the real reason banks aren’t lending and the PIIGS [Portugal, Ireland, Italy, Greece, Spain] have control of the barnyard in Europe?

It’s because risk in the $600 trillion derivatives market isn’t evening out. To the contrary, it’s growing increasingly concentrated among a select few banks, especially here in the United States.

In 2009, five banks held 80% of derivatives in America. Now, just four banks hold a staggering 95.9% of U.S. derivatives, according to a recent report from the Office of the Currency Comptroller.

THE ILLNESS OF COVET AKA; HOARDING

” We are on the verge of a global transformation. All we need is the right major crisis and the nations will accept the New World Order. ” – David Rockefeller

They will covet, as if they were to begin a new race of fourscore years. The less journey they have to go, the greater provision they make.

REMEMBER OCTOBER 17, 2013 IS THE BACK STOP TO THE PRINTING CURRENCY MIRAGE’

Derivatives played a crucial role in bringing down the global economy, so you would think that the world’s top policymakers would have reined these things in by now – but they haven’t.

Instead of attacking the problem, regulators have let it spiral out of control, and the result is a $600 trillion time bomb called the derivatives market.

The notional value of the world’s derivatives actually is estimated at more than $600 trillion. Notional value, of course, is the total value of a leveraged position’s assets.

This distinction is necessary because when you’re talking about leveraged assets like options and derivatives, a little bit of money can control a disproportionately large position that may be as much as 5, 10, 30, or, in extreme cases, 100 times greater than investments that could be funded only in cash instruments.

The world’s gross domestic product (GDP) is only about $65 trillion, or roughly 10.83% of the worldwide value of the global derivatives market, according to The Economist. So there is literally not enough money on the planet to backstop the banks trading these things if they run into trouble.

“The world’s gross domestic product (GDP) is only about $65 trillion, or roughly 10.83% of the worldwide value of the global derivatives market,” <<– and that my friends is why there is a problem…