The amount of leverage in the U.S. Dollar fiat currency system reached an all time high in 2013. Even though the growth in total U.S. currency more than doubled since the collapse of the Housing and Investment banking system in 2008, the majority of the increase was from just one bill in particular.

U.S. Department of Engraving and Printing issued more $100 Federal Reserve Notes in 2013, than in any year prior. Of course, part of the reason was due to the new $100 anti-counterfeit bill released in 2013, but the increased trend for the largest bill has been going on for decades.

The chart also points out the obvious, who needs $1 bills anymore…LOL?? In 1993, the U.S. Treasury printed 3.5 billion $1 Notes, but in 2013, this fell nearly in half to 1.8 billion. In order to understand the huge leverage now in the U.S. Fiat Currency System, we need to look at the following table:

Now, if we fast forward to 2013, not only has the overall Dollar amount in currency printed increased more than three times since 2003, the $100 bill represents a staggering 94% of the total. Basically, the U.S. Treasury has fallen in love with printing the largest denomination bill that it has in its repertoire. I would imagine, if we brought back the $500 bill, it could seriously cut down on printing costs.

As I mentioned before, part of this huge increase in $100 bill printing was to exchange the old $100 bill with the new anti-counterfeit Federal Reserve Benjamin Franklin Note. But, if we go back prior to the release of the new $100 bill, there were nearly 2 billion of the old $100 Federal Reserve Note printed in 2010.

To get an idea of just how much monopoly money the U.S. Treasury printed via its $100 Federal Reserve Note, take a look at the following chart: 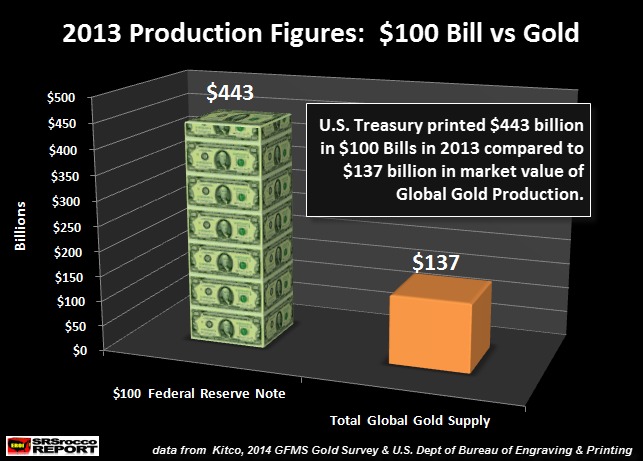 The total face value of the $100 bills printed in 2013 amounted to $443 billion. Now, compare this to the total market value of all the gold produced in the world that very same year. According to GFMS 2014 Gold Survey, the world produced 3,022 metric tons of gold in 2013.

Doing some simple arithmetic, we have the following:

The average price of gold in 2013 (according to Kitco.com) was $1,411 an ounce and if we multiply it by 97.1 million oz, the total market value was $137 billion. Which means, the U.S. Treasury printed more than 3 times the face value in $100 bills compared to the total market value of all the gold produced in 2013.

CONFUCIUS SAYS: It pays to have the biggest printing press in the world….

And of course the U.S. Treasury is quite proud of this achievement as their website is called none other than:

LOL… I kid you not. If anyone feels inclined to verify these figures, you’re more than welcome to go to the U.S. Department of Engraving and Printing website and do so at the link above.

One more interesting TIDBIT. According to the Federal Reserve, it costs 13.1 cents to print each $100 bill. Even though the total face value of the $100 bills printed in 2013 were $443 billion, the cost was just a mere $580 million… basically one-tenth of a percent of the cost of the face value.

If we extrapolate this further, at the current price of gold (including the HUGE MOVE UP TODAY) of $1,170 an ounce, it would take twelve $100 bills to purchase an ounce of gold…. with a little change left over. However, if we compare the costs below, we can see owning PHYSICAL GOLD is a much better and safer deal when the Fiat Monetary FAN finally hits the COW EXCREMENT:

When (not if) the U.S. Fiat Monetary System collapses, anyone holding onto twelve $100 Federal Reserve Notes would have a net worth of $1.56 in printing cost. Compare that to the estimated $1,100-$1,200 an ounce cost for gold.

I would bet my bottom Silver Dollar that when faith in holding U.S. Federal Reserve Notes heads into the toilet, it would be much wiser to own REAL MONEY than the monopoly paper printed by the MoneyFactory.gov.

Please check back for new articles and updates at the SRSrocco Report. You can also follow us at Twitter