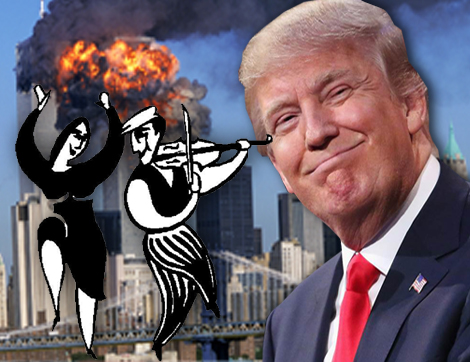 The Mossad surveillance team made quite a public spectacle of themselves on 9-11.

The New York Times reported Thursday that a group of five men had set up video cameras aimed at the Twin Towers prior to the attack on Tuesday, and were seen congratulating one another afterwards. (1)

Police received several calls from angry New Jersey residents claiming “middle-eastern” men with a white van were videotaping the disaster with shouts of joy and mockery. (2) “They were like happy, you know … They didn’t look shocked to me” said a witness. (3)

[T]hey were seen by New Jersey residents on Sept. 11 making fun of the World Trade Center ruins and going to extreme lengths to photograph themselves in front of the wreckage. (4)

Dave Gahary speaks with the police officer responsible for arresting the “Dancing Israelis” on September 11, 2001, who were caught filming and celebrating while the World Trade Center burned and people died.

Trump, said Martin “has a lot of energy, he’s a Trump guy, he’s on our side.”

Martin Hill and investigative journalist had been following the Trump campaign for weeks, eagerly awaiting an opportunity to confront the leading GOP candidate on Trump’s controversial statements regarding alleged reports of Muslims in America celebrating the 9-11 attacks.

Hill’s dedication and patience paid off in a major way at a recent Trump rally in Grand Rapids, Michigan, where the courageous journalist openly confronted Trump about the “dancing Israelis” and Israel’s central role in planning, executing, and most certainly benefiting from the events of 9-11.

“Trump’s comments about alleged ‘cheering Muslims’ made me angry because I saw it as nothing more than an amplifying of the Zionist propaganda that Americans have been inundated with for the past 15 years,” Hill told AFP.

“There is one purpose of this: to perpetuate the fear and support of the neocon imperial agenda of endless wars in the Middle East, the tyrannical police state in America, and blind support for the Israeli lobby and their diabolical geopolitical agenda.”

Hill originally traveled to a Trump rally in South Carolina with the hopes of confronting the GOP frontrunner.

“In South Carolina, I had a chance to shake Trump’s hand—he signed my bumper sticker—and I asked him about the undue influence of the Israeli lobby in America, and if he would put a stop to it for us,” Hill explained.

Trump simply refused to answer Hill’s entirely legitimate and direct question, which only fueled his determination to confront the controversial and politically incorrect presidential contender.

“When Trump went to Michigan, I spent a great deal of time, effort, and expense to be there to once again confront him,” Hill told AFP.

“I was almost directly in front of the podium in which Trump was speaking, and I shouted: ‘You listen to me, Trump!’ To my shock, he actually quit talking and looked at me, in this stadium with a capacity crowd of 9,000 people, waiting to hear what I would say.”

Incredibly, Trump actually listened to Hill, and described him as a “Trump guy” with “a lot of energy.” Hill was shortly thereafter escorted out of the rally.

“The people need to know the truth about 9-11, a monumental false-flag event, which involved the Central Intelligence Agency and Israel, with the full consent of our government,” Hill stated. “As a Catholic, I believe that the American people should learn about the ‘Just War Doctrine’ of St. Augustine, and promote peace among nations. We have an obligation to speak the truth.”